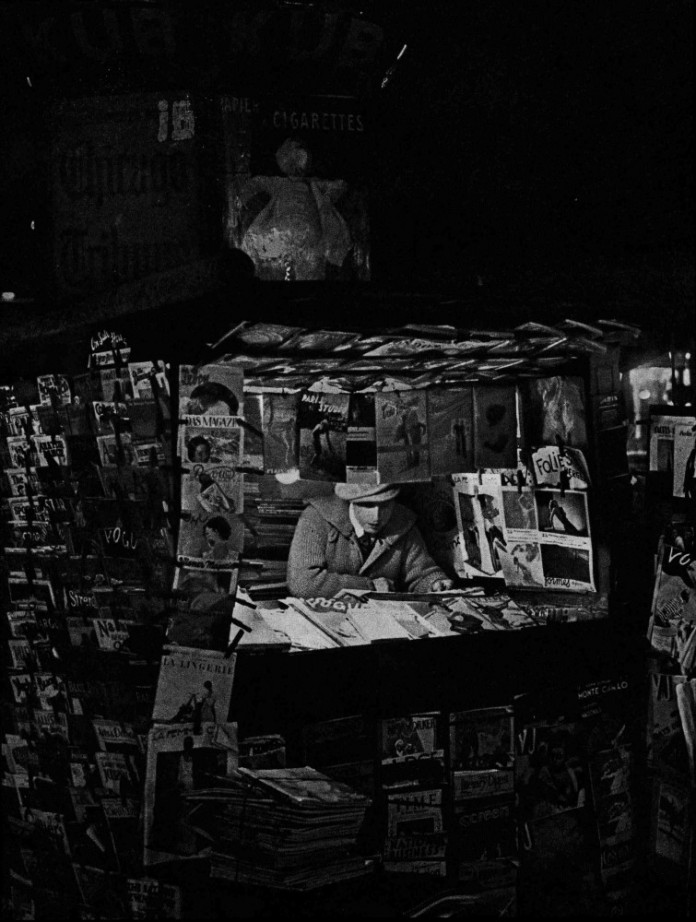 A beautiful new edition of Brassaï’s classic book of urban photography, Paris by Night, shows both the bright and dark sides of Paris as seen through the eyes of a talented young artist who fell under the city’s spell.

When 25-year-old Gyula Halász arrived in Paris from his native Hungary in 1924 he’d been trained as an artist and soon found his way into the circles frequented by Picasso, Miró, Dalí and Henry Miller. Continuing his work as a sculptor and painter, he supported himself by working as a journalist, adopting the pseudonym of Brassaï, derived from the name of his native city, Brassó. Obliged to use photography for his assignments, he initially disliked the medium, but eventually started to appreciate its aesthetic capabilities. Roaming the city at night, he brought his camera along and began to capture the unique flora and fauna of nighttime Paris.

While his images reflect the glitter and gaiety the city was famous for—the brilliantly lit grand staircase of the Opéra on a gala night, the Eiffel Tower blazing with lights in the shape of shooting stars, cancan girls doing high kicks at the Bal Tabarin, Brassaï also included the grittier side of Paris by night: a row of clochards sleeping under the colonnade of the Bourse de Commerce; an elderly homeless woman dressed in the tattered remnants of her former finery; a ragpicker crouched on the cobblestones, digging through a trashcan.

Shooting at night was a technical challenge, and the photographs display an intriguing variety of light sources—gas lamps and their reflections in the Seine, a glowing brazier, the sparks of a workman’s grinding tool, a burning building with silhouetted firefighters, a checkerboard of lighted and dark windows on a facade.

In 1933 Brassaï published 64 of these scenes in his first book of photographs, Paris de Nuit, which became an immediate hit. For that book, which was designed by Brassaï himself, the photographs were reproduced using a process called heliogravure.

This new edition gives us the same images and, according to the publisher’s statement, “uses the latest engraving technology to reproduce faithfully the quality of the original photographs”. The black-and-white photographs, printed on matte black pages, have a misty, dreamlike, almost magical look, a perfect match for their poetic content. Brassaï himself described it best: “The surreal effect of my pictures was nothing more than reality made fantastic through a particular vision. All I wanted to express was reality, for nothing is more surreal.”