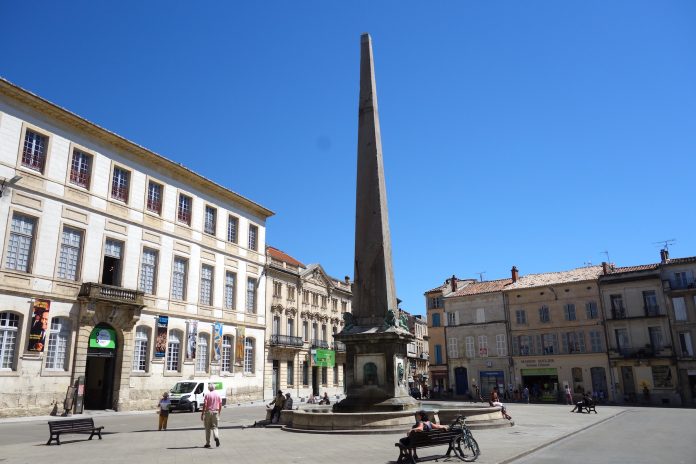 The city of Arles in the south of France, with its dazzling light and easy living, has long had an exceptional relationship with art – and it keeps getting better. Every summer for the past 47 years the Rencontres d’Arles celebrates photography in all its forms. A visit to the festival made for an upbeat and inspirational day. While I am mentioning a few highlights here, I could have easily spent a very happy week strolling around the town and the world-class exhibitions.

“Photographers are explorers” said Sam Stourdz, Director of the Rencontres d’Arles. “Looking for new territories, they bear witness to the world’s vastness, interrogate history and question the medium. They are neither historians nor sociologists, but artists who construct a visual cosmology out of still or moving images, texts or sounds. They take us along on their stories.”

With approximately 40 exhibitions, the festival attracts an international crowd who flock to the event to discover what’s new, pay homage to the classics, and encourage emerging talent – specially poignant this year following the passing of co-founder Michel Tournier who created the event in 1970 together with famed photographer, the late Lucien Clergue, and well-respected curator and historian historian Jean-Maurice Rouquette.

As the saying goes, life is like photography in that we develop from the negatives. In this retrospective of photojournalist Don McCullin’s work, the focus centers on what happens on the battlefields after war ends. Haunting and supremely human.
Venue: Eglise Saint-Anne (Until August 28)

The Street Art of Eamonn Doyle
The Dublin native explores the heart of his city from his own front door. Everyday mundane objects such as a plastic cup and straw, as well as people’s interactions with the streets and each other, are framed into a sensitive visual time-capsule.
Venue:  Espace Van Gogh. Curated by Niall Sweeney

The exhibit Perfect Imperfections: The Art of Embracing Serendipity and Mistakes gathers the work of a group of over a dozen artists that have turned failures and coincidences into hilarious and beautiful pieces, such as Joachim Schmid’s Purple, a montage of the final shots of his dying camera that decided to turn everything into a dreamy monochrome. In a culture obsessed with the perfect selfie, this show is guaranteed to put a smile on your face.
Venue: Palais de l’Archevèché – Curated by Erik Kessels

The visit to the Rencontres d’Arles is not only fascinating for the photography on display, but also to discover the architectural heritage of the city, from 12th-century churches and abbeys, a medieval cloister, and the Archbishop’s Palace, to industrial buildings – including some that are open to the public only during the festival.

The venues are within easy walking distance from each other, which on a smouldering sunny day allowed time for a lazy lunch of Provençal version of chilled gazpacho with the local rosé at an outside table in the Place du Forum, and even a mid-afternoon snack of homemade lavender ice cream… one cannot live on art alone.