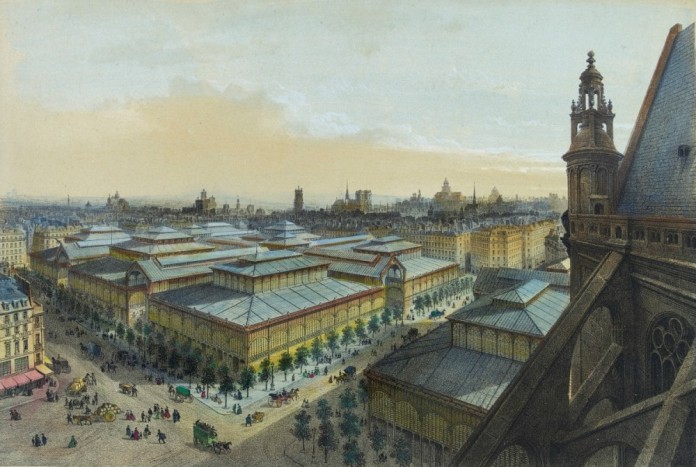 In the annals of Parisian architectural crimes, the August 1971 destruction of the 19th-century iron and glass Baltard pavilions of the legendary Les Halles central food market ranks near the top. Not to mention the string of lackluster-to-tacky developments that replaced them—yet another one underway at the moment.

All have failed to revive the vast site, inspiring one wit to recommend that the nearby Square des Innocents be re-dubbed the Square des Coupables (the guilty). But the protest that followed the demise of Les Halles was instrumental in saving architect Victor Lanoux’s marvelous 19th-century Orsay railway station—also scheduled for demolition and today the Musée d’Orsay. The museum’s current exhibition, Victor Baltard (1805– 1874), Iron and Paintbrush, is the first retrospective dedicated to the pavilions’ architect.

The son of an artist, Baltard was a friend of Ingres and Flandrin, and a talented painter himself. As a Beaux-Arts inspector, he renovated the interiors of the churches of Saint Germain des Prés and Saint Sulpice, reconstructed Paris’s Hôtel de Ville and masterminded such events as Queen Victoria’s Paris visit.

The “Iron” of the title refers to his architectural exploits, from the Saint Augustin church to the La Villette slaughterhouses and the Paris Pompes Funèbres, the city’s casket manufacture. (The latter two are now art centers.) But his 14 pavilions at Les Halles were monumental works of art—the soaring structures were veritable cathedrals of fresh produce, and also atmospheric hives of human endeavor, as celebrated by Emile Zola’s Le Ventre de Paris (The Belly of Paris). They live on in the photos of Eugène Atget, Robert Doisneau and Brassaï, and one has survived intact—dismantled, carted off and reassembled in the eastern suburb of Nogent-sur-Marne, where it is now a cultural center.