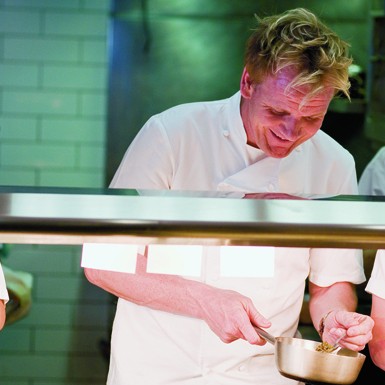 As a food and travel writer, I’m more accustomed to being a critic than a referee, but after the pummeling that three-star London chef Gordon Ramsay has gotten in the French press for his two new restaurants at the Westin Hôtel Trianon Palace, I must step into the ring. Why? Because the contemporary European cooking served up at Gordon Ramsay au Trianon Palace and the brasserie La Véranda is much, much better than the tar-and-feather reviews would have you believe. If I were doling out stars, I’d give him one for his haute cuisine and recommend the brasserie as a perfect place for lunch when visiting Versailles, especially in summer when meals are served in a lovely garden.

Why did Ramsay get such a drubbing? Cocky talk about expecting to get three stars in France just as he had in London played poorly in Paris, as did a lot of crowing about an Englishman taking over Versailles. The service was prissy and flawed for the first month, and many habitués of the hotel’s former three-star restaurant Les Trois Marches were shocked to discover that the new haute restaurant had no garden view. The pretty boutique dining room faces the bar across the corridor, while the new brasserie gets the greenery instead.

The wrong-footed start aside, I very much enjoyed a €150 tasting menu that began with grilled foie gras with white asparagus in a cabernet jus and continued with a disappointing dish—sautéed scallops on rubbery octopus carpaccio—before finding its cruising speed. Roast turbot with coriander pasta and citrus sauce was delicious, as was a tiny, impeccably cooked rack of lamb with Provençal vegetables. Desserts were rather over-the-top and gaudy—metallic foils have no place at the table in my opinion—but overall it was an excellent meal. I predict the French press will eventually come to a revisionist view.

Originally published in the June 2008 issue of France Today