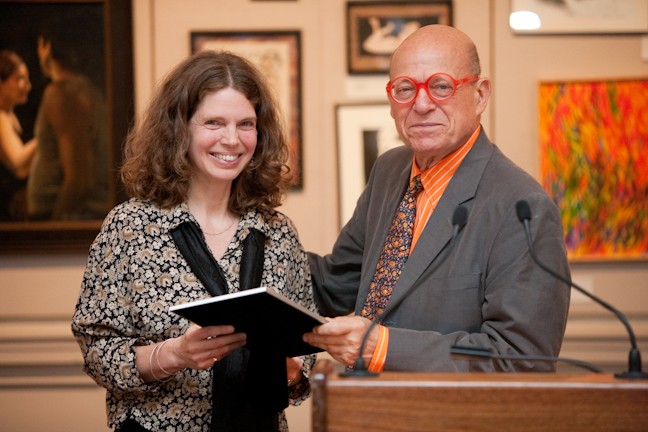 On the evening of May 26th, the French-American Foundation and the Florence Gould Foundation celebrated the art of translation at their 22nd Annual Translation Prizes in Fiction and Nonfiction ceremony, held in the Gallery at the Century Association in Manhattan. Past winners of the prestigious award include Sandra Smith for her translation of Suite Française by Irène Némirovsky and Richard Howard for his translation of The Charterhouse of Parma by Stendhal.

The president of the French-American Foundation, Antoine Treuille, began the awards ceremony by reminding the assembled guests that, since they  were founded in 1986, the Translation Prizes have sought to “enrich the cultural dialogue….give translators more visibility…and promote greater understanding” of French literature in the United States. He also noted the enormous importance of rewarding the publication and promotion of French literature in American publishing. Professor Thomas Bishop, the Florence Gould Professor at New York University and a member of the jury who chooses the prizewinners, followed Mr. Treuille at the podium, and reiterated his colleague’s remarks on the value of translation in this country. Very few foreign works are translated in America, Bishop noted, but nearly half of those few translations are French.

The 2009 prizes were awarded to Jody Gladding and Elizabeth Deshays for their translation of Pierre Michon’s Small Lives (Fiction) and to Matthew Cobb and Malcolm Debevoise for Life Explained, by Michel Morange (Nonfiction). Small Lives was Pierre Michon’s first novel, and won the Prix France Culture when it was first published in France in 1984. Life Explained is an ambitious and exceptional work about the history of life itself, and explores the fields of molecular genetics, evolutionary biology, astrobiology and philosophy. It was originally published in France by Odile Jacob.

Included among the competition’s eleven finalists-five works of nonfiction and six of fiction-were the new translation of Victor Hugo’s Les Misérables, by Julie Rose, the bestselling The Elegance of the Hedgehog by Muriel Barbery, translated by Alison Anderson, and Albert Camus’s Notebooks 1951-1959, translated by Ryan Bloom.

In her acceptance speech, Jody Gladding, a poet and translator who has been a finalist for the prize previously, admitted that Small Lives (Vie minuscules) was the hardest thing she has ever translated. She pointed out that there is no better way to identify with the other than by translation, and that translating Michon’s seminal work forced her to articulate “a sensibility totally alien to [her] own.” It would seem that her articulation of that foreign sensibility was most triumphant.