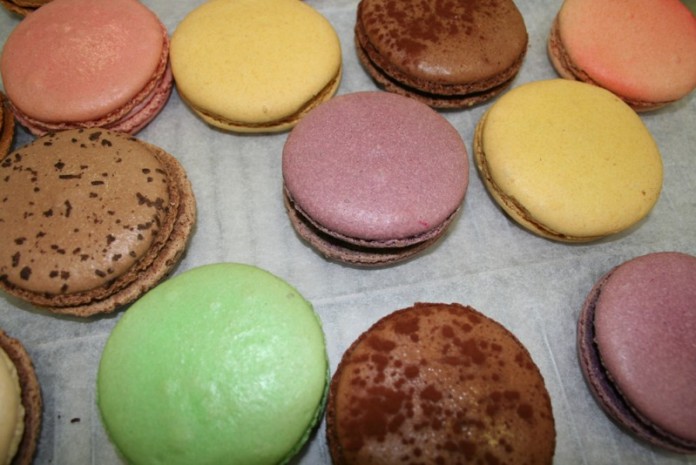 The tender, chewy macaron has been a mainstay of French pastry since Henri II’s queen Catherine de Medici introduced the Florentine delicacy in the mid-16th century. But over the past several years a macaron war has raged in pastry shops throughout the land, and august pâtisseries including Ladurée, Fauchon and Pierre Hermé have taken particular relish in the fray. Pierre Hermé, widely considered the best pastry chef in France, even opened a shop devoted to the little cream-filled almond cookie sandwiches on the rue Cambon in Paris.

The “war” is a sweet one, of course, and every pastry chef in the country, it seems, has taken up the whisk to participate. One day we’ll read in the history books about it, and maybe it will be called the Hundred Years War of the Macaron, for it shows no signs of abating. One of my favorite moments so far was when Ladurée came out with pitch-black licorice macarons. Every magazine cover in the country featured them, I think, and the Ladurée boutiques were mobbed. It was a stroke of brilliance, and it threw me right back to the licorice ice cream from Baskin-Robbins that I loved as a child.

I follow all of this from a certain distance, though, because the macaron isn’t my favorite pastry. I’ve tried to love it, I continue to sample, but mostly I find them too soft and too sweet. Give me a cakey madeleine or a crisp financier any day. Nonetheless, I’m fascinated by the whole affair, because it speaks to the essence of what I love about France and its food: the pursuit of excellence. What might seem absurd in another culture—the quest for the perfect macaron—is completely, utterly normal here.

The macaron war landed in my part of Normandy just short of two years ago, when a tiny little, vivid yellow factory popped up in an industrial park near where I live. Emblazoned on the side is a sign reading Auzou – Macarons. Auzou is a highly prized local chocolatier based in Evreux, with seven boutiques throughout Normandy. Anyone who has visited Rouen, where Auzou has its major shop, has been enticed by the aroma of the company’s chocolates, which taste as good as they smell. Until the factory went up I hadn’t realized they too had joined the macaron war. I decided to investigate.

I met Jean-Marie Auzou right outside his factory. A cheerful, vibrant gentleman, he bustled into the foyer, which has a boutique catering to the locals. I felt a bit as though I’d stepped into Wonderland, because bright, fragrant macarons were everywhere. Some were piled into tall, cone-shaped pièces montées, others were displayed in crisp little boxes, still others were arrayed on plates and trays.

Auzou absently re-arranged everything as he began to tell his story. It began where so many good French food stories do—with his beloved grandmother, Jeanne Auzou. “She took care of us,” he reminisced with a smile, “and if we were well-behaved, she gave us macarons for our afternoon snack. I’ll always remember the flavors of her macarons. What a reward that was way back then!”

Mr. Auzou concedes that it may well have been those rewards that led him to become a pastry chef. He opened his first boutique in 1970, in his native Rouen, but it wasn’t until 1998 that he began making and selling macarons, and even then it was out of sheer nostalgia. “It isn’t a fad with me, like it seems to be for everyone else. I wanted to share those taste memories from my childhood,” he says. “I want my clients to be as happy to eat my macarons as I was to eat those my grandmother used to make.”

After getting to know this humble, dedicated servant of sugar, I believe him, for he goes to enormous lengths to ensure the quality of his macarons. The eggs he uses come from chickens he knows. He eschews California almonds (“They have no flavor,” he says somewhat ruefully) in favor of those from Puglia or southern Spain. These he grinds himself into a delicate flour, and they are the basis of Auzou macarons. He uses no artificial color, opting instead for “natural”, which to him means food-based. His vivid, almost fuchsia pink raspberry macarons, for instance, are colored with poppy leaf extract, and the green of his pistachio macarons comes right from the nut.

We entered Auzou’s cool, airy factory, which even on a gray Norman winter day was suffused with natural light. A handful of white-coated employees, chef’s toques perched on their heads, were bent over their tasks, while a wiry older man hovered over a mid-sized Hobart mixer, watching a blend of egg whites and sugar turn into a bubbly cloud.

“The operative word when you make macarons, aside from quality, is slow,” said Auzou as he peered into the bowl. The froth of egg whites and sugar soon became a firm, snowy mass. Chef William Liebaut, who has worked at Auzou for thirty years, removed the bowl from the mixer, inserted a second, empty bowl, and carefully scraped about two-thirds of the softly beaten egg whites into it. He then turned the mixer to low and slowly poured in more sugar and ground almonds. Within moments the mass was at the “soft point” stage, and judged ready. “We don’t make meringue here,” Auzou said. “The mixture has to be soft. If it gets too hard, we’ll mix in some of that reserved egg white and sugar mixture to soften it.”

This particular batch was deemed perfect. The next stage was flavoring the blend. Mr. Liebaut added some poppy-leaf extract and the white cloud was soon bright pink. “We used to do everything by hand when we started making macarons,” continued Auzou, who by now had replaced his sport coat with a crisp, white chef’s jacket so he could help finish up the sweet batch.

He helped spoon some of the batter into a machine that would automatically squirt just the right amount onto baking sheets covered with parchment paper, five little spurts at a time. “We used to put the macaron batter on a baking sheet by hand. I just bought these machines, and they’ve changed everyone’s life,” he said, looking at Liebaut for confirmation.

“Oh do I remember doing it all by hand,” nodded Liebaut. “This machine is fantastic. We can do about three thousand macarons a day with this.”

Once the macarons were on the baking sheet, Auzou sharply rapped it on the counter, to slightly deflate the batter. “Doing that takes the point away, so the macarons are evenly shaped,” he said. The macarons rest at room temperature for 20 minutes, then they go into a huge oven for a quarter of an hour.

While they’re baking, Liebaut is starting another batch. Chef Gérard Gilbert, Auzou’s chief pastry chef, is bent over a batch of baked macarons, carefully squeezing filling onto one and topping it with another. Gilbert has been with the company for two decades, and his job now is to supervise the macarons at every stage of production. Auzou makes twelve basic flavors of macaron, with several variations on those themes, and it is up to Gilbert to be sure each is perfect.

One long table holds dozens of sunflower-yellow macarons that are being filled with a tart, creamy yellow filling. “It’s lemon curd, we make it all from scratch,” said Auzou with undeniable pride. Nearby another table holds ivory-tinted macarons, which will be graced with a salted caramel filling; there are cocoa dusted macarons here, raspberry macarons there, and on one table the whole assortment is assembled, ready to be boxed and put in the freezer.

The freezer? “We always freeze our macarons,” Auzou says. “They’re better after being frozen for a day or two. In fact, when people buy them from the factory, they buy them frozen. It’s one of our professional secrets.”

The other most important secret to Auzou macarons? The sincerity of Auzou himself. From the quality of the almonds he uses, to the eggs from personal-acquaintance chickens, his goal—like that of his colleagues—is to make the very best. Vivent les pâtissiers de France!

My recipe for macarons is a hybrid, tested many times in my own kitchen. The suggested filling is ganache. You can mix some raspberry jam into the ganache, or flavor it with anything you like, or you can make the filling of your choice from scratch. My filling recipe makes enough for a relatively modest amount—double it if you want more.

The recipe also comes with a caution: macarons are tricky to make. Follow the recipe, do the best you can, and be reassured by a couple of things—even the failures taste good, and pâtissiers like Auzou are always there to bail you out with perfection.

1. Fit a pastry bag with a point that measures about 3/8 inch (1 cm) across. Line 2 or 3 baking sheets with parchment paper.

2. Place confectioner’s sugar and almond flour in mixing bowl, or bowl of an electric mixer, and whisk at lowest speed until the mixture becomes just slightly golden and—when you tip the bowl to the side—leaves no dust on the bowl.

3. Place egg whites and pinch of salt in another large bowl, or bowl of a mixer fitted with a whisk. Add 1 tsp granulated sugar and whisk gently until egg whites are just beginning to be frothy. Slowly add remaining granulated sugar and whisk gently until mixture is frothy and beginning to turn white, about 6 min. Increase speed of mixer, or pick up the pace of whisking by hand, and whisk just enough to “tighten” the whites slightly, no longer than 30 seconds. You don’t want stiff peaks. Start and stop the machine to check the consistency.

9. Bake macarons until they are puffed with a little fringe, 14-16 min. You may need to turn the baking sheet halfway through the baking time, so they bake evenly.

10. While macarons are baking, put heavy cream in a medium-sized saucepan over medium heat and bring to a boil. Remove from heat and stir in chocolate, then whisk until chocolate is melted. Transfer mixture to a bowl to cool.

11. Remove macarons from oven and let them cool on the baking sheets. When cool, carefully remove them from the parchment paper.

12. Whisk filling so it lightens slightly, then put an equal amount on half the macarons. Top with the other half. Voilà!

Get Susan’s recipe for macarons!

Originally published in the March 2010 issue of France Today.