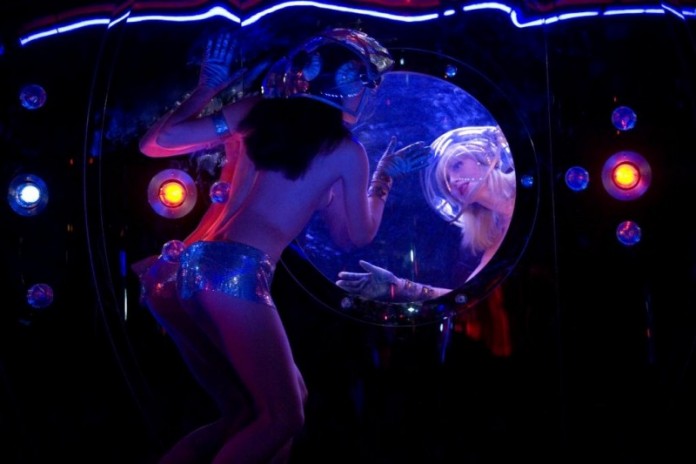 This week, burlesque descends on Printemps, one of Paris’s grandest department stores, where the Crazy Horse Cabaret dancers will perform salacious routines in the windows and strut in a fashion show on the store’s majestic staircase over the next 10 days. It’s a move you wouldn’t expect to see from the American Bloomingdale’s or Macy’s, but which seems right at home in the City of Light. Ooh là là indeed.

Le Crazy Horse de Paris, one of the legendary cabarets of the modern age, first opened its doors in 1951, and has since been a staple of classic Paris burlesque. In recent years, it has benefited from the burlesque renaissance pioneered by entertainers like Dita von Teese, and has staged knockout shows starring the likes of Ms. Von Teese, Carmen Electra, and Pamela Anderson. Now, Crazy Horse dancers will take on the world of fashion in what can only be described as a public tribute to the female form, on display in the Printemps shop windows lining the Boulevard Haussmann.

The windows, which were transformed last holiday season into a winterwear wonderland designed by Karl Lagerfeld, are certainly an ideal arena for the dancing sensations, who are performing their classic Changing of the Guard routine, with traditional Crazy Horse staging and decorations, in the windows on two consecutive Thursday nights, October 22nd and 29th, at 9 pm. For shoppers who simply can’t get enough of the particular Crazy Horse shimmy, the dancers will also be modeling the latest in haute lingerie on the afternoon of Saturday, October 24th, on the main staircase at Printemps de la Beauté.

The dancers are sure to cause a singular, perhaps hypnotic, sensation on the boulevard, one that will most likely lead some shoppers to buy sexy lingerie, and many to buy tickets to the latest cabaret spectacle at Le Crazy Horse.