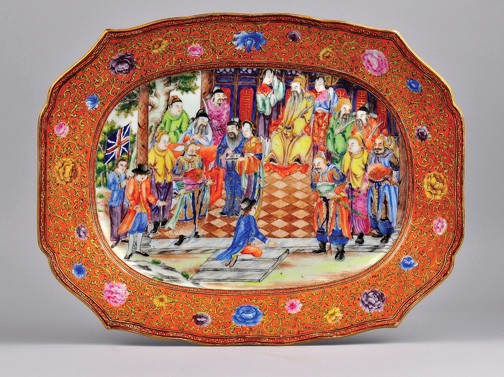 After a gala-dinner evening for dealers and their favored clients, and a second champagne-cocktail preview for the press and various VIPs, the Paris Biennale des Antiquaires opened to the public yesterday at the Grand Palais, in the vast space beneath the spectacular Belle Epoque glass roof.

The 25th edition of the glamorous art & antiques fair has a newly revamped layout and design, with benches surrounding small fountains scattered along the carpeted alleys, making it more streamlined, airier and easier to negotiate than ever—and putting all the focus on the prodigious array of (mostly) museum-quality furnishings and artworks on display.

With more than 80 international antiques dealers and jewelers on hand, the Biennale is far too big and filled with fabulous things to cover all in one go, but a few stands and works stand out at first sight. The Paris gallery Kraemer, a tribute to Franco-American friendship, creates a vision of the White House Oval Office as it might be furnished with the finest of French 18th-century furnishings—with a few modern accents including a small oil painting by Mark Rothko. It’s a lovely room, understated and elegant and, all told, worth a substantial fortune.

Galerie De Jonckheere may win hands down in the Old Master paintings category, with a series of village scenes by Peter Brueghel the Younger. Silver and gold specialist Bernard De Leye of Brussels has precious objects of unbelievable delicacy, including an exquisite silver and enamel inkwell and clock in the form of a sailing ship, and a tiny jewel-studded horse and rider that might be the most covetable small object at the fair—unless that’s the rare octagonal porcelain platter depicting the arrival of British Lord McCartney at the court of Emperor Qianlong in 1793,  at Galerie Antoine Lebel of Brussels. And the paneled-library stand of the rare book gallery Librairie Thomas-Scheler and dealers Bernard and Stéphane Clavreuil is a gem in itself.

In Asian arts, it’s hard to beat Gisele Croës—true to her reputation, the top Brussels dealer has an entire stand full of ancient Asian statues and objects of breathtaking beauty. Running Croës a close second is J.J. Lally of New York, at the Biennale for the first time, whose most striking treasure is a two-foot-tall Tang Dynasty pottery figure of a braying camel and its jubilant bearded foreign rider.