Home Archives The Good, the Bad and the Really Monstrous 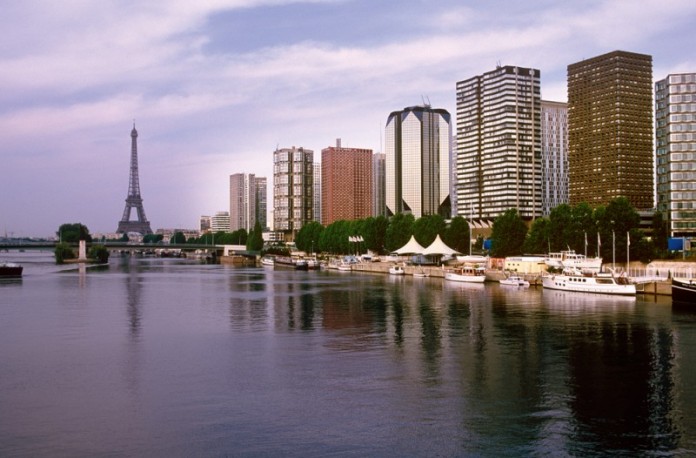 When it comes to contemporary architecture, is Paris doomed? After all, this is the city that erected the Tour Montparnasse, one of Europe’s most monstrous structures, and the Opéra Bastille, a beached whale of a building so badly constructed that it required a hairnet to prevent pieces of the facade from falling onto passersby.

Is it something in the air? The City of Light may be the City of Blight when it comes to contemporary structures. The last truly exceptional-and highly controversial-building, the Pompidou Center, designed by Renzo Piano and Richard Rogers, was built 30 years ago. Philosopher Jean Attali, who teaches at the school of architecture Paris-Malaquais, even claims that the International Olympic Committee’s decision to award the 2012 games to London was influenced by Paris’s bad architecture. “It’s a symptom of the city’s lack of vision,” says Attali, “the symptom of a shrunken vision of its urban landscape.” Many Parisians were hoping that the summer Olympics would trigger an architectural renewal, similar to what’s happened in Beijing for the past three years. Paris Mayor Bertrand Delanoë complains: “There’s no reason why the kind of modern architecture we admire in other cities could not find a place in Paris,” pointing out Norman Foster’s controversial Swiss Re tower in London (known as “the gherkin”) or Jean Nouvel’s similarly-shaped Torre Agbar, in Barcelona.

But Delanoë is, at the very least, disingenuous. Each time he could have exerted some political muscle on the subject, he retreated. Consider the Les Halles debacle. When in 2004 Delanoë announced an architectural competition for the total renovation of that sunken shopping mall and its surroundings-one of the worst architectural disasters of the Pompidou-Chirac 1970s era-some 100,000 Parisians turned out to view an exhibit of the projects submitted by various architects-a huge number of visitors for an architectural competition. Expectations ran high, especially since among the competitors were Jean Nouvel and Rem Koolhaas, leaders of the new class of “starchitects” responsible for renowned buildings all over the world. “For the first time in many years, here was a project that really captured the interest of Parisians,” says Attali. “But instead of capitalizing on this level of enthusiasm, the city chose the least ambitious proposal.” (The winner was a project by David Mangin and Saura Architects, that was in fact only half-adopted-the garden half; nothing has been decided about the other half.)

Says Clarisse Labro, a young Yale-trained French architect, “Most of the time, when there is a plan to build something new, French officials are afraid of controversy and protest. It is due, in part, to an abysmal lack of architectural awareness.” François de Mazières, who heads the newly opened Cité de l’Architecture et du Patrimoine in the Palais de Chaillot at Place du Trocadéro, admits he is always surprised by the general lack of knowledge about architecture in France. “People can name great writers or musicians, but they are unable to name one great architect, with the possible exception of Mansart or Le Corbusier.” And despite their claims to love architecture, elected officials do nothing to help ambitious projects. Case in point: when billionaire François Pinault announced his intention to build his huge modern art foundation, designed by Japanese architect Tadao Ando, in suburban Boulogne-Billancourt, he encountered so much bureaucratic red tape that he finally moved his collection to Venice (where the city offered him the magnificent Palazzo Grassi). Pinault feared that he would be long gone before groundwork for the foundation here would have started.

And after Delanoë mused about changing the city’s laws prohibiting any building higher than 37 meters (121 ft, less than 11 floors), he retreated as soon as opposition became mildly vocal. Good and innovative architecture requires political courage, which is a rare commodity. The Pompidou Center faced enormous popular and political opposition, and yet President Valéry Giscard d’Estaing greenlighted its construction.

So what’s wrong now? Disneyland Paris has the Haunted House, where visitors travel in small carts through a landscape of monsters and ghosts, and Paris has its Trail of Horrors. Let’s take a tour. Just as for some of the more dangerous rides, visitors should be warned: it’s not recommended for the faint of heart or for those who love the city. The trail of monumental errors starts with a visit to Chinatown, at the southern edge of town near the Porte d’Ivry. The high-rise complex called Les Olympiades would not be out of place among the housing projects of the former Soviet block. It continues, toward the Seine, with Jussieu University’s 1970 Tour Zamansky, home of the faculty of science, which competes with Notre Dame in the distance for the Paris skyline, but also is in the middle of a 10-year renovation project because it’s a mother lode of asbestos. Along the Seine and its Voie Express Rive Gauche, the expressway on the banks of the Seine that President Pompidou wanted to expand, the trail leads to the soulless high-rise cluster of Front de Seine, which might be more accurately called l’Affront de Seine. Skip Les Halles-most Parisians wish they could-and walk towards charming Belleville, where the few remaining houses are oppressed by the concrete towers that have destroyed huge chunks of the neighborhood.

The elegant 16th arrondissement has not been spared either. Walk around the Fondation Le Corbusier, between Auteuil and Passy. The lovely quarter, where many artists still had ateliers until the early 1960’s, has been ruined by nondescript modern buildings-proof that money does not buy taste.

Critics of the Paris skyline are not crying over Haussman architecture, one of the city’s great riches, but over what might have been-how the current generation could have brought its contribution to the rich history of the capital. Philosopher Alain de Botton, author of The Architecture of Happiness, a wonderful new book analyzing how good and bad architecture affects our life, says, “It’s not a question of returning to the past. Rather, the whole challenge today is to understand what made our cities beautiful and to adapt those rules.”

The destruction of entire neighborhoods, especially in the 13th and 19th arrondissements, in the 1970’s so traumatized Parisians that there is strong resistance to any attempt to build anything bold or new or unusual. Good French architects like Christian de Portzamparc, Jean Nouvel or Paul Andreu have recently been working outside of France. Paris is running the risk of become ossified, a museum to the past.

But there might be hope on the horizon. On September 17, after the inauguration of the Cité de l’Architecture, President Nicolas Sarkozy invited some of the world’s most renowned architects for lunch at the Elysée Palace. Among his guests were Nouvel, Zaha Hadid, Rem Koolhaas, Frank Gehry and Massimiliano Fuksas. “There is no change which is not symbolized by ambitious architecture,” said Sarkozy. “I would like to see an architectural renaissance in France. If we were trying to build Versailles today, it would be impossible because of bureaucratic red tape.”

While Paris is debating and still fighting old wars, La Défense, the suburban business district west of the city, which saw its first skyscraper in 1964, is going through a complete renovation, and finally surprising architecture critics. If you want to see interesting architecture, just take a look at what’s happening in La Défense. It just might be that the best new building in Paris will soon be there, the spectacular 300-meter (984 ft) Unibail tower. Its architect? Thom Mayne. An American. Bien sûr.

Originally published in the April 2008 Paris issue of France Today.

What are your favorite and least favorite buildings in Paris? Tell us in the comments below!