Home Archives Straying off the Art Path on the Riviera 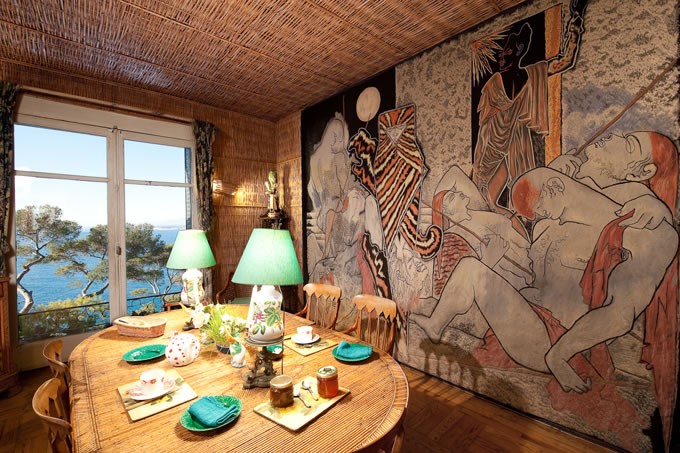 Driving through the Mougins area recently, a friend pointed out Picasso’s house and studio now renovated as a private residence. My friend had managed to see it before it had sold and remembered seeing the paint splats on the floor of the atelier. We both agreed that this seemed somehow more thrilling than visiting a Picasso gallery. It represented a tangible connection to the artist’s life.

It is perhaps all too easy when you live on the Côte d’Azur to be blasé about art and the great 20th century artists. Outside of Paris, the French Riviera is home probably to the greatest number of art museums in France, including Matisse, Picasso, Chagall and Renoir. I often fall into a routine of making the rounds. From the Musée Matisse in Nice to the Picasso Museum in Antibes, it can feel like going through the motions. If this sounds like I have a bad case of art ennui, then I probably do. After five years of living on the Côte, I am spoilt.

So the thrill for me now is to find the off-the-beaten-track art. Surprisingly it does exist, although it is almost never in a gallery. Instead, it is more likely to turn up in chapels, as murals on public buildings or in once private residences as ‘domestic’ art. Nothing illustrates this better than Jean Cocteau, the legendary bohemian writer, designer and artist.

La Villa Santo-Sospir in St-Jean-Cap-Ferrat is a genuine ‘turn up’. Not that many people seem to know about it. The villa was the summer home of socialite Francine Weisweiller. The summer of 1950 saw Jean Cocteau take up residence and stay on and off for over a decade. Cocteau embellished (or tattooed, as it has been described) its walls with his distinctive surreal murals, covered the ceilings with frescoes and tiled the entranceway. He also went a bit wild and painted the furniture. Whether he was the house guest from hell or heaven is debatable, but Mme Weisweiller was delighted.

Although open to the public, visits to the villa are by appointment only and seem to be about as easy to come by as entry to the Palais d’Elysée. Several people have told me to ‘turn up and hope there is a visit.’ From experience, this technique works erratically, but it adds to the elusive nature of this villa. No doubt Cocteau’s vanity would have enjoyed the dedication required in order to see his work.

If this whets your appetite for Cocteau, then a trip to Menton is essential. Whereas most people will head to the recently opened Cocteau Museum (with good reason as it is magnificent), the afficionados will take a detour to the Salle des Mariages (the registry office inside the Hôtel de Ville). Between 1957-58 the mayor of Menton allowed Cocteau to let loose his imagination with swirling, colourful murals and fanciful furniture design. It is a glimpse into the mind of the artist at work rather than behind glass.

Then there is the Chapelle Saint Pierre in the seaside village of Villefranche-sur-Mer. Under Cocteau’s eye the chapel was restored and decorated in his flamboyant style.

These art surprises on the Côte thankfully take me from feeling jaded to exhilarated. Which leads me to the next left-field art fix I am trying to arrange – a visit to the cabanon (beach house) of Le Corbusier at Roquebrune-Cap-Martin. Now, if only the contact would pick up the phone. I feel another ‘turn up’ moment coming on.