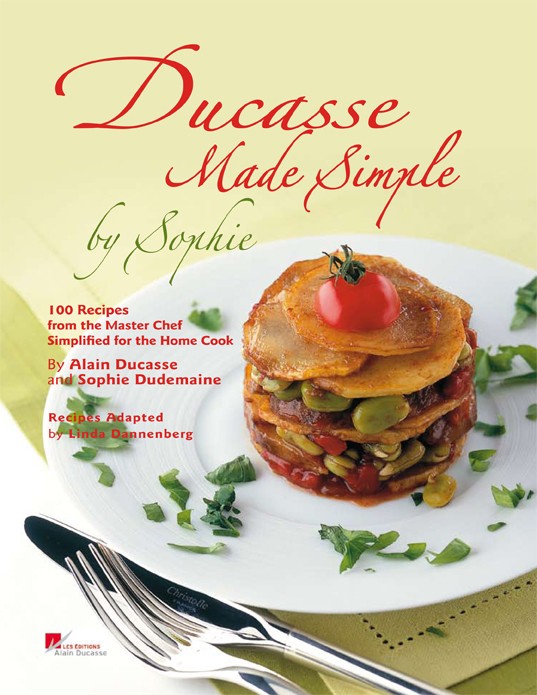 Sitting in the gloriously colorful kitchen of her Normandy home, where she runs a cooking school, boutique, table d’hôtes and bed-and-breakfast, Sophie Dudemaine explains her mission: “I’m Zorro of the kitchen,” she chuckles, “or Zorette”. Author of 17 best-selling cookbooks, she rides to the rescue of harried home cooks, showing them how to fix quick, simple everyday meals without sacrificing quality, taste or creativity. Sophie, 43 this month, pioneered the “Easy Cooking” trend in France ten years ago and remains one of its most popular advocates.

Last year, among myriad activities, she starred in a Saturday morning culinary-reality series on French TV, , which parachuted her into people’s homes to deal with cuisine crises. Episode after episode, her cheery coaching restored hope to tormented souls who, because they were losers in the kitchen, found friends shunning invitations, family turning up noses at microwaved disasters. In her warm, direct and buoyant style, domestic goddess Sophie dispensed home-saving recipes, shortcuts and decorating tips.

Success, and psychodrama, guaranteed. “There were powerful moments. People cried,” says Sophie passionately. “I’m lucky to be in a position to help others. Preparing food is an art de vivre and a way of giving and receiving love. I want people to succeed, even if modern lifestyles limit the time and effort they can devote to cooking. I give them basic recipes that they can elaborate on and make their own, and it builds up their confidence.” Sophie also takes the Gallic guilt out of using ready-made ingredients and labor-saving gadgets, even testing brands to find the ones that really work.

The same empowering principles, on a grander scale, are behind the book that Sophie-everyone calls her by her first name-is launching this month in the United States: Ducasse Made Simple by Sophie ($35, Editions Alain Ducasse). It contains 120 impress-your-guests recipes by the renowned chef with 14 Michelin stars and 20 restaurants. The dishes are taken from his encyclopedic Grand Livre de Cuisine, a massive and daunting tome that weighs five kilos (11 lb.) and calls for ingredients like calf’s foot jelly and cockscombs.

Sophie’s version is more user-friendly-and no cockscombs-but equally elegant. Structured like a menu for entertaining with appetizers, meat and poultry, vegetables and desserts, it offers such sophisticated treats as Scallop Salad, Herbed-Duck Ravioli, Sea Bass in Herb Butter with Chanterelles, Garlic-Roasted Cornish Game Hens with Cherry Sauce, Roasted Lamb Shanks with Citrus Crust, and Chocolate-Nut Tartlets with Caramel Sauce. With the help of American culinary writer Linda Dannenberg, recipes weren’t just translated but adapted to American tastes and ingredients. “We cut out rabbit and organ meats and used more turkey, for example,” says Sophie. She’s eagerly anticipating the New York book with Ducasse, and expanding her horizons with American projects, including a TV series along the lines of Allô Sophie. And she’s polishing her already fluent English: “Have to get ready in case I meet Oprah!”

Published in France in 2005, Sophie’s Ducasse-for-beginners book grew, as all her projects do, out of a “dream” she had late one night, in 2003. “I thought, I must call Alain Ducasse and tell him his recipes are too difficult for the average person, and that he should let me simplify them” she recalls. “But I didn’t know him at all.” Fate barged in six months later. Two weekend guests at her bed-and-breakfast-La Maison de Sophie-turned out to be key Ducasse employees, who agreed to be her emissaries.

“Two days later, I got a call,” she remembers. ” ‘Bonjour, this is Alain Ducasse, what do you want from me?’ That put me on the spot. What could I say? ‘Monsieur, your recipes are no good, too elitist, nobody can follow them except professionals?’ I managed to explain that I wanted to try making them more accessible. He immediately told me to send him sample recipes.” Impressed by her rendition of Sole Petit Bateau and Velouté d’Asperges, Ducasse gave her carte blanche to continue, and the help of his chefs for testing. And he compliments her on the inside cover for “conserving the spirit of my cuisine and making it accessible to all, with her usual talent.”

Culinary flair runs in Sophie’s Parisian family. Her grandfather ran the restaurants at the Eiffel Tower (including the one that became the Jules Verne, recently taken over by Ducasse). Her father was a founder of the Drugstore Publicis chain. “Everybody in the family cooked,” she says. But later, when Sophie, age 19-having dabbled in modeling and theater-tried to pass exams to become a chef, her inability to follow classic recipes to the letter stood in the way. “I was always putting in ‘the Sophie touch’ to things like Boeuf Bourguignon and the judges didn’t like it,” she explains.

Instead, the “Sophie touch”, aka “Sophie attitude”, took her on a less traveled path. Thanks to her father’s connections, she did apprenticeships with several prestigious chefs, including Jean-Pierre Vigato and Henri Faugeron. At 21 she launched a catering business, going to fashionable people’s homes and preparing meals the hostess could then take credit for. That occupation ended when she fell in love with her husband Jacky, 17 years ago: “In fact, though, we first met when I was four, and he was a maître d’hôtel at one of my father’s restaurants, and then we met again 20 years later.” While Jacky was working long hours managing two trendy Paris restaurants, Sophie was in the suburbs (“Rather like Desperate Housewives,” she says), taking care of their daughter Ambre, now 11, and indulging in her favorite hobby: “I love shopping. I love shoes.” Jacky came home one day, as she tells it, waving the credit card bill, and decreed it was time for Sophie to go back to work.

The idea she came up with-“And people laughed at me”-was to bake “cakes”-best translated as loaves, but basically variations on the traditional English fruitcake-in different flavors, sweet and savory, in her own kitchen and to sell them at the local market on weekends: “Something tasty and convivial that people could say they made themselves.” Soon, “The whole neighborhood smelled like cake. I saw cakes everywhere.” To make a culinary saga short, her home-based business boomed, until she was selling 1500 cakes a week, produced by a local baker under her guidance. Then in 1999 came an offer to write a book of cake recipes. And voilà, Les Cakes de Sophie has sold more than 2 million copies since 2000 and been translated into six languages (available in the U.S. as Sophie’s Sweet and Savory Loaves).

That first book-followed by an ongoing series covering crêpes, buffets, jams, barbecue, meatloaves-incorporated the “Sophie touch”, which means clear and foolproof recipes, a choice of alternative ingredients, helpful hints on utensils…and the author’s phone number, in case the reader runs into problems.

“Why shouldn’t people call me?” says Sophie, who also answers innumerable letters and e-mail messages with the help of two assistants. “It’s an interactive process. I find out what works for people and what they want. My next book is on soups, because that’s what my readers keep asking for.” On the SOS front, she had two calls recently, both from men, complaining her salmon loaf was coming out too soft to cut: “Turns out both of them had baked it covered with aluminum foil. I never said to do that! Is it because men like using foil, I wonder?”

Five years ago, Sophie and her family moved to the house in Normandy, a former presbytery dating back to the French Revolution in an idyllic pastoral setting. Sophie’s refuge is also her laboratory, where she tests recipes on family and guests and tries out the gadgets – like a handy tomato peeler-she sells in her boutique. La Maison de Sophie is an abundant universe in Sophie’s earth-mother image, complete with her initials in pink on the front gates-and anyone allergic to pets or kitsch, beware. About 100 animals-Sophie adores animals-live in harmony on the estate, including three dogs, four cats, horses, goats, wallabies, alpacas, parrots and flocks of exotic fowl, Sophie’s beloved hens among them. Although many, like Chipolata the pig, are named after foodstuffs, none of them are intended for the table; and the whole menagerie gets to roam free on weekends. Guests get rooms with names reflecting their thematic decor (“Deauville”, “Zanzibar”) and unrestricted access to DVDs and aperitif tray. A bulletin board displays photos of Sophie and Jacky elaborately costumed as Scarlett and Rhett from Gone with the Wind for their 1999 wedding. And instead of cuckoos, two clocks harbor a horse and a cow that trundle out noisily to mark the hour.

“It’s all part of the same philosophy,” sums up Sophie about her house and her projects. “What I do is for pleasure, not business. I’m happy in my life, and I want to spread that happiness in an often cruel world. My husband is my agent, and he cries when I turn down offers to put my name on things-he cries a lot, with me! But he understands. People trust me, so I can only endorse what I really believe in.” And she serves up more fresh coffee from her Nespresso machine and yet another generous slice of her luscious orange cake.

Originally published in the October 2008 issue of France Today