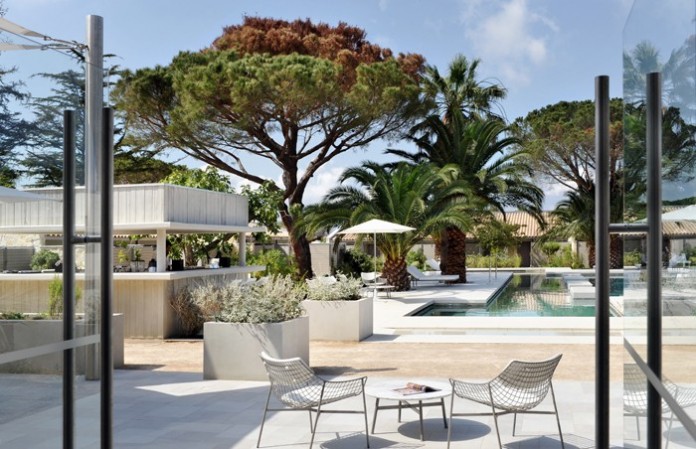 Near the sandy beach called La Plage des Salins, the new boutique Hôtel Sezz offers urban sophistication in a seaside setting. The resort complex built by designer Christophe Pillet and architect Jean-Jacques Ory, was dreamed up by owner Shahé Kalaidjian as a bon chic bon genre, fun-in-the-sun version of the elegant Hôtel Sezz (for seizième, or 16th, arrondissement) in Paris. Guests are greeted by their own “personal assistant” and offered a welcome drink in the lobby before being whisked away to one of the 37 airy, ultracontemporary grey-and-white rooms, suites and villas. The Sezz look is minimalist, with clean uncluttered lines, from the pretty poolside with a lively Dom Pérignon champagne bar (hey, it is Saint-Tropez) to the Payot spa, which offers, among other choices, a purifying green-coffee facial and massages with grapefruit or spicy cocoa-and-orange essential oils. The Paris-meets-Saint-Tropez effect continues in the restaurant—named Colette in homage to the writer, who once lived nearby—with a small but inviting menu created by the three-star chef Pierre Gagnaire. The constantly changing dishes include some original combos, like a starter of eggplant puréed with tomatoes, cucumber and raspberries, as well as lobster fricassee with basil, and the Colette dessert—a peach, apricot and fresh almond parfait. If you’re awake at sunrise, or not off sipping cocktails on a yacht at sunset, you can also take advantage of the yoga classes in the hotel’s garden.

Originally published in the September 2010 issue of France Today; updated in April 2011