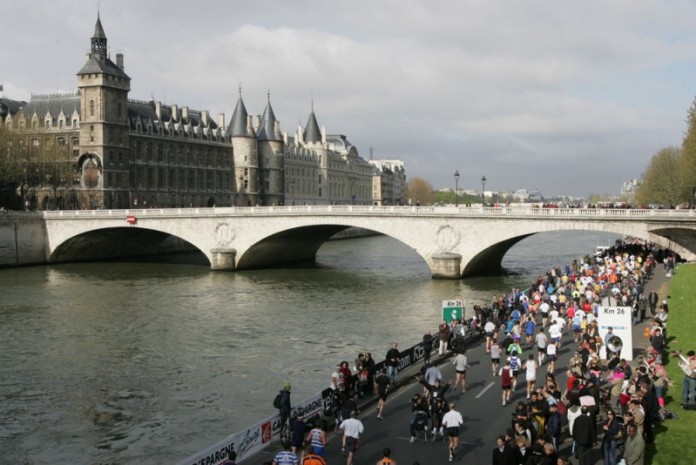 There is, perhaps, a section of French society that will never be reconciled to President Sarkozy’s jogging. Long before he collapsed while running in the grounds of the Château de Versailles this summer critics had urged him to stop.

It began shortly after he took office. Left-wing newspaper Libération noted that it was totalitarian regimes that tended to cultivate physical fitness, while French philosopher Alain Finkielkraut demanded the president abandon his “undignified” pastime. Why not, he suggested, take up walking instead? “Western civilization, in its best sense, was born with the promenade,” he observed.

But the president didn’t listen then, and he hasn’t listened since. Ignoring newspaper editorials recommending that he slow down, he vowed to continue jogging, and when he went to New York in September for the UN summit on climate change, he was found pounding the pavements and paths of Madison Avenue and Central Park.

But he’s hardly alone en France. In fact, despite critics’ suggestions that le jogging (or now more popularly le running) is too “American”, Sarkozy is in good company. Look back in history, for instance, and it was a Frenchman who gave us the competitive marathon: Michel Bréal’s suggestion to the organizers of the first modern Olympics, in 1896 in Greece, that a marathon should be added to the program to commemorate the original run of Pheidippides from Marathon to Athens in 490 BC, was enthusiastically taken up. And a Frenchman, Albin Lermusiaux, was one of only four foreign runners to take part — alongside more than a dozen Greeks.

That early enthusiasm for running might have dimmed somewhat in the intervening years (in 1977 the inaugural Paris Marathon saw just 87 finishers) but jogging took off in the 1980s and continues to enjoy widespread popularity. And while France might more often be associated with cycling, principally because of the Tour de France, running is significantly more popular.

“It’s a way of life for many French people,” says Bruno Lacroix, editor-in-chief of the French running magazine Jogging International. Between eight and ten million French people say they run, and the country is believed to have more than 5,000 races each year — the most in Europe.

The best known of these is the Paris Marathon, held annually in April. It might not match New York, London or Berlin in attracting the big names in running, but more than 35,000 people participate each year, and it’s a big pull for foreign visitors, who account for more than 30 percent of the total. This year more than 700 Americans took part.

It’s easy to see why, because for a visitor, Paris arguably beats even the top races. Those might all be nice courses, but they’re focused primarily on securing world records, explains Thom Gilligan, president and founder of Boston-based travel company Marathon Tours and Travel. That means keeping the course flat and fast, not necessarily packing in all the great sights. “It’s about priorities,” he says.

Paris, though, couldn’t really fit in any more. Starting right in front of the Arc de Triomphe, and continuing down the Champs-Elysées, the course checks off Notre Dame cathedral, Place de la Bastille and the Eiffel Tower. You also get to run through both the woods, the Bois de Boulogne on the west and the Bois de Vincennes to the east of the city (as well as along the château there). There’s a good stretch alongside the River Seine as well and the finish loops back to the Arc.

“The beauty of it is that you really hit all the landmarks in Paris,” says Mark Offenberger, a French-American national living in Trémery, in the Lorraine region. He started running a couple of years ago to get back in shape and got hooked. “It really is a stunning route,” he says. And for all that, it’s not slow either; this year, Kenyan Vincent Kipruto finished in 2h 5m 47s, just outside the top ten fastest finishes for any marathon ever recorded.

This approach is fairly typical of French races, whose organizers know how to make the most of their surroundings. The Marathon des Alpes-Maritimes, held this month, attracted some 30,000 spectators and more than 10,000 participants in its maiden run last year, all keen to join the crowd charging down the Promenade des Anglais. The secret? A beautiful course following the Mediterranean seacoast for almost the entire 26 miles between two of the most popular tourist centers in the country — Nice and Cannes. There are plenty of other scenic winners, too: La Rochelle, Marseille, Reims, Nantes, Toulouse all have their own marathons, and races of various distance can be found all over the country. “In almost any area on any given weekend you can find a race,” says Offenberger.

Nevertheless, some races stand out. Sometimes that’s because they remind runners of something serious. Le Marathon de la Liberté, for instance, passes through the 17 towns and villages lining the beaches targeted by Allied forces during the Normandy landings. More often the significance is less profound.

After Paris, for example, probably the best-known event is the Marathon du Médoc in September. If the Paris Marathon is the event that most appeals to serious runners, Médoc is the exact opposite, says Gilligan: “It’s strictly for fun.”

According to the organizers, the event is founded on four pillars: health, sport, conviviality and fun. In truth, however, that’s probably in reverse order. Yes, it’s a full-length marathon, officially measured, and there is a fairly respectable course record. However, 90 percent of the runners come in costume — this year’s theme was the circus. Participants are known to stash bicycles in the hedgerows to help them make the finish line; and, in all honesty, how healthy can it be to run over 26 miles while drinking wine at more than 20 pit stops and sampling the oysters, steak, cheese and foie gras on offer? Celebrations before the event, wine and food during it, and a huge ball and fireworks afterward ensure that few steam ahead on a course that meanders through more than 50 châteaux, including many of the big names in French wine.

It’s a fine French concept that has been picked up elsewhere. June’s Marathon du Vignoble in Alsace, the Marathon de Provence Luberon in October, and La Champenoise, a half-marathon in May through the Champagne region, all take a similar approach. None, though, has really caught the imagination in the same way as Médoc. As one review puts it, the event is “one of the world’s great parties with a marathon thrown in for good measure”.

The Ultra-trail du Mont-Blanc, on the other hand, is a marathon with about three more marathons thrown in. Starting from Chamonix, the course takes runners over 103 miles of Alpine terrain, through three different countries and more than 30,000 feet of altitude changes. This August, 2,300 people lined up at the start; fewer than 1,400 finished. Even the winners take over 20 hours.

So why do it? Two reasons, says Seattle’s Krissy Moehl, who finished first among the women this year: the challenge and the stunning scenery. “It’s a very tough race, but also very pretty. High Alpine tracks, a beautiful course, long, long climbs and great views — you’re definitely rewarded for the effort you put in.”

The race also well illustrates another two characteristics of French running. The first is the rise of “trail running” — effectively off-road racing. There are now as many as 1,000 such races in the country, and if France is not quite in the premier league when it comes to its marathons it’s the leader in Europe when it comes to trails, says Benoît Laval, who has run for France in the sport’s world championships and is the founder and owner of Raidlight, which makes equipment for it.

According to Laval, trail running often attracts runners bored by chasing personal bests, who want to run for pleasure in mountains and forests, as well as enjoying the social aspects of the sport. Such runs also tend to be about testing your limits, since many trail races involve extremely long distances: another of Laval’s favorites is Le Défi de l’Oisans — again in the Alps, but even longer than the Mont Blanc Ultra at 124 miles (200 km).

That shouldn’t be a surprise, because the second characteristic is that if the French know how to have fun with their racing, they also like a challenge. It’s probably no coincidence that the Marathon des Sables, generally acknowledged as the toughest foot race on earth, was conceived by a Frenchman. Patrick Bauer, a former concert promoter from Troyes, created the race after he walked alone across the Algerian Sahara in 1984. Now each year, runners from around the world come to do the same for the 151-mile six-day race. Compulsory equipment includes an emergency distress flare, an anti-venom pump for scorpion and snake bites, 2,500 calories of food per day and salt tablets.

Back in France, the challenges are a little more manageable, but sometimes no less imaginative. On the Marathon des Sables, for instance, runners are disqualified if they’re overtaken by two camels that walk the course; in the Marathon de l’Epine or the five-mile Foulées du Gois, both on Noirmoutier Island, you have to outrun the sea. If you’re not over the causeway that connects it to the mainland at Beauvoir-sur-Mer before the tide comes in, you’re out. And you get wet feet. Often, though, the challenges just mean long races or very big hills, whether in the Alps or in Corsica, which hosts the Trail Napoléon, a 14-mile race climbing more than 3,000 feet.

Fortunately, there are many events that offer shorter, easier races, and whatever distance you do, there’s no reason not to take it gently. As Gilligan points out, if you’re after a fast time, you’re better off staying closer to home, so you can sleep in your own bed and not risk the jet lag. If, on the other hand, you’re going to travel all that way for a race, it’s a shame not to take in the scenery. And the fun.

Book early: Many races put a limit on numbers — just 8,500 in the case of Médoc, from 15,000 applications. That means they can fill up fast. For Paris, you need to book six months in advance to be safe, and, even if there isn’t a limit, booking early is often cheaper.

Visit the doctor: To take part in any race in France you’ll need a letter from the doctor saying you’re fit to race; a lot of the big races have a form you can download from the website and get your doctor to sign. Other than that, though, racing in France is surprisingly bureaucracy-free. “You just need shoes, big eyes and a smile,” says Emmanuel Faivre at www.wanarun.net — a good site for race details if you speak French.

Try something smaller: Some less well known races offer just as much for tourists as the big events, says Renato Losio, who writes for www.runabroad.com, which lists some of the best runs around the world. He recommends La Course du Trophée, for instance. It’s a brilliantly organized run in the beautiful Parc Naturel de la Grande Corniche, above Monaco. Smaller races can also often mean cheaper airline tickets and accommodation costs.

Originally published in the November 2009 issue of France Today.