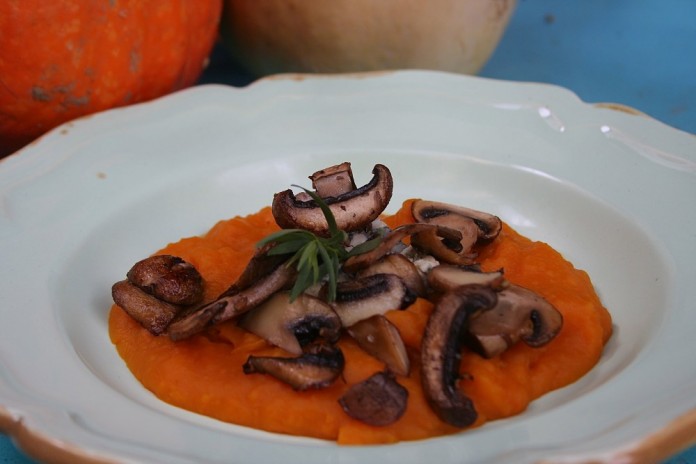 “Boot-air-noot, c’est bon le boot-air-noot,” was a cry I heard as I entered my local market last fall. I followed it to my favorite farmer, Baptiste Bourdon, and found him holding a small butternut squash in his meaty hand, singing its praises to customers near and far.

Seeing that narrow, pale-skinned vegetable—which, like all squash, is actually a fruit—was thrilling, like running across a great old friend when least expected. With its arrival, I felt a little piece of my culinary world fall into place. Any expatriate cook will understand—we love the differences between our adopted country and our native land, but there are always little things missing. For me, one of those little things was flavorful squash.

Not that squash isn’t available in France, it is. The general word for is it courge (plural courges). Come fall, there are generally three kinds that appear at the market. The Rouge Vif d’Etampes (the vivid red of Etampes) is a large, flame-orange variety that is usually sold by the slice. The same goes for the Musquée de Provence, a big, crenelated, green-skinned variety. Both are simply gorgeous, and I love watching market growers with their saberlike knives hack portions off, then carefully wrap them for customers. There is something elemental about it; something that suggests partnership. A client says he or she will cook for six; the grower eyes the large squash and thwacks off a piece that will, theoretically, be just the right size.

I’ve been part of this partnership, but it has always fallen apart in the kitchen. No matter how hard I try, how much I season, how much I pretend, these two particular squash don’t excite my taste buds. I’m willing to call them subtle, and to say that they do make a gorgeous soup. But without a big bunch of leeks, some garlic and onions, a touch of coconut milk and maybe some really hot pepper, they’re simply bland.

Rouge Vif and Musquée de Provence are the most traditional varieties of squash in France, more typically found in the southern regions than those of the north. In the south, as early as the mid-18th century, squash was referred to as pompion and noted as a thickener for soups and stews. This is an excellent role for both of these big, beautiful squash—they have subtle flavor that highlights other flavors. They’re perfect supporting characters.

They also make decent desserts, though the water has to be cooked out of them. I have a favorite recipe from southern France that combines almond powder and pureed squash, and it can be absolutely sublime.

The third common variety of squash on the French market is the potimarron, also called kuri or Hokkaido squash, and it’s a native of Japan. Small and tear-shaped, vivid orange, firm and heavy, it is the polar opposite of its big showy cousins. Its flavor is reminiscent of chestnuts; its texture is firm and starchy. It transforms into a brilliant purée, is perfect when cooked with a bit of star anise as its only seasoning, and makes a gorgeous and unusual side dish when sautéed with fresh herbs. While its flesh is less subtle than the other, larger varieties, it’s a joy to cook and an even greater joy to eat.

And now the butternut has come on the scene in France, a lovely addition to the vegetables of winter. Thin skinned, its flesh is slightly sweet, slightly rich, slightly buttery. It has all the delicacy of the two big guns mentioned above, and all the character of the potimarron, turned down a couple of notches so it’s elegant and refined. I was so happy to have it appear on the scene, and I’m not alone. Since that fateful “boot-air-noot” moment, the squash has taken hold.

Accompanying the advent of the butternut is another familiar squash, at least to Americans, called spaghetti squash. Completely insipid, it’s well loved for its novel texture because, once cooked, its flesh offers long strings that resemble spaghetti. What makes a spaghetti squash palatable and even delicious is the tomato—or other—sauce that is poured over it. You’ll never convince anyone it’s spaghetti, but it’s fun to serve now and then.

While squash is mentioned in Greek texts, it is thought now that those references were to melons, because squash originated in Central and South America. Archaeological sites in Ecuador have revealed squash seeds that date to more than 12,000 years ago, but they didn’t make it to Europe until about the 1500s.

Native American tribes depended on squash, which they dried for use year-round. Puritans quickly learned the value of squash, and Spaniards were the first to bring squash seeds back to Europe, apparently using them to feed their pigs. From there it is thought the squash made its way to southern France.

Preparing squash is simple. For those that tend to be watery and mild, roasting is a good option. To roast, preheat the oven to 400° F. It isn’t necessary to peel the squash. I remove the seeds, though, scraping out all the fiber that holds them. Place them face down on a baking sheet and roast until they are tender through. Then scrape the flesh from the skin and proceed with whatever recipe you are using, or serve as is, heartily seasoned.

For squash with character, like potimarron and butternut, steaming or boiling are both great ways to cook them, although roasting is an option too. A potimarron has thin skin that can be tough to remove, so I recommend cooking it with the skin on, then removing the skin once it is cooked. It is also a tough nut to crack—use a cleaver, and tell everyone to stand back! Butternut is easier to get into. It slices easily. Its skin is thin, too, and responds to cooking just like the potimarron.

These two squash are my favorites. I cook and serve them often from September on, all through the winter. They offer color, so welcome on the autumn and winter table, as well as sweet, nutty flavor.

This dish can be served as either a first course or a main course. Depending on which, it will serve six to ten.

1. Wash the squash. Cut it in half and discard the seeds (or reserve them for another use), removing the stringy fibers. Cut the halves into 1/2-inch cubes and put them in a large saucepan. Add chicken stock, star anise and salt. Bring to a boil over medium-high heat. Reduce heat so mixture simmers, cover, and cook until squash is tender, about 30 min.

2. While squash cooks, heat olive oil in a small skillet over medium heat. When hot, add mushrooms and stir or shake the pan. Season mushrooms with salt and pepper and cook, stirring and shaking often, until they are golden and tender—about 5 min. Remove from heat.

3. When squash is cooked, remove star anise and purée the mixture, then pass it through a sieve to remove the skin. Return purée to saucepan. Adjust seasoning. If the purée is very dry, stir in a bit of hot water to make it smooth.

4. Mince tarragon and stir it into the mushrooms.

5. To serve, heat the purée until it’s steaming. Divide it into individual bowls. Top each serving with a slice of Roquefort, then top that with the mushrooms. Garnish with a sprig of tarragon and serve immediately.