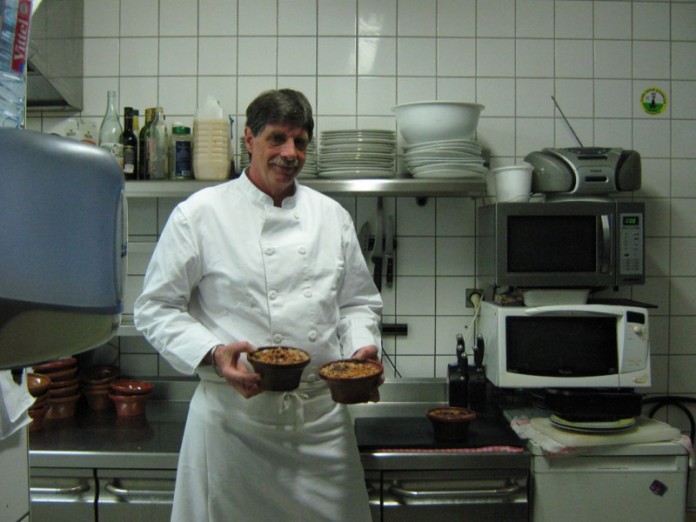 In France, cuisine de terroir refers to the culinary savoir-faire and the traditional dishes that emerged from its various regions through the centuries. Its continued existence reflects a laudable Gallic résistance to global trends toward the mass production and standardization of food. While many such regional specialties have fallen out of fashion, perhaps no classic French dish has fared as well, attained such iconic status and attracted such passionate connoisseurs as the simple casserole of beans, meat and herbs from southwestern France called cassoulet.

Indeed, cassoulet is the stuff of legend. As the story goes, it dates back to the 14th-century siege of Castelnaudary during the Hundred Years’ War. With the city surrounded, desperate citizen soldiers are said to have gathered their remaining provisions to create a communal dish robust enough to power their counterattack and send their invaders packing. The battle was in fact lost, but cassoulet went on to become part and parcel of the Southwest’s Occitan identity—the langue d’oc was spoken throughout the southwest, except in the Basque and Catalan regions.

Cassoulet’s name is thought to come from cassole (caçóla in Occitan), a wide and deep glazed earthenware cooking dish, supposedly invented by a 14th-century Italian potter working in Issel near Castelnaudary. It was strong enough to withstand the blazing temperatures of local bakers’ ovens, where the hearty concoction—originally called an estofat or estouffade, as in stew—was cooked.

Early versions of the dish usually used dried fava beans; the slender white haricots lingot, or white kidney beans, traditionally used today first arrived from South America in the 16th century. It’s said that Catherine de Medici’s brother gave her a bag of them as a wedding present when she married the French crown prince who later became Henri II. Among her many titles after the wedding was Countess of Lauragais, a region southeast of Toulouse, where she encouraged cultivation of the lingot. Even today some claim that Lauragais lingots are the best. But then there are the fat white beans of Tarbes, 100 miles west of Toulouse….

In fact, so entwined did the dish become with the region that several cities eventually laid claim to the one “true” recipe. Chef Prosper Montagné, author of the first Larousse Gastronomique, tried to quell the feud in 1928 with his Le Festin Occitan—the sacred text of cassoulet lovers—in which he first described his gastronomic “holy trinity”: “Cassoulet is the God of Occitan cuisine,” he wrote. “A god in three persons: God the father is that of Castelnaudary, God the Son that of Carcassonne, and the Holy Spirit that of Toulouse.”

Today, few chefs have taken to heart Montagné’s writings or disseminated cassoulet lore around the world more than Carcassonne chef Jean-Claude Rodriguez. Founder of the Académie Universelle du Cassoulet, Rodriguez has spread the teachings of Montagné from Quebec to Tokyo, and brought together in conciliatory spirit cassoulet lovers from erstwhile quarreling towns across the Languedoc. For while Rodriguez appreciates the Castelnaudary legend, he says the real history of cassoulet began not on battlefields but around humble hearths. “The truth is,” he says, “our modern cuisine de terroir is anchored in family traditions and the savoir faire of peasants.”

Cassoulet, Rodriguez explains, emerged from its rural roots in the19th century as part of a wider movement of young women leaving their farms to work in bourgeois city homes. Employed as servants and cooks, their archetypical peasant dish was imported into bourgeois cuisine, where it was enriched with choice regional meats—mutton in the pastoral region around Toulouse, duck or goose confit around poultry farming Castelnaudary and the partridge as found roosting in vineyards around Carcassonne.

So, says Rodriguez, those who claim there is but one true cassoulet have a limited view of history. To help gourmets discover the dish in all its guises, the Academy created the Route des Cassoulets, which links restaurants whose chefs share something more essential than a recipe. “They are mindful that they are the spiritual heirs of those who made cassoulet a century ago,” he says. “Because a cassoulet made with respect—and love—will always be good.”

Philippe Puel, chef at the elegant restaurant Le Cantou in Saint-Martin-du-Touch, a suburb of Toulouse, may spend his days catering to dignitaries and Airbus executives, but when he prepares a cassoulet it’s always with the image of his grandmother bent over her farmhouse fireplace in mind. “For her a cassoulet was a two day affair,” Puel recalls. As for the dish that finally emerged from the embers, “it was extraordinary,” he says. “We don’t know how to make them like that anymore.” Yet Puel admits he isn’t exactly trying, either. “A cassoulet in the end is a pretty heavy dish,” he says. “Today our society has changed, our nutritional needs have changed, and our tastes are changing as well. We must be able to lighten this ancient cuisine, otherwise these dishes are quickly forgotten.”

For Puel, cuisine de terroir can only survive by walking a fine line, trying to “subtly adapt these dishes while conserving as much as possible their true character.” Mutton has long been gone from the region’s cassoulet, but Puel nonetheless adds fresh Toulouse sausage as tradition there demands, while using a lighter, sweeter bean than customary, which he finds in nearby Tarbes. Traditional pork rind is sliced so fine it’s nearly invisible, his duck confit is trimmed of fat, and he somehow manages to serve a dish that’s only lightly browned after several hours in the oven. It may not be his grandmother’s cassoulet, but Puel says it meets an essential requirement of 21st-century cuisine: “It is important to be able to finish a cassoulet, and know you won’t be ineluctably driven to nap afterwards.”

Trying to minimize the cassoulet’s soporific qualities is the last of chef Alain van Ees Beeck’s worries. He’s more preoccupied with preserving his city’s celebrated culinary reputation. After all, Castelnaudary, as a roadside sign proclaims, is the “Capitale Mondiale du Cassoulet”. It’s the principal stop on the Route des Cassoulets between Toulouse and Carcassonne, and in 1979 the city’s culinary professionals founded their own Grande Confrérie (Brotherhood) to protect the authenticity of their cassoulet, awarding a seal of approval to deserving restaurants.

Unfortunately, the 120 tons or so of it that’s produced there every day is now factory-canned, and not always quite the stuff of legend. So unlike Puel, Van Ees Beeck—whose ancestral Dutch name seems at odds with his southern soul and lilting accent—prizes the traditional black crust that forms on his cassoulet as proof of the laborious, time-consuming recipe he respects.

Van Ees Beeck’s efforts are clearly appreciated by local residents and tourists alike who dine elbow to elbow in his lively restaurant, Au Petit Gazouillis. His cassoulet is slow-cooked with ham hock to bring a rich, smoky taste to his creamy Lauragais beans, to which he adds peppery Montagne Noire sausage and Castelnaudary’s famous confit of farm-raised duck. Van Ees Beeck says the end result is a goût de terroir that can’t be come by in a can.

Van Ees Beeck’s dish comes close to perfection for Academy founder Rodriguez, although he takes issue with the particular earthenware cassoles in which Van Ees Beeck bakes his cassoulet. But that’s the quarrel of a chef who modeled his own handmade cassoles after an 1850 woodblock print. Indeed, at his restaurant Le Château Saint Martin Trencavel, 15 minutes from Montagné’s birthplace in Carcassonne, Rodriguez applies to the letter the writings of Montagné to recreate the sacred dish à l’ancienne: his white haricot beans are from Mazères, a village in the Ariège whose light sandy soil Montagné revered; the aged ham, pork rind, pig’s foot and knuckle meat he adds all recall cassoulet’s origins as a humble peasant ragout. And during hunting season, for those who request le veritable cassoulet de Carcassonne, Rodriguez uses wild partridge in lieu of duck confit.

Rodriguez also notes that there’s a final, elusive quality to an authentic cassoulet that a chef won’t find in any recipe, a moment that accompanies the long-anticipated arrival of a cassoulet, still bubbling, at a packed table. “Something magical happens in this moment,” he says. “I’ve served people who can’t seem to relax, they’re uptight, they’re nervous, but when the cassoulet arrives, all that melts away. It’s instantaneous—that, sir, is magic. I cannot explain it, but make a choucroute garnie and it’s not the same thing.”

Maybe that je ne sais quoi inherent in the gathering of friends around the cassole explains why cassoulet has yet to go the way of coq au vin and other once-celebrated dishes of the cuisine de terroir. “Many dishes that were once the fundamentals of French cuisine are practically forgotten today,” says Rodriguez. “But cassoulet lives on, because it requires patience, respect, and it requires a lot of love.” And the occasional nap.

Originally published in the May 2009 issue of France Today.