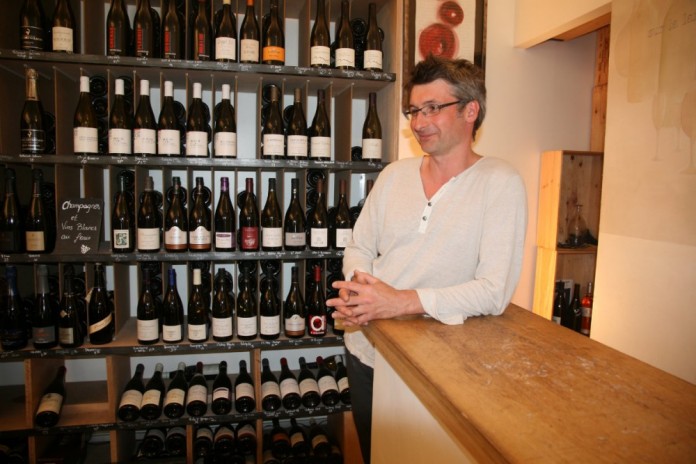 The sun rises above the Église Sainte-Anne, its domes, almost Byzantine in style, glinting in the light. Up the hill, a cyclist hops off his Vélib’ bike in front of the newspaper rack at Le Longchamps. He pauses to kiss a friend on both cheeks as she leaves the boulangerie with a baguette tucked under her arm. Beneath a row of street lanterns, a dog sniffs his way down a cobblestoned lane. Sucking on a cigarette, a waitress surveys the sidewalk tables in front of a bistro. A retired duo, savouring every minute of their retraite, install themselves at Le Diamant for their morning ritual of café and conversation. The scent of burnt espresso trickles out the door. Wait, is that a rooster crowing?

Bienvenue to the Butte-aux-Cailles. With such a mellow mood, and lack of car traffic, you’d be forgiven for thinking you’d found yourself in an ancient village in la France Profonde. But there’s a distinct urbane air, and political vibe, to this hamlet. One clue is the street art, with witticisms coined by celebrated artist Miss.Tic, who first rose to fame in this quartier in the 1980s. “Be happy while waiting for happiness,” one of her stenciled heroines proclaims. Like sassy pin-ups, these mademoiselles painted on restaurant walls and store facades spout poetic slogans, often with a smoking gun in hand. “You make me dream… to better fall asleep,” another says. These sexy silhouettes confront gender stereotypes and entertain passers-by with political double-entendres: “Il y a de la rage dans l’ére.” (My personal favourite: “Je cherche la vérité, et un appartement.”)

Southwest of Place d’Italie in the 13th arrondissement, the Butte-aux-Cailles is a closely guarded secret among locals, who prize the neighbourhood as the last remaining village in paris. The main artery, following the crest of the hill, is the Rue de la Butte-aux-Cailles, which is surrounded by a tangle of alleyways lined with vine-clad houses. From the Métro Corvisart, there is a set of stairs ascending into the Butte, almost hidden underneath a towering apartment building. From the small park at the top, you can see the glowing façade of newspaper Le Monde’s headquarters.

You won’t find any chain stores here, only restaurants and boutiques that are one-of-a-kind in Paris. Les Abeilles, for example, is the only store to provide equipment (like veiled hats, gloves and hive hardware) to the beekeepers in Paris, and owner Jean-Jacques Schakmundès is a proud apiculteur, with beehives across the city. The shelves are stocked with beeswax candles and varieties of honey from around the world, but the real treasure is the local miel harvested right in the 13th arrondissement. Likewise, Les Bijoux de Nico is unique in the French capital; it’s the only store to sell genuine Touareg jewellery sourced from artisans in Niger. And the restaurants, packed every night, are both popular and populaire. Chez Gladines on Rue des Cinq Diamants is renowned throughout the 20 arrondissements of Paris for its Basque platters priced for a song.

Historically situated outside the Paris city limits, the hilltop village was once dotted with windmills. The Butte takes its name from a certain Monsieur Pierre Caille, who bought this vineyard-cloaked terrain in 1543. Some historians also point out that the Butte’s pastures were inhabited by lots of quails (hence Butte-aux- Cailles is plural). Beneath the hill flowed the La Bièvre, a tributary of the Seine which was polluted by tanners, laundries and butchers, its reeking stench later covered over with a pavement in the 19th Century. (Today there is a movement to resurrect La Bièvre, and a stretch of it has been opened in the suburb of Gentilly.) The neighbourhood’s pool, a historic landmark built in red brick in Art Nouveau style, was once filled with spring water, naturally heated to 82 degrees Fahrenheit. Just outside, folks still flock to the large fountain to fill up their water bottles with purified spring water.

In 1783, the Butte witnessed the world’s “first human flight” when Jean-François Pilâtre de Rozier successfully piloted a hot-air balloon from the Bois de Boulogne, five and a half miles away, and landed victoriously on the Butte. A sadder occasion was the tragedy of 1871. The Butte was a political stronghold for La Commune de Paris, the short- lived socialist government. The deadly Bataille de la Butte-aux-Cailles, when insurrectionists were gunned down by “Versailles” forces, is immortalised in a painting hanging in the Orsay Museum. Left-leaning sentiments remain in this former working-class bastion, now a haven for artists, musicians, and hipsters. The restaurant Le Temps des Cerises is a cooperative, with shares owned by the employees, and ‘happy hour’ pints are reasonably priced at bar Sputnik.

The Butte’s fascinating history is celebrated in Paris-Mythique, one of the best boutiques in the city for original Paris-themed gifts. You’ll find small, solar-powered windmills (a nod to the Butte’s past), along with beautiful books on the local street artists (in homage to the quartier’s present day). Owner Jean- François is a wealth of information about the neighbourhood, and will happily entertain curious visitors with anecdotes. The store walls are adorned with paintings by his mother, the artist Jani Massiat, who captures charming village scenes.

Indeed, art is the lifeblood of this busy and vibrant quarter. Lézarts de la Bièvre, the local artist association, is a play on words; the lizard symbol is the signature painted next to the oeuvres found on walls and facades, the neighbourhood itself serving as the blank canvas. Many artists have ateliers here, and during the annual “Portes Ouvertes” of Lézarts de la Bièvre, lucky visitors can get a peek inside the studios. Some of the most interesting can be found in “Little Russia” on Rue Barrault, which flanks the Butte. A steep outside staircase leads to a terrace, perched high above the rooftops. Landscaped with potted plants, the terrace is in fact shared by all the apartments that span its length. The first has a hand-painted sign noting “concierge” and you can actually walk between the apartments. “Little Russia” gazes  across to “Little Alsace,” which is an ensemble of 40 houses built around a central courtyard garden on Rue Daviel. Designed in an Alsatian style with sloping roofs and blue timbered facades, Little Alsace – built in 1912 – is a marvellous example of some of the city’s earliest public housing. Today these houses – along with the stand-alone maisons in the adjacent lane – represent some seriously coveted Paris real estate.

Dusk finds the Butte-aux-Cailles at its most vibrant and alive. As the sun sinks below the village, Paris’s pearly white light makes shadows on the walls, illuminating the street art by Jef Aérosol, Seth, and Miss.Tic. Villagers pause for an apéritif and the mood is downright festive, no matter what day of the week. Bars like La Folie en Tête – where musical instruments serve as the décor – and Le Merle Moqueur – with dozens of different varieties of rum available – attract a lively student crowd. In front of the cafés, the coveted sidewalk tables are already full. At L’OisiveThé, the weekly knitting group gathers for a cup of tea and a scone surrounded by masses of colourful yarns representing the full range of Pantone shades. Near the pool, the small playground is still full of giddy young children who rush to play on the slide a few more times before the night watchmen comes around to lock the gate. Vive the village!

Brimming with delightful Paris-themed treasures, this postage-stamp-sized shop doubles as the Butte’s syndicat d’initiative (tourist information office). Here you can find books about popular artist and poet Miss.Tic, who also lives in the neighbourhood, and learn a thing or two about the quartier from the lovely owner Jean-François.

As the city’s specialist on Touareg jewellery and a proponent of fair trade, Nicolas Morele d’Arleux sources his collection directly from artisans in Niger. Each piece is hand-made and styled with tribal motifs. Other unique items include ancient Murano glass trading beads, vintage watches transformed into earrings, and heirloom silver forks bent into bracelets.

Behind the façade, beautifully painted with butterflies and birds, Aimée’s cozy tea salon also sells yarn in every colour of the rainbow. A weekly knitting and crochet group gathers for scones, cake and fine teas in the evenings. In typically playful French fashion, the café’s name is a pun with the words thé (“tea”) and l’oisivethé (“idleness”).

Urban beekeepers are taking Paris by storm. Far from the pesticides of the countryside, the bees of Paris prosper. Visitors can taste the fruit of the bees’ labour at this boutique, where Jean-Jacques, a passionate apiculteur, sells hundreds of honey varieties. You can even bring your own container to refill from large vats of acacia and chestnut honey.

This popular brasserie serves up delicious and hearty specialties from the Aveyron region, like sausage and aligot (a dish traditionally made from melted cheese, cream, garlic and mashed potatoes). Chic paintings of cows hang above tables topped with red-checked cloths, and the day’s specialities are scrawled on an old- fashioned chalkboard.

Established since Mitterrand’s election in 1981, this excellent independent wine shop has a truly diverse treasure trove of natural and biodynamic wines to choose from. With a network of vigneron suppliers across France, Fabien, the caviste, is more than happy to dish out friendly advice on the perfect accompaniment to your meal.