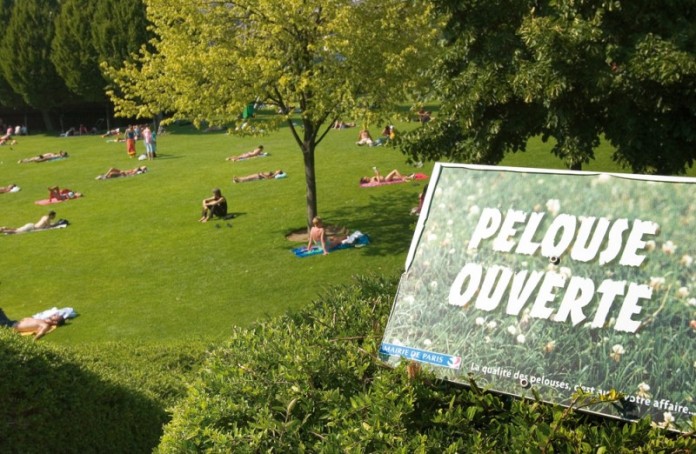 The other day, while soaking up the breathtaking view over the Parc Montsouris from the vantage point of my balcony, I noticed a bunch of friends settled on the lawn enjoying a Manet-style picnic. Notorious Paris weather permitting, the picnic alternative to restaurants and cafés has caught on everywhere lately, reflecting a slight shift from Parisian café life to the outdoors, a trend that points to an environmentally conscious age, a back-to-nature craving and possibly a financial pinch. Some picnic fans even carry their own tables and chairs down to the quays of the Seine or the banks of the Canal Saint Martin.

As picnic sites, Paris also offers scores of squares and gardens, of all shapes and sizes. From the world-renowned Tuileries and the Jardin du Luxembourg to the secret pocket-handkerchief patch of greenery adjoining the late President François Mitterrand’s home on Rue de Bièvre, from the hilly, countrified Parc des Buttes Chaumont to the stylish enclave of the Palais Royal-wherever you happen to have spent your morning, you are bound to find a garden near at hand to enjoy a fresh-air escape from the city’s traffic-polluted streets.

At the top of the scale, the Jardin du Luxembourg is the most famous of all Left Bank gardens. Bordered by the Latin Quarter, Saint Germain des Prés and Montparnasse, it has been celebrated by a plethora of writers, French and foreign, including Ernest Hemingway, who first met Gertrude Stein here during a stroll. William Faulkner makes it the final scene in his 1931 novel Sanctuary. It’s the city’s second oldest garden, preceded only by the Tuileries, laid out in the early 17th century for Marie de Medici, Henri IV’s Florentine widow and resident of the adjoining Luxembourg Palace. The original garden was designed in the Italian fashion, sprinkled with grottoes and fountains. The only one of those to survive, the Medici Fountain, was restored and shifted to its present location when the garden was remodeled under Napoleon III. The romantic statue that now graces the grotto, Polyphemus Surprising Acis and Galatea, is the work of sculptor Auguste Ottin. This shady, romantic nook, where Sartre and Simone de Beauvoir had their first rendezvous, is also the garden’s coolest spot—some say the coolest spot in Paris—ideal for a picnic on a hot day.

If you are in a gregarious mood and crave the sun, head for the circle of chairs around the central pool, occupied by generations of sun worshippers, watched over from the top of their pedestals by dozens of past queens and other heroines of France, also arranged in a neat circle. For a more secluded experience, try the English-style section of the garden, on the Rue Guynemer side, where an immaculate rolling lawn is graced with the statue of a majestic stag. Or, if you want to literally déjeuner sur l’herbe instead of sitting in a chair, there are three long grassy plots on the Rue Auguste Comte side of the garden with signs that indicate where “It is permitted to sit on the grass”.

For the Luxembourg, get your picnic at Gérard Mulot, a bakery and pastry shop conveniently located not far from the Luxembourg Palace, on the Rue de Seine. Gérard Mulot has been going strong since 1975, when he bought a little neighborhood boulangerie. Since then he has grown into one of Saint Germain’s gourmet institutions, with a window display of dazzling cakes and pastries that stops passersby in their tracks. Inside there’s a wide choice of salads, pies, aspics, and take-away cooked dishes, not to mention the mouth-watering pastries, sherbets and fresh fruit salads—the choice is overwhelming, though not inexpensive. If macarons are much in vogue at present, in fact Mulot was already making them back in the 1970s, and you can add a couple to your picnic as an extra treat.

Or try Hédonie, an upmarket gourmet grocery near the church of Saint Sulpice. You’ll find an array of salads, quiches, Provençal tarts, fresh fruits and vegetables, juices, half-bottles of red and white wine and even champagne—all of it absolutely “bio“. The very sympathique staff will heat and uncork for you, and provide plastic utensils.

The Jardin des Plantes, which lies on the eastern fringe of the Latin Quarter, also dates from the first half of the 17th century. It was commissioned by Louis XIII as a garden of medicinal plants and has maintained its scientific vocation ever since. Other than its botanical section, it also houses a menagerie founded in the early 19th century, a Museum of Natural History with a stunning Grand Galerie de l’Evolution—a Noah’s Ark parade of animals—and greenhouses with tropical, Mediterranean, Australian and Mexican vegetation, which served as models for the naive jungles painted by Le Douanier Rousseau.

The vast formal esplanade à la française runs down to the Seine, with its rectangular lawns, neat flower borders and symmetric rows of plane trees on either side. Those seeking a real return to nature will make their way to the gorgeous and lesser known Alpine garden boasting 2,000 species of flowers, some imported from the Himalayas. Those craving some shade can continue to the steep mound situated near the corner of Rues Geoffroy-Saint-Hilaire and Cuvier. Planted with age-old trees from across the seas, it has a challenging labyrinth climbing to its top. You might be encouraged by the fact that Marie Antoinette also climbed it, when she came to visit the famous scientist, naturalist, mathematician, author and intendant of the garden, the Comte de Buffon. You’ll enjoy your picnic all the more after the effort.

The nearby Délices de Daubenton, at 35 rue Daubenton, will provide you with goodies for your picnic. Its unassuming, old-fashioned shop window is laden with them, and with an air of bygone days. Philippe Raynaud will make you feel at home right away, advising you on his different foodstuffs, carefully selected among producers from all over France, not least the gourmet southwest. Try his terrine de canard au zeste d’orange, or the terrine gourmet Henri IV, from a recipe that was much appreciated by the foodie king at the turn of the 17th century. A jar of foie gras accompanied by onion jam or summer truffles will complete the treat. Let Philippe guide you through his Graves-de-Vayres wines, a small Bordeaux variety, or pick a bottle of violet or mimosa syrup to liven up your mineral water. Finish off with an organic ice cream—lime with vodka, raspberry with basil, or peach with jasmine. Of course, you might have to eat that first, before it melts.

Le Square Récamier—recently renamed Square Roger Stéphane despite residents’ opposition to the change—is a secret oasis a few steps from the busy junction of Rue de Sèvres and Boulevard Raspail. Situated at the dead-end of tiny Rue Récamier, it goes unnoticed by the crowds of shoppers, although it’s been there since 1933. In the 19th century this was still the site of the Abbaye aux Bois, the retreat of the celebrated Madame de Récamier. She was visited here daily by her friend and neighbor, writer François-René de Chateaubriand, who resided on Rue du Bac. Despite its small dimensions, the garden square boasts a fountain and a cascading pool, a rocky mound and an impressive variety of trees and flowers, superb rhododendron, Japanese lilac, magnolia and honeysuckle, filling the air with sweet scents.

Buy your picnic at La Grande Epicerie, the gigantic food hall of the Bon Marché department store, the Left Bank gourmet emporium where every edible product under the sun seems to be available. There are several counters of take-away dishes from all corners of the world, and disposable paper cups and plastic cutlery are provided.

There is a touch of the miraculous at the Jardin du Bassin de l’Arsenal—a silent strip of fragrant rose bowers stretching along a maritime canal, just below the noise and fumes of the busy, buzzing Place de la Bastille. You wonder how this is possible as you make your way in, from Boulevard de la Bastille, down the cobbled steps toward the water. The Arsenal basin was created in the early 19th century to link the Canal Saint Martin and the Seine, serving as a merchandise port. In the 1980s, when the regeneration plan for eastern Paris was underway, the Place de la Bastille became the city’s new trendy hub and the port was converted into a pleasure-boat marina. The construction of the Bastille Opera House, the major element in the plan, received huge media coverage, although more important for the environment and the local residents was the creation of new gardens in this once-derelict section of Paris. The basin and the garden are named for the Royal Arsenal, which was situated on the banks of what was once an arm of the Seine. The Duc de Sully, the Grand Master of the Arsenal at the time of Henri IV, made it his residence, and it was when the king was on his way to visit Sully, on May 14, 1610, that the religious zealot François Ravaillac jumped onto the royal coach and stabbed him to death.

For a feast here you can buy your provisions at the Boulangerie Saint-Antoine, in Rue Saint Antoine just west of the Place de La Bastille. This neighborhood boulangerie has great crunchy baguettes and homemade dishes and salads, as well as homemade desserts, all ready packed.

La Promenade Plantée, a short walk from the Place de la Bastille, is probably the city’s most imaginative garden: an abandoned red-brick railway viaduct has been beautifully restored, its street-level arches converted into artisans’ workshops, and its elevated tracks replaced with a 4.5-kilometer (2.8-mile) garden promenade. Strollers, joggers and cyclists can traverse the elevated garden all the way to the Bois de Vincennes. The planting is no less imaginative, offering delightful variety as you go along. Sunbathers flock to the vast lawn of the Jardin de Reuilly, romantics can wander off to a secluded pergola of roses, those who love Provence can enjoy a touch of it on the banks of the little canal, in summer bursting with lavender.

A gourmet picnic is guaranteed if you shop at Rouge, Blanc et Bulles and Gourmet Gourmand, on a quiet side street near the Gare de Lyon. These two independent shops—a wine merchant and a gourmet grocery—work together. Rémi Chambouvet trained with Robuchon, among others, and really knows food. His sunny disposition matches the Mediterranean products he sells, garnered from Spain, Italy, Greece and southern France. Everything is fresh, authentic and delicious, as acknowledged by his appreciative clientele of connoisseurs. His Spanish pata negra ham is divine, as is his Italian prosciutto, and the cheeses have all been matured to perfection. Vegetarians can go for grilled Mediterranean veggies such as eggplant, zucchini, mushrooms and artichokes, but if you are celebrating something special, why not try the plateau privilège, which comes with foie gras and other delicacies from southwest France? Then go next door for your wine—why not a bottle of Veuve Clicquot? You can buy it in an attractive isothermal case with two champagne glasses that will come in handy for future picnic celebrations.

Originally published in the September 2009 issue of France Today