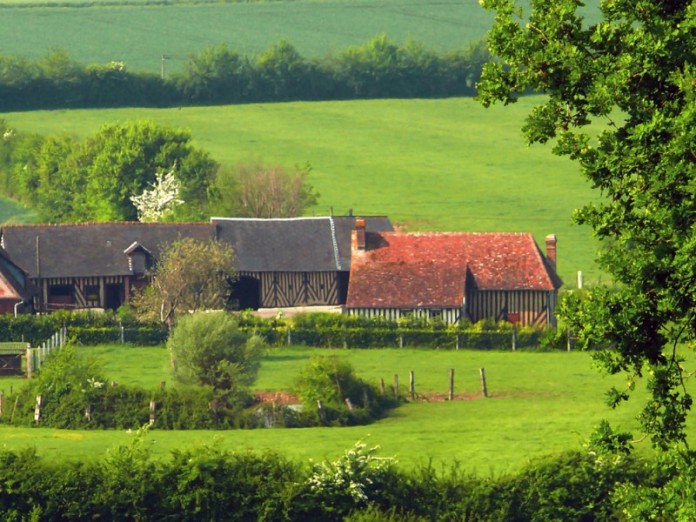 There can’t be many Americans who are not familiar with the windswept expanse of beaches that cling to the Normandy coastline. The Allied landings on D-Day, June 6, 1944, placed Utah, Omaha, Gold, Juno and Sword beaches in the annals of Western history, and images of the pristine military cemeteries are forever etched in modern memory.

Just a short ferry journey across the Channel from England, Normandy has long been popular with Britons looking for second homes or a complete life change. But according to real estate agent Chris Slade, from A House in Normandy, the area is also attracting a good deal of interest from clients from other parts of the world including the US, Canada, Australia, the Middle East and—Kazakhstan!

Normandy is divided into five official départements—Eure and Seine-Maritime in Upper Normandy; and Calvados, Orne, and Manche sharing Lower Normandy and the thin crescent of territory that includes Caen and Alençon, known as the Pays d’Auge.

“Most of the houses we sell are in Lower Normandy, directly under the Cherbourg Peninsula,” says Slade. “The property here is about one-half to one-third of what it would cost in the UK, and the outgoing expenses are so much less. Here, you pay around €400 for community charges, which is considerably less that in Britain.”

“Everything about Normandy is a breath of fresh air,” adds Slade, who bought his own property in France ten years ago. “We can’t recommend it highly enough. It has a good climate, it has a great road network with no road tax, and there’s a great warmth here from the Normans towards the Allies, due to the Second World War.”

“The Normans don’t see themselves as French, and when I moved into my hamlet my neighbor made us laugh because he said we could be worse, we could be French.”

While property prices in Calvados are slightly higher than those in other areas of Lower Normandy, they still represent great value. “You can still pick up a renovation project for between €75,000 and €125,000, but it really does depend on the location. We go from zero to top whack.”

One of the most sought-after seaside resorts in Calvados is Honfleur, a picture-postcard port town with cobbled streets and some fine examples of the half-timbered houses that are characteristic of Normandy. The style is a legacy of the Middle Ages, when wood was used both inside and outside the house for decoration and security. Traditional townhouses in Honfleur are extremely popular, especially among Parisians, and they can command high prices. For example, a recently restored six-bedroom Anglo-Saxon-style property is currently on the market for €1,300,000. But a more reasonable and certainly no less traditional thatched-roof cottage, called a chaumière, just outside Honfleur is being sold for €299,000. The three-bedroom thatched house is set in pretty gardens, and also has an independent studio.

Another popular resort is Deauville, which hosts the annual American Film Festival every September. The affluent town, which is sometimes referred to as the Northern Riviera, has for years been a magnet for the rich and famous. With its long wide beaches and boardwalks, smart boutiques and internationally acclaimed racecourse, Deauville is certifiably chic, and real estate doesn’t come cheap. One six-bedroom house on the outskirts of the town is currently being marketed for €695,000. If you would prefer to get a bit more for your money then head to Trouville, a slightly more modest resort just up the coast—the two towns face one another across the Touques River—where you can find similar houses for up to €200,000 less.

West of Calvados, and surrounded on three sides by the English Channel, is the Manche département which boasts one of the most famous landmarks in France. Mont Saint Michel is the site of a stunning monastery built on a rocky island hill that juts from the sea one mile off the coast and is renowned for its huge tides, which can rise up to 40 feet. Travel inland from this magic mount and you will discover bountiful stretches of meadows and orchards in which the region’s famous apples grow. Here property prices are relatively low compared to elsewhere in France—around €1,781 per square meter as opposed to the national average of €3,403.

The département of Orne, slightly to the east, is even more reasonable. Much of its lovely landscape is very similar to Calvados, except the Perche forest—an area of dense woodland that is popular with Parisians in search of a great escape to greenery. (It’s also the home of the Percheron breed of horses.)

According to François Iorsch, of Normandy Property Assist, its proximity to Paris—about a one and a half hour drive—makes it very attractive to the domestic market.

“Twenty percent of the area is covered with forest, and the rest is rolling countryside. There are also some very old properties from around the 1850s, and a large number of châteaux. Historically it is very interesting, as the Perche was independent for a long time. At one time the local residents were fighting the French, the English and the Vikings.”

In the Perche prices average some €1,540 per square meter, and bargains can still be found. “I have a large manor house to renovate on my books which dates back to the 14th century for €350,000, and you can still find livable bargains for around €80,000 for a semi-detached townhouse.”

Iorsch believes prices could get even lower. “Figures have gone down around 20 percent in a year, and we won’t know what’s happening now until September. I used to have one inquiry a day, but I now have one a month. It’s been very hard.”

In Haute Normandie the story is the same, although less dramatic. Prices have fallen around five percent over the last 12 months, but many in the business believe they will start to creep back up again by the end of the year. In the département of Eure—the closest to Paris—house-hunters can find many fine examples of longères, one of the most typical of Normandy houses. Traditionally built in a rectangular shape, the longère is oriented with the back of the house facing the dominant wind direction. The properties are often only one story high, with thatched or slated roofs. A typical longère with three bedrooms and one bathroom near Les Andelys is currently on the market for €321,000.

The fifth department in Normandy—Seine Maritime—includes some of the country’s largest and most attractive ports. In fact Le Havre, France’s most important port after Marseille, was declared a UNESCO World Heritage Site in 2005, in recognition of the successful way in which it has been rebuilt after the Second World War. UNESCO honored the “innovative utilization of concrete’s potential” and stated that the city was “an exceptional example of architecture and town planning of the post-war era”.

Dieppe, 70 miles north along the coast, is another striking port city that hosts one of the best street markets in northern France, complete with stalls selling fish straight from the boats. It is also the nearest beach to Paris, making it extremely popular with Parisians. Prices here are a lot more affordable than in the capital—with an average 120-square-meter house costing around €228,000.

But perhaps the best bargain beach resort in all of France is the seaside city of Fécamp, which is nestled between Le Havre and Dieppe on the Côte d’Albâtre (alabaster coast), near the white cliffs of Etretat so often painted by the Impressionists. The historic town was originally little more than an authentic fishing village that was once a fief of the Dukes of Normandy. Now virtually a textbook of architectural history from Gothic and Renaissance monuments to modern neo-Norman-style villas, Fécamp is a favorite with people looking for a second home. A two-bedroom apartment with a sea view is currently on the market here for €107,000 while a typical fisherman’s house near the beach is being offered at €116,300.

Originally published in the September 2009 issue of France Today.