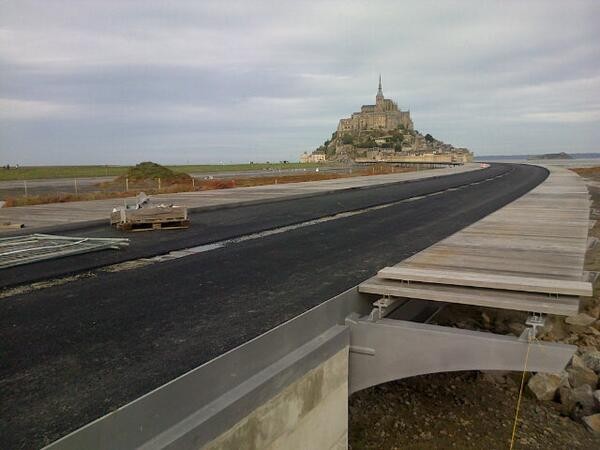 With three million tourists per year, Mont-Saint-Michel in Normandy is the second most visited site in France after the Eiffel Tower. Today’s camera-clad visitors follow in the footsteps of the Christian pilgrims who’ve flocked to this important holy place for more than 1000 years. Historically, pilgrims accessed the island abbey by walking across the mud flats at low tide. (Beware the quick sand! Not to mention the powerful currents; the Bay has the greatest tidal ranges in Europe, which move at the speed of a “galloping horse.”)

There’s something mystical about this approach to Mont-Saint-Michel across the sheep-dotted tidal marshes, when you first glimpse the abbey’s medieval spire appearing to rise directly out of the sea. But in recent times, the Mont’s very essence has been threatened, as silt gathered around the man-made causeway that links the island to the mainland. The island wasn’t an island anymore.

An incredible engineering project was launched in 2009 to remove the sediment from the bay and return Mont-Saint-Michel to its natural marine state. As a sustainable development initiative, the restoration has achieved worldwide attention. An innovative hydraulic dam uses the river’s natural currents to sweep the silt out to sea, and the old parking lot—which was a traffic-clogged eyesore at the foot of the Mont—has been closed. Now visitors park away from the site, and shuttle buses cross the causeway.

The projet’s final stage will entail the construction of a light pedestrian bridge in 2014, followed by the demolition of the century-old causeway in 2015. In addition, oak boardwalks have been erected along the causeway for pedestrian traffic. The project has not been without controversy, but the end result is a more pleasant visitor experience at one of the world’s most incredible UNESCO World Heritage sites.