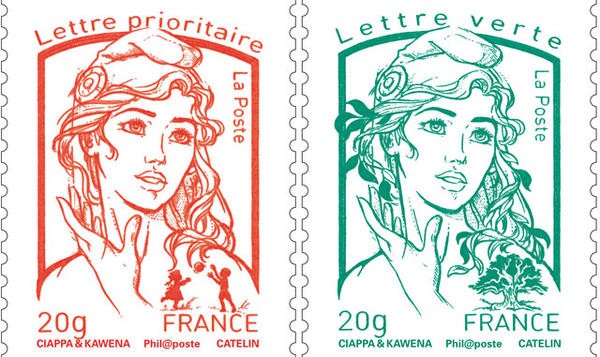 The lady with her Phrygian cap, embodying the ideals of Reason and Liberty, has been the symbol of France since the 1848 Revolution, when Honoré Daumier first painted her image. Marianne is also the image on standard French stamps, and by tradition each newly-elected president chooses a new face for the role—among the Mariannes in the past have been Brigitte Bardot and Catherine Deneuve.

The Marianne chosen by President Nicolas Sarkozy was not his new bride, Carla Bruni, but a young woman drawn by 68-year-old engraver and artist Yves Beaujard. The new stamp was produced in 13 colors, for 13 different euro denominations, and released on July 1 2008. Beaujard, who worked in the U.S. for ten years as a banknote engraver (and later illustrated the Hardy Boys series in France), says that his Marianne is the spiritual heiress to the on e designed in 1903, which glorified a rural and peasant France.

The new government of Françoise Hollande announced the new version of the Marianne stamp out on July 16th 2013, designed by the duo of David Kawena-Olivier Ciappa who stated that it is a mix of different faces but mainly inspired by Inna Shevchenko, founder of the feminist protest group FEMEN.

Originally published in the March 2008 issue of France Today and updated in July 2013.