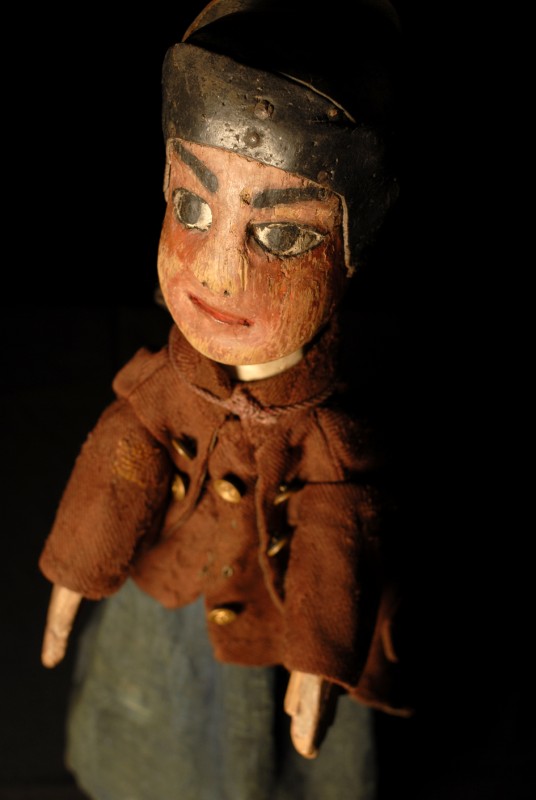 From his humble beginnings as a distraction from the dentist’s pliers, Guignol has become a French icon. This year the cheeky puppet celebrated his 200th birthday-two centuries of tweaking the nose of authority and poking fun at the rich and powerful.

Guignol began making mischief in 1808. His creator, Laurent Mourguet, was poorly educated and eked out a living in his home town of Lyon working at odd jobs. One of these part-time occupations was street dentist-a frightening thought in the days before anesthetics. To attract his customers-and then to distract them from the excruciating pain of bare-knuckle dentistry-he created a puppet show. His first shows featured Polichinelle, a French version of the Italian commedia dell’arte character Pulcinella, who was also the origin of the English Punch, of Punch and Judy fame.

Mourguet later began drawing on his own life and surroundings in Lyon. A well-known local character and friend of Mourguet’s-le Père Thomas-became the wine-loving, red-nosed, unshaven Gnafron. Next up was Guignol. Apparently based on Mourguet himself, Guignol has one of those universally appealing faces-with his big eyes, tiny button nose and open expression, Guignol was easy to like. (And he is definitely not to be confused with the much later Grand-Guignol, the theater of the gory and macabre that evolved in Montmartre during the early 20th century.

Guignol’s fame spread throughout France, helped, perhaps, by Mourguet’s 16 children, who fanned out across the country. The director of Lyon’s Théâtre Le Guignol, Stéphanie Lefort, described the success of Guignol: “He was the right puppet, in the right place, at the right time. I can’t really explain it, it’s a sort of miracle.” Guignol spoke for the man in the street, the working class, the poor, the downtrodden. He spoke for democracy at a time when the new French Republic and democracy were still precarious but rebellious energy surged through the country.

While Guignol is unmistakably French, he is truly a son of Lyon. The Lyonnais are not only proud of being Lyonnais, they are proud of not being Parisian. Lyon has a history of rebellion-from the French Revolution to its place as the headquarters of the Resistance during World War II. This stubborn independence is also reflected in Guignol.

There are several Guignol venues in Lyon. One of the oldest is in the large Parc de la Tête d’Or. As Guignol celebrated his 200th anniversary, so the theater marked its 60th birthday. Yvonne Moritz, 84, founded the original puppet theater there, along with her late husband. For decades, she has “played” Madelon, Guignol’s wife. At the beginning, she and her husband cycled to the park every day and erected their little theater. Now Guignol & Co. have a protected 19th-century building in the center of the park for their daily performances, a very grand kiosk. “I got into it because my husband wanted to do Guignol, because I had good diction and because I thought ‘why not?’. It is still exciting though, otherwise it is not worth it,” said Moritz.

Her audience of children, and their parents, certainly find it exciting. “Là-bas, là-bas-over there!,” they scream at Guignol, frantically pointing at the villain. You don’t need to speak French to work out, and enjoy, what’s going on, but some of the linguistic jokes and wordplay will be lost.

The more elaborate Théâtre Le Guignol was established in 1998, so in this year of Guignol-related anniversaries, it marked its 10th birthday. This one is a real theater, with seating for about 130 people, a stage with wings and scenery flats. While there is a repertoire of classic Guignol pieces that dates to the 18th century, the Théâtre Le Guignol crew writes its own scripts too, and later this year will be staging a 1930s-style detective story, where Guignol the Private Eye takes on the case of a beautiful client, who is not all she seems…. The theater even stages “adult” Guignol shows. These are generally more political, more satirical and poke fun at national and world figures in much the same way as the long-running television news show parody Les Guignols de l’Info does with its puppet caricatures of prominent political figures. In some “adult” shows Guignol and Gnafron even become lovers!

Stéphanie Lefort of Théâtre Le Guignol said that some people mistakenly think that children today would be too sophisticated to enjoy a puppet show. “That’s not true at all. People think kids nowadays are blasé, but when they watch Guignol they shout and scream like wild things. And it’s not just the kids, the adults shout, too.”

Manipulating a puppet is harder than it may sound, explains Lefort. Most actors at the theater spend a good two years learning the craft. Not only do you have to do the voice, react with the other characters, hit your cues and stand in the right spot, but you have to physically hold the puppet above your head all the time without letting it droop.

Lyon has arranged several events this year to commemorate the bicentennial of one of its most famous sons. Guignol companies from all over France performed at the Parc de la Tête d’Or in May and June. In June professional puppeteer Louis Dominque Bazin took over Lyon’s Place des Terreaux. Around 1,000 would-be puppeteers took part in a workshop, billed as the world’s biggest puppet lesson, with Bazin giving directions via a giant screen. In the autumn a special anniversary show-a Guignol biography-will be staged at the Théâtre Le Guignol. Virtually all the Guignol troupes in Lyon are expected to take part in a grand version of one of Laurent Mourguet’s classic pieces, Le Déménagement (Moving House), specially rewritten for the occasion. Exhibits, guided walks, a Guignol-themed treasure hunt and classes in the Lyonnais dialect spoken by Guignol and friends are also planned.

The city’s Musée International de la Marionette, which shares the splendid complex of 16th-century Renaissance buildings called the Hôtel de Gadagne with the Musée Historique de Lyon, offers an extensive collection of Guignol memorabilia, including original puppets made by Mourguet. The Museum is closed for renovation, but slated to reopen in spring 2009.

It may seem astonishing in these days of Xboxes and Playstations, Grand Theft Auto and The Sims that a 200-year-old puppet is still pulling in the crowds, but Guignol is one of the few fictional characters who has become an integral part of France’s heritage.