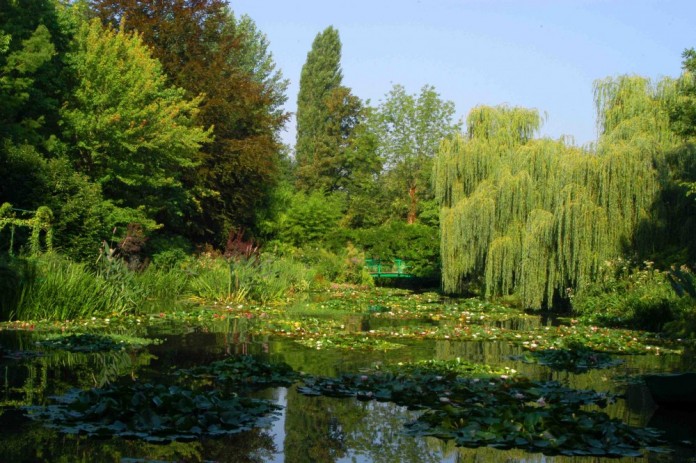 The Fondation Claude Monet, including the home and gardens of the Impressionist painter, opened on April 1 for the 2012 season.

When 42-year-old Claude Monet rented an abandoned cider farm in Upper Normandy in 1883 his finances were at such a low ebb that he had to borrow money to move his large family to the rustic pink-stuccoed farmhouse that had caught his fancy. He was enchanted by the village of Giverny, which he’d discovered in April, when its trees were blossoming and its roads were lined with exuberant wildflowers.

Inspired by the beauties of the Norman landscape, Monet became an avid gardener, and by 1886 his commissions were increasing and he was able to invest some of that income in his gardens. He sought advice from gardener friends, from painter Gustave Caillebotte to statesman Georges Clemenceau; traded cuttings; studied seed catalogs; attended plant shows and visited botanical gardens. He ripped out the trees that created too much shade, planned his color patterns, dug flowerbeds, seeded and watered.

Painting was put on hold while Monet worked as his own head gardener, but he always had it in mind. According to Foundation director Hugues Gall, “He planned the garden like motifs for his pictures and his paintings became the inspiration to continue the garden.” Once the gardens were planted, for several years Monet traveled and painted elsewhere while they grew, gathering ideas for improvements along the way—in Holland he was inspired by the brilliant tulip beds and in Italy by the vibrant colors that later appeared in his gardens and his art.

By 1890 his fortunes had improved so much that he was able to buy the property, which he called the Clos Normand. Soon he added an additional strip of marshy land to the south, where he planted the water garden, diverting a branch of the river Epte to supply it. Creating two willow- and wisteria-shaded pools, he experimented with the various varieties of water lilies that would appear in paintings that now adorn the walls of the Musée d’Orsay and the Orangerie.

Once the gardens had grown sufficiently, Monet began to paint them, completing his first ensemble view in 1895. His gardens remained a source of inspiration for the rest of Monet’s life.

After his death in 1926 the gardens slowly disintegrated, and it wasn’t until 1976, with the arrival of former Versailles curator Gerald Van der Kemp and his American wife Florence that their renaissance began. Having raised funds for the restoration of Versailles, the couple took Giverny as their next mission, raising millions of dollars, mostly from generous American donors. They hired head gardener Gilbert Vahé, who with his team researched archives, documents, photos, letters and receipts from seed merchants, then labored to recreate Monet’s masterpiece. After years of restoration work, the property was opened to the public in June 1980.

Vahé retired last year after more than thirty years as head gardener and these days his successor, James Priest, ensures that every season brings its beauties: in spring the bulbs, pink and white blossoming fruit trees, iris and delicate purple and white wisteria; in summer the brilliance of morning glories, foxgloves, nasturtiums, columbines and water lilies; in fall the blaze of dahlias, asters, tall hollyhocks and golden sunflowers.

Besides the gardens, the house is open to the public, restored to the appearance it had when children raced through the rooms and Renoir, Sisley, Cézanne, Pissarro, Berthe Morisot and Mary Cassatt would drop by for a visit and a stroll through the gardens. Its colorful rooms include elegant upstairs bedrooms, a pretty blue salon, kitchen with its massive stove, and dining room whose walls hold Monet’s collection of Japanese prints.

With over 500,000 visitors a year, there can be long waits for ticket sales on busy days. So it’s a good idea to buy and print tickets online in advance—all Internet tickets allow you to skip the waiting line. website