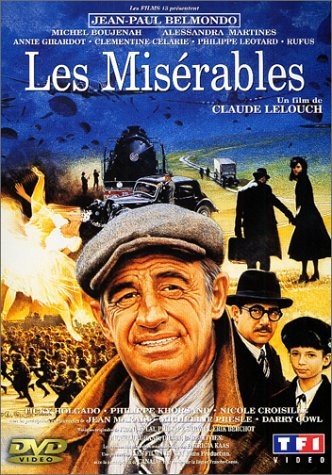 After an eight-year hiatus while he recovered from a stroke, beloved French actor Jean-Paul Belmondo returned to the big screen in 2009 with Un Homme et Son Chien (A Man and His Dog), a remake by Francis Huster of Vittorio De Sica’s Umberto D. Here’s a look back at five of the most memorable films in his prolific career.

A Bout de Souffle (Breathless) Jean-Luc Godard, 1960
Belmondo shot to instant fame in one of the most influential films in cinema history, Jean-Luc Godard’s first feature, co-written with François Truffaut. Michel Poiccard (Belmondo), a charismatic car thief who has killed a cop, wanders the streets of Paris trying to hustle money for his escape and simultaneously court Patricia (Jean Seberg), his unfaithful American girlfriend, who earns her living selling the Herald Tribune on the Champs-Elysées. With his unconventional looks and raw talent, Belmondo soon became one of the most popular—and some say sexiest—actors of the 1960s and ’70s, in tandem with his friend Alain Delon.

Un Singe en Hiver (A Monkey in Winter) Henri Verneuil, 1962
Jean Gabin and Belmondo—two generations of iconic actors with similar tough personas—starred together only once, in this comedy about friendship and the meaning of life. Albert (Gabin), owner of a hotel in a small Normandy village, is an ex-alcoholic who has sworn to his wife he will never drink again but misses his past adventures. The arrival of Gabriel (Belmondo), a hard-drinking young man trying to forget a failed marriage, sets them both on a binge that soon gets out of control. Michel Audiard penned the script, including gems like: “Ce n’est pas le vin qui me manque, c’est l’ivresse!” (It’s not the wine I miss, it’s being drunk!). In France, Belmondo became the symbolic heir to Gabin, who was then in his late 50s and revered as the “godfather” of French cinema.

L’Homme de Rio (That Man from Rio) Philippe de Broca, 1964
Abduction, spies, lost treasure and, of course, love: All the ingredients are on hand in this energetic adventure spoof and romantic farce driven by Belmondo’s on-screen chemistry with beautiful, spirited Françoise Dorléac (Catherine Deneuve’s sister, who died in an auto accident in 1967). Shot almost entirely on location in Brazil, the film established Belmondo as an international star, as he portrayed one of those tough but charming characters that became his trademark.

Le Professionnel (The Professional) Georges Lautner, 1981
During the 1970s and ’80s, Belmondo starred in dozens of action-packed commercial movies that were consistently box-office hits and almost as consistently panned by the critics. In this simplistic political thriller, Belmondo plays a secret agent who, betrayed by the French government, is out for revenge. The film is both violent and humorous (thanks again to Audiard’s witty dialogue), and Belmondo is flawless in his familiar role of a solitary, honest action hero. Ennio Morricone composed the outstanding score.

Les Misérables Claude Lelouch, 1995
The César for Best Actor went to Belmondo in 1989 for Itinéraire d’un Enfant Gâté, a film by Claude Lelouch. In 1995, Lelouch offered Belmondo another unforgettable role in Les Misérables—based on Victor Hugo’s legendary novel but updated to the Nazi occupation of France during World War II. It follows four people—each inspired by a character in the novel—whose paths cross as the story moves back and forth between the 19th and 20th centuries. Belmondo, in one of his most remarkable performances, plays both Fortin, an ex-boxer, and Hugo’s iconic hero Jean Valjean.

Originally published in the April 2009 issue of France Today