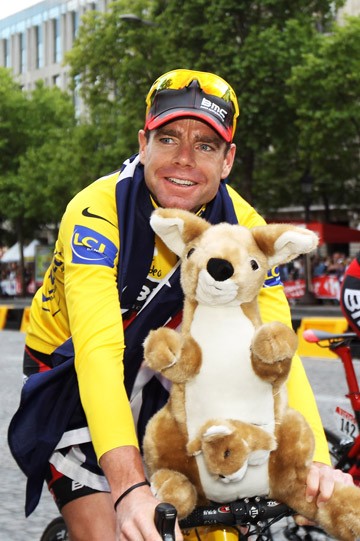 Cadel Evans became the first Australian ever to win the Tour de France yesterday in the most suspense-filled Tour in decades. With the winner uncertain right down to the last time trial on Saturday, Evans vaulted past Luxembourg’s Andy and Frank Schleck, who finished second and third, to take the winner’s yellow jersey. All Evans had to do to clinch his win on Sunday was avoid a crash or a fall, and that he did, crossing the finish line on the Champs Elysées with a glass of Champagne in hand, then taking a victory lap with a cuddly stuffed kangaroo on his handlebars—a reminder that his difficult demeanor in the past had earned him the ironic nickname “Cuddles”.  After finishing second in 2007 and 2008, and breaking his elbow during the 2010 race, the 32-year-old Evans became the oldest man to win the Tour de France since Henri Pélissier in 1923.

For the Schleck brothers, taking second and third place instead of a hoped-for one-two finish was a disappointment, but it marked the first time the brothers have shared the Tour’s winners’ stand. Mark Cavendish won the final sprint on Sunday, becoming the first British rider to win the green jersey for the race’s overall best sprinter, and Spain’s Samuel Sanchez won the polka-dot jersey for best climber.

Pierre Rolland took the white jersey awarded to the best young rider, winning Friday’s climb up the legendary Alpe-d’Huez peak in the French Alps. Rolland’s victory gave French pride another boost after the unexpectedly strong showing of Thomas Voeckler, who held onto the yellow jersey for ten days in a row—a feat he also accomplished in 2004—but fell back after the 19th stage last Friday to finish fourth overall in this year’s grueling three-week, 3,430.5 kilometer (2,131 mile) race.