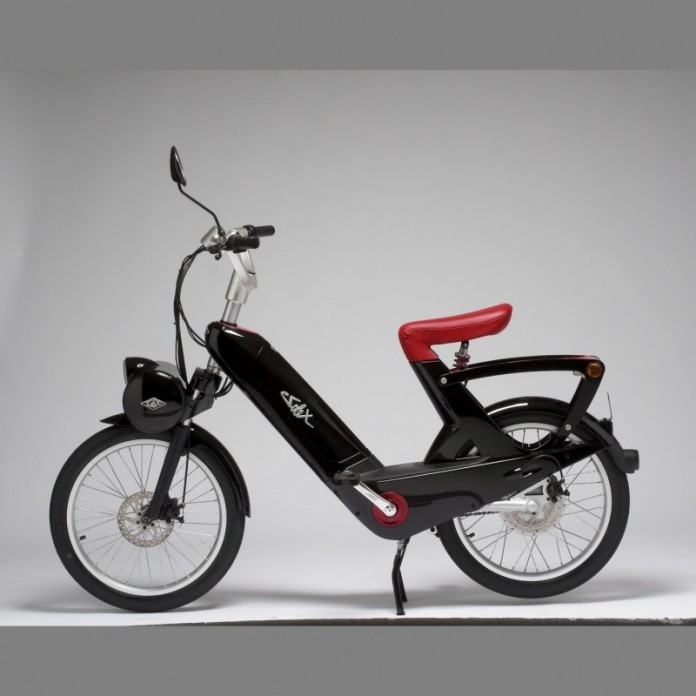 The Vélosolex made its first appearance in Paris in 1946, an economic little motorized bicycle offering low-cost transport in the post-war economic pinch, plus a lot of youthful freedom and fun in the bargain. In the 1950s, the Solex was as emblematic of the streets of Paris as Vespa scooters were of Rome, and movie buffs have an indelible image of Jacques Tati, pipe clasped in his teeth, putt-putting along in the classic 1958 film Mon Oncle. But eventually prosperous times bypassed the little moped that could, and over the last 30 years the company was split up and its components bought and sold several times. (Velosolex America LLC markets a gas-engine bike very like the original.) But in 2004 the new French company Cible bought the Solex brand from its then owner, and has now brought the Solex back to Parisian streets, with a dynamic new look by legendary auto designer Sergio Pininfarina and an ecologically correct difference: it’s now the e-Solex, powered by a 400-watt electric motor that’s easily removable and rechargeable from a standard 220V wall plug. With the e-Solex there’s no noise, no pollution and almost no upkeep necessary, says the manufacturer. The handsome bike also comes with disc brakes, front suspension and a shock-absorbing saddle. Maximum speed 35 km (22 mi) per hour, distance possible on a single recharge, 25-40 km (16-25 mi), using about €1 worth of electric energy every 1,000 km (620 mi). The price in France: about €1,250.

Originally published in the December 2008 issue of France Today.