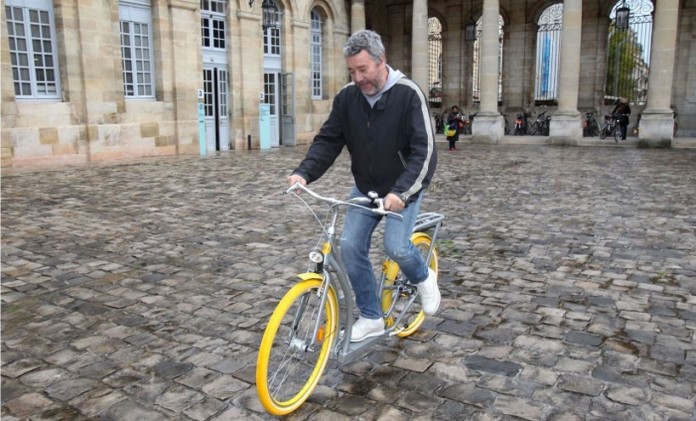 Paris has Velib’, but Bordeaux just got the Pibal. (Happily, the French capital’s successful bicycle lending program has seen a slew of copycat versions spring up in other global cities like NYC. Bordeaux introduced its own bike-sharing service in 2010.) Having been designed by Philippe Starck, Bordeaux’s new scooter-bike hybrids are decidedly cool.

The first prototype of the Pibal—which takes its name from the pibale (baby eels) which inhabit the region’s Gironde estuary—was recently unveiled by Mayor Alain Juppé and Philippe Starck. Twenty Bordelais will test-drive the models– designed in a striking yellow color with an automatic two-speed hub, ergonomic seating and a foot rest. Starck took into account the suggestions of city residents in creating this “new means of locomotion.”

By the end of the year, 3000 of the bikes will be manufactured by Peugeot. As reported by DesignBoom, the number of Bordelais commuting by bike has tripled in the last 10 years, and the new Pibal is hoped to provide an alternative public transportation system.