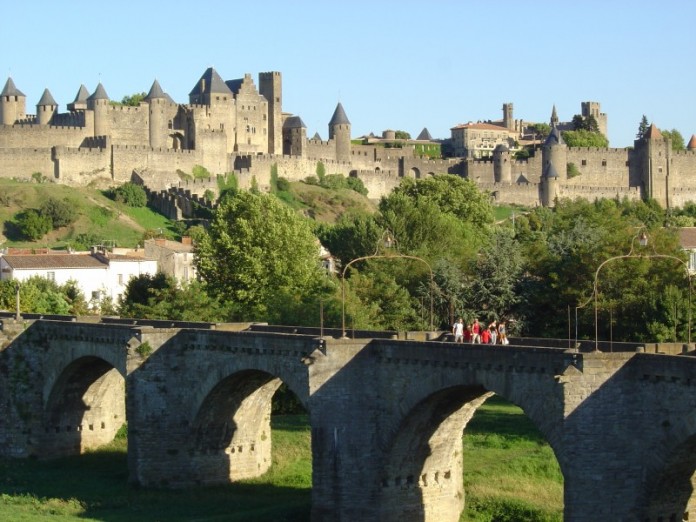 Each time I round the final bend of the long and laborious A61 autoroute leading to Carcassonne, I hear myself unexpectedly catch my breath yet again. There, on a distant hilltop, stands the perfect medieval fortress-as magical as the very first time I saw it as a backpacking student many years ago.

Dominating the surrounding countryside for miles around, the citadel seems to rise out of the vineyards like an apparition from a fairy tale. Indeed, it is said that the fortress city’s massive double ring of stone ramparts, towers and barbicans so mesmerized Walt Disney that he used it as the model for Sleeping Beauty’s castle.

The original settlement on the hilltop dates back to the 6th century BC, although the first defensive circle of ramparts and barbicans was not built for another 200 years or so. Situated in the wide valley that leads up from the Mediterranean between the Massif Central and the Pyrenees, the town’s extreme strategic importance made it the site of many fierce battles over the centuries that followed. During its rich and colorful history, Carcassonne has been a Roman town, a Moorish conquest, a feudal stronghold, a Cathar redoubt and a frontier outpost on the border between France and Spain. The flat, empty space between the inner and outer walls, known as the lices, was the site of fairs and tournaments in the days when knighthood was in full flower.

Today it’s the largest fortress still standing in Europe and a tourist honeypot, as well as the administrative center of the Aude department, in the region of Languedoc-Roussillon. Last year, more than three million visitors heeded the advice of 19th-century French songwriter Gustave Nadaud, who wrote, “You should not die without seeing Carcassonne.”

But the walled citadel known as La Cité is by no means the only attraction. Beneath the citadel, on the opposite side of the River Aude, is La Ville Basse-the Lower Town-an early settlement razed after the 13th-century Cathar crusades and rebuilt by King Louis IX (Saint Louis, who also built the second ring of ramparts) in an orderly checkerboard square. Today, it’s a bustling hub both summer and winter, with stylish boutiques, lively markets and a thriving arts scene. The picturesque Canal du Midi meanders alongside and traverses the surrounding countryside, which now produces excellent wines including Minervois, Corbières, Fitou and the simple vin de pays d’Oc. And, of course, it’s only 75 km (47 mi) from the Mediterranean coast.

It’s little wonder that Carcassonne is a UNESCO World Heritage site and one of the most visited sites in France. It is also not surprising that more and more francophiles have decided to make their homes in Carcassonne and its outlying areas.

Fiona Marshall is one of them. A trip to Carcassonne more than ten years ago left such an impression on the British pensioner that as soon as she had retired she rented out her three-bedroom house in Bath, in southwest England, and arrived in Carcassonne with a mission. Her dream was to live in one of the medieval stone houses in the shadows of La Cité, but in reality she found those available were overpriced, small and dark, with very little outdoor space, if any. So she ventured slightly further away from the fortified walls to the center of the modern town, where she found a light and airy modern apartment with views of the fortress’s 38 towers, which she bought for €115,000 ($181,000).

“Ever since I came on holiday here in the early 1990s I had my heart set on moving to Carcassonne,” she says. “I had visions of waking up in my ancient townhouse, nipping out to buy fresh croissants and then breakfasting in my rose-filled garden. A cliché, I know. But in reality my bank account was just too meager, so I had to face up to the fact that I had to move slightly further away from the castle, and downsize. But I have never been happier. I love the gentle way of life, the hot summers and warm winters, and of course all the wonderful, inexpensive wine is certainly a bonus.”

It’s fair to say that had Marshall acted on her impulse ten years ago, she would have been able to pick up a great deal more for her money than she can today. Prices in Carcassonne have seen a considerable increase in recent years thanks to the area’s popularity with foreigners who are able to travel on any one of the many budget airlines that now fly into the region. The airports at Carcassonne and nearby Toulouse and Nîmes are all serviced by cheap carriers from Paris and a number of British airports, making the journey from England and America to spend a séjour in the sun all the more viable.

“Property prices in Carcassonne and its surroundings remain fairly competitive,” says real estate expert Greca Sandford. “However, prospective buyers must be realistic about the nature of the architecture here. More houses tend to be rendered (plastered) rather than exposed stone, and as the majority of houses in the center of towns or villages do not have extensive gardens, you will pay a premium for outside space.”

Carcassonne itself has a large number of townhouses that have been converted into apartments, sometimes with access to an interior courtyard or with balconies or terraces, adds Sandford, who works for the lifestyle and property website French Entrée. Fully renovated apartments start from about €50,000 ($78,000) for a studio, and go up to more than €130,000 ($204,000) for three bedrooms. Houses in Carcassonne are particularly rare, and prices tend to start at around €200,000 ($314,000) depending on size and the amount of renovation required.

To obtain more house for your money Annelise Bosshard, of AB Real Estate, advises prospective buyers to head outside of Carcassonne, to any of the outlying villages and towns farther from the sea.

Bosshard, who has sold houses in the Languedoc-Roussillon region for the last 11 years, notes that “prices have doubled here over the last decade, and while it is true that the market has slowed down in recent months, it really depends on the individual circumstances of the vendors. For example people wanting to sell their house quickly because of a change of job, or because they want to downsize, might be willing to take an offer of 10 per cent below the asking price. But if they are in no hurry to sell, then they are sticking to the original asking price.”

Bosshard says prices in Carcassonne itself remain on the higher end of the spectrum for the region because it is a popular town attracting many prospective buyers for every property available. However, if you prospect in the towns within a half-hour drive of Carcassonne, prices begin to drop considerably.

Originally published in the September 2008 issue of France Today.