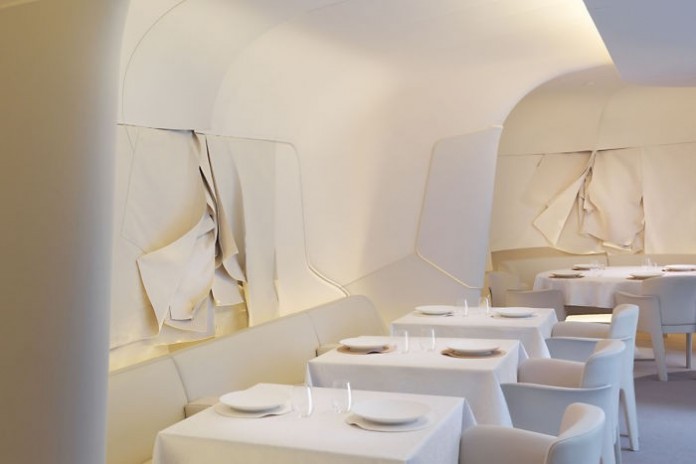 Thierry Marx, the king of molecular gastronomy and judge on Top Chef France, has opened an école de boulangerie in the 20th arrondissement of Paris. What’s so extraordinary about this baking school is its mission: to train the unemployed and unskilled in a solid métier, thereby providing an opportunity for aspiring bakers to open up their own businesses. Traditionally, the professional formation is quite intensive and inaccessible for those without the means, so it’s remarkable that Marx’s school is free.

Moreover, Cuisine Mode d’Emploi(s), La Boulangerie aims to preserve an important part of French culinary heritage and traditional savoir-faire. Indeed, what is more French a symbol than the baguette? The timing couldn’t be better, as a nationwide bread awareness campaign was launched last summer to combat fears that France’s bread consumption is in decline. (Billboards ask: Coucou, tu as pris le pain? “Hey, have you picked up the bread?”) Another recent ad campaign celebrates the work of artisans– from your local coiffeur to your pâtissier.

It’s a project that’s close to home for Marx. Now at the helm of the Mandarin Oriental’s kitchens, the Michelin-starred chef hails from Ménilmontant in the 20th arrondissement. He is launching the school in homage to Bernard Ganachaud, the talented, local boulanger with whom Marx trained when he was 16 years old.

To finance the concept, Marx turned to a very 21st century model: crowdfunding. Through the website, My Major Company, Marx has already surpassed his initial goal of 10,000 euros by raising more than 33,000 euros. Candidates must live in Paris; know how to read, write, do basic calculations; and be motivated to start their own bakery. Priority is given to unemployed individuals without college diplomas. The first session will start on November 18, 2013, with eight students in the class.

The school is located on rue Albert-Marquet. Marx hopes to open a restaurant on the site in 2014.