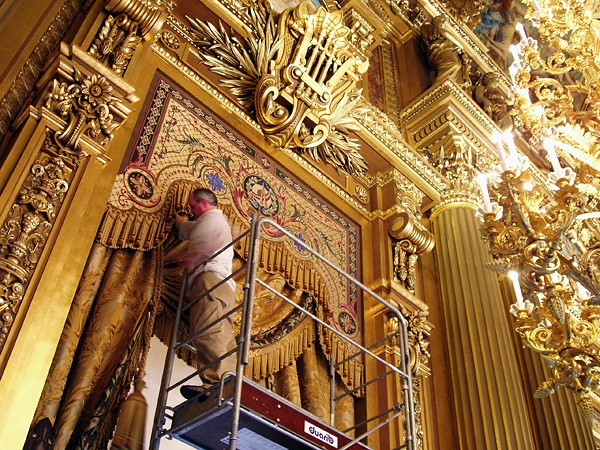 It’s no wonder that master upholsterer Charles Jouffre set up his eponymous company headquarters and workshops in Lyon, a city famed for its rich silks and ornate brocades. Jouffre, who grew up in nearby Saint Etienne, learned his trade by spending a year in Strasbourg as an apprentice with the Compagnons du Tour de France—a still-active association of tradesmen and craftsmen that dates to the Middle Ages—and then carved out his own independent study program for three years, working with the finest artisans in France. After heading up a team of decorators working internationally, in 1987 Jouffre started his own company in a tiny cellar in Lyon. He now has offices in Paris and Manhattan, a workshop in Brooklyn, and specialist upholstery teams working worldwide.

The company works with renowned interior decorators, restoring or producing luxurious curtains, specific decors, stretched wall hangings, and custom made sofas for the quarters of heads of states, private yachts, luxury boutiques, hotels and restaurants. Jouffre’s clients are an eclectic and prestigious international array that includes, in New York, the Four Seasons and Gramercy Park hotels, the Jean-Paul Gaultier boutique and the restaurant La Grenouille; the Alain Ducasse restaurant in Tokyo; chalets in Courchevel and Val d’Isère; the Elysée Palace, the grand foyer of the Palais Garnier opera house, the Crillon and Ritz hotels, and the Hermès and Louis Vuitton boutiques in Paris ; and even the Louis XVIII funeral carriage at the Château de Versailles. Current projects include the decoration of a private residence in Dubai with French designer Philip Starck, and the refurbishment of the lobby areas, the restaurant and bar, and the rooms of the Hôtel Meurice, scheduled for completion in 2011. website