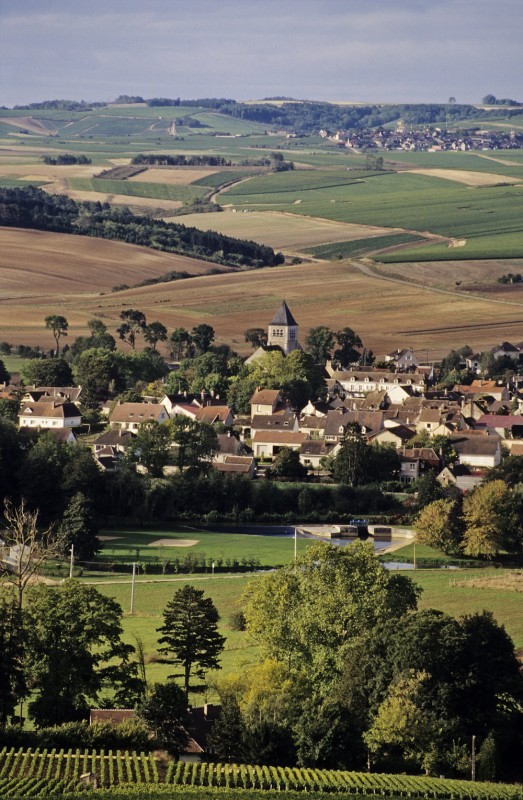 Anyone who thinks that terroir does not matter has not tasted true Chablis.

“Some tourists tell me that they love Chablis, but hate Chardonnay,” says Alain Marcuello, communications manager for Chablis producer William Fèvre. Like almost all white Burgundy, in fact, Chablis wines are made from 100% Chardonnay grapes, but the remark reveals the widespread confusion surrounding Chablis—a French AOC appellation that has been usurped, used and abused around the world. But nothing compares to the real thing.

French Chablis exudes a brisk iodine freshness that’s perfect for summer picnics, or with oysters on the half shell sprinkled with lemon. Depending on style and vintage, its multiple aromas and flavors are sometimes imbued with subtle notes of citrus, green apple, pear and white flowers. Real Chablis is many miles away, geographically and stylistically, from bolder, buttery Napa Valley Chardonnay.

Chablis also differs from fuller-bodied, oak-barrel-aged Meursault or Puligny Montrachet from Burgundy’s Côte de Beaune. Its fresh and zingy character is in some ways more akin to Champagne, partly because soils in both Champagne and Chablis share a uniform, late-Jurassic layer of chalky marl known as the Kimmeridgian, which could well impart the mineral freshness found in both wines.

Also like some Champagne, Chablis can be a long-lasting wine. According to Thierry Brouin, winemaker at Clos des Lambrays farther southeast in Burgundy’s Côte de Nuits region, higher-end Chablis—the grands crus and some premiers crus—are the most underrated white wines in Burgundy, if not all of France.

With finely balanced acidity and richness in the best vintages, such Chablis combines airy elegance with a full-bodied aspect that sneaks up on you. Such higher-end wines are intended for long-term aging just as much as any other Burgundy grand cru, and provide a perfect match for more substantial fare à table, including lobster thermidor, veal scaloppini, roasted poultry and even the local andouillette, a smoked tripe sausage usually made with pork, chitterlings, pepper, wine, onions, and seasonings. (Not for the faint hearted, but the Chablis helps.)

A question of terroir

The charmingly and easily pronounced name Chablis has been taken in vain internationally—again, like Champagne—and used for Australian, Spanish, California and other wines that have nothing whatsoever to do with the 11,000 acres of vineyards surrounding the tiny village of Chablis, in the Yonne département of northern Burgundy, just a 90-minute drive south of Paris. These count among France’s oldest vineyards—Cistercian monks made wine in the Chablis area as early as the 12th century. The territory’s association with Burgundy was cemented during the Middle Ages, when the sinewy Serein river formed the boundary between lands owned by the Dukes of Burgundy and the Counts of Champagne. By the late 15th century, the Duchy of Burgundy took full control of Chablis.

The best way to survey Chablis is from a vantage point above the slopes of its seven grand cru vineyards on the north side of the Serein, facing the town just across the river. The 260 acres here offer a mix of limestone, clay, cool climate and exposure to the sun that is ideal for making great wine, even in difficult years, and the wines they produce were officially classified as grands crus in 1938: Blanchots, Preuses, Bougros, Grenouilles, Valmur, Vaudésir and—the largest in area at 61 acres—Les Clos.

In addition, some 1,800 acres produce premiers crus that can approach grand cru quality, particularly those flanking the grand cru slopes. The vineyards of premier cru Montée de Tonnerre, for example, are just to the right of the Blanchots, and a wine from the best part of the Montée de Tonnerre can easily match the quality of, say, a grand cru from the lower part of the Blanchots. The 2007 Montée de Tonnerre from Domaine Jean-Marc Brocard, for example, is nuanced and complex, offering both richness and minerality. Starting in the early 1970s with seven acres of vines from his father-in-law, Brocard produces wines from some 500 acres in Chablis and elsewhere in Burgundy. Since 1998, Brocard’s son Julien has been developing organic viticulture at the domain. All of the Domaine’s wines can be sampled in the Brocard boutique in town.

But even taken together, the grands crus and the top premiers crus represent only a miniscule portion of the entire appellation, which also counts a whopping 8,000 or so acres producing basic Chablis or Petit Chablis.

A question of style

As with other Burgundies, the producer’s style may be more discernable than a given terroir. Some vintners pick grapes later than others for greater ripeness. Some employ oak for aging their wines, others avoid it. For example, while working as a sommelier on Nantucket Island, I served Domaine Daniel-Etienne Defaix Grand Cru Blanchot to customers accustomed to richer expressions of Chardonnay. The Defaix grand cru is aged two years in tanks on its lees (the dead yeasts) and regularly stirred—a technique called bâtonnage—to add fullness, resulting in a thicker feel on the palate. Other vintners would argue that bâtonnage is detrimental for long-term aging.

Vintners also choose different means of defense against spring frosts, which have decimated Chablis vineyards in the past. The most recent method uses electric wires to heat the vines when frost threatens the bud break. Alternatively, chauffrettes, pots filled with paraffin—which burns for several hours—or connected to nearby fuel tanks, keep the vines warm against frost. Still another, very dramatic method was used by William Fèvre during the last major spring frost in 2003: aspersion, or spraying vines with water to form a protective ice coating. Water freezes at 0°C (32°F), but a vine will not suffer frost damage until the temperature drops to minus 5°C (23°F), so the frozen water provides a protective layer.

A tasting at William Fèvre

There is a bright understatement to the village of Chablis, reflecting the character of the wine. Just under 2,000 inhabitants live in the well-kept village, where many winemakers, like Brocard, have set up boutiques where visitors can taste their wines.

Among them is William Fèvre, the largest owner of grand cru vineyards in Chablis: almost 40 acres including one-fourth of the prestigious grand cru Les Clos, plus some 30 acres of premier cru vineyards. Like other estates, William Fèvre also makes wine from grapes bought from growers, covering almost all appellations, so visitors to the Fèvre shop in the center of town can enjoy a fine survey of Chablis.

Highlights of a recent tasting there included the Premier Cru Fourchaume Domaine 2007, rich and elegant, made from vines averaging 40 years in age. The Premier Cru Fourchaume “Vignoble de Vaulorent” Domaine 2007 was even one step better. Coming from more well-situated vines in the Fourchaume vineyard next to the grand cru Les Preuses, it showed greater depth and concentration. Particularly impressive were the precise, subtle Grand Cru Les Preuses Domaine 2006 and the unbelievably delicious Grand Cru Les Clos Domaine 2006.

When Joseph Henriot purchased William Fèvre’s business in 1998, the wine happily changed styles, switching from late harvesting and a pronounced use of oak to earlier harvesting and far less oak. The result, most observers say, is a purer expression of the wine. Another highlight at William Fèvre is the careful harvesting: “We are among the few Chablis producers to pick by hand and double-check the selection with sorting tables,” says Marcuello. (The Fèvre domain is one of 14 members of the recently formed Union des Grands Crus de Chablis who have set down specific winemaking standards for their group, including hand harvesting.)

Readers take note: Chablis may be the best high-end bargain in France. The average price of a grand cru Chablis is, like the village itself, Lilliputian when compared to other French grands crus from Bordeaux or Burgundy’s Côte d’Or. The wine list at the Hostellerie des Clos, a lovely hotel restaurant featuring the Michelin one-star cuisine of chef Michel Vignaud, includes some 40 basic Chablis wines, 130 premiers crus and 100 grands crus—all at modest prices compared to wallet-crunching wines from other regions. A Ravenau Chablis Grand Cru 1996 for €100, for example, compares very favorably against Bordeaux grands crus on the list selling at their usual prices of €350 a bottle and up. Average prices for prime Chablis hover in the €50-€60 range.

The Hostellerie des Clos itself—once the old medieval hospices of Chablis—also offers an ideal location in the center of town and comfortable rooms at modest prices.

For a more casual meal, there’s the Bistrot de Grands Crus, within the premises of the Fèvre domain, where I dined with Marcuello, who opened a Chablis Bougros Grand Cru 2005, full-bodied enough to match andouillette grilled with Chablis and Chablis-braised veal—perfect evidence that Chablis can accompany meats as well as fish and seafood. The Bistrot’s ambiance is boisterous, the service friendly, and the menu offers typical Burgundian fare including escargots and delectable homemade rabbit terrine with hazelnuts, which we enjoyed as a starter.

As well as the rarified pleasures of the high-end wines, there’s also plenty of very fine Chablis and even Petit Chablis that can be enjoyed for extremely affordable prices—between €8 and €20 per bottle, for example. They would be a delightful quaff for a relaxing picnic atop the Clos vineyard, where wooden tables and shady trees beckon after a short hike along the beautiful vineyard hills. One of the best bargains can be had from the local cooperative, Le Chablisien, which makes lovely Chablis at reasonable prices—and it is open 363 days a year for tastings (closed only on Christmas and New Year’s Day).

Whatever the price point, almost all good Chablis exhibits the characteristic freshness and mineral-infused flavors that set the region apart. Legendary wine connoisseur Hugh Johnson aptly writes of Chablis: “It crosses a succulent grape with an austere soil to shimmering effect, an effect nobody, anywhere, has been able to reproduce. You can find a Meursault look-alike, and a Champagne look-very-alike. Chablis? Let me know if you come even close.

Originally published in the September 2009 issue of France Today.