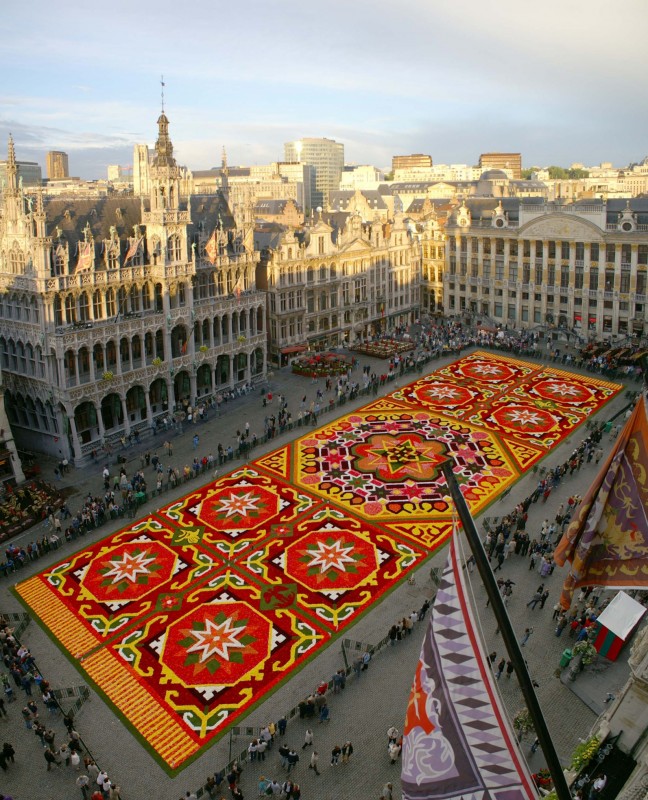 Like people, cities can grow on you. I came to Brussels when I was 11, and this placid provincial place struck me as gloom itself, its leaden skies crisscrossed with trolley wires, its streets gray and grimy, the sepulchral city of Conrad’s Heart of Darkness. To my child’s eyes, its hideousness was epitomized by the yellow-brick Art Deco radio building in the Place Flagey.

Forty years on, that building has become a multicultural arts center hedged in on one side by a mainly Spanish working-class area and on the other by stately stone townhouses set around two large ponds. In the intervening years, Brussels has become an international city, not only the capital of Belgium but also the headquarters of the European Union and of NATO. A quarter of the city’s population is now foreign, or of parents foreign-born, thus creating a complex interweaving of European officials, international business employees, Flemish commuters, Moroccan grocers, Polish builders, Rumanian diplomats, students from the Congo and a melting pot more.

It isn’t only my perception of Brussels that has changed. Cities are essentially made up of people, and that’s where Brussels has changed the most—the people have come out of their shells. Once the downtown pavements were deserted by 10 pm; now all but the most unlucky restaurants and cafes are packed. Once Paris and London were the only places to buy fashion; now Brussels could be called a shopper’s paradise. Belgians have always liked the good life, and that especially includes good food—visit a Delhaize supermarket and you’ll get the idea as you see the display of cheeses and the variety of wines. You won’t find the equivalent of this, not even in London or Paris.

The thing about Brussels is that its charm takes a while to work. There are, of course, the famous sights, striking enough to turn any visitor’s head: the Place du Sablon with its gabled houses and chocolate stores, including above all the stylish Marcolini; the Grand-Place with its sense of 17th-century power; the vast Place du Quai aux Briques with its fish restaurants; the 19th-century glass-roofed Saint-Hubert shopping galleries. And then there’s the beech forest that rims the city to the south. But once you’ve seen these beauty spots, you might leave thinking poorly of the rest of town—dark and rainy, gray and grubby, dull and rundown.

Not so. The people who really like Brussels are those who live here, impervious to its reputation as a boring Euro-bureaucrats’ capital, those who appreciate the teeming activity under the dour surface, those who know where to go. Chic hairdresser Marianne Gray, for instance, has a salon in Paris, on the Left Bank, and another in Brussels, on Rue de la Violette, and she far prefers being here. It’s not just that people are friendly and the rhythm is cool, she says. It’s that she goes to the theater one evening, to an art opening the next, and that everything is within easy reach.

The cultural scene in Brussels is chaotic and under-funded, but it’s rich. There’s almost too much going on. La Monnaie, the city’s opera house, is always packed. The Palais des Beaux-Arts concert hall has a first-rate program of top international musicians. British indie music bands try out their new stuff here before taking it elsewhere, and the Flemish and French-speaking national theaters regularly share productions in defiance of the country’s growing linguistic divide.

Artists from abroad have settled here, attracted by the low rents and easy travel. Argentinian pianist Martha Argerich is one of them, and young musicians have followed in her wake. Graduates from Anne-Teresa De Keersmaeker’s dance school P.A.R.T.S stay on, putting on experimental performances in warehouses. A network of classical concerts in private homes is thriving. After they graduate, former fashion and design students from La Cambre art school open small shops where they sell funky clothes and jewelry.

The Belgian state, though, is in full deconstruction, with Flemish politicians pushing for further regionalization. The political importance of Brussels prevents the country from splitting apart, but its cultural institutions are under-funded, with much of the city’s tax revenues going outside its confines to the regions of Flanders and, to a lesser extent, Wallonia.

But the Flemish of Brussels are a crowd apart from residents of the rest of Flanders, and the inhabitants of Wallonia don’t recognize themselves in the French-speakers of Brussels. Brussels is its own free zone.

When I first arrived, Brussels didn’t have a real city center. It sprawled messily in patches of neglected prettiness—a row of Art Nouveau houses here, there a secret park behind the Hilton Hotel, elsewhere an old abbey in a sunken park. Most people wanted to own a villa in the American-style suburbs, the city’s renowned “green belt”, so automobile traffic has increased greatly. But since then, many foreigners have moved into town and commuters can still live a mere 20-minute drive from the Grand-Place, as I do, and wander fields and forests on weekends.

Today Brussels does have its center, started by the city’s trendy Flemish filmmakers and fashion designers, and encouraged by the foreigners who like the cobbled downtown area in front of the stock exchange. Along and beyond the Rue Antoine Dansaert are the best fashion boutiques, a Moroccan restaurant, and a branch of the trendy Pain Quotidien, a bakery-restaurant with a central pine table d’hôtes. Around the corner is Place Sainte Catherine with its restaurants and cafés, a contemporary art space, a well-stocked cheese shop and small upmarket fruit stalls. Sitting here under the chestnut trees on a balmy weekend morning is one of the best ways possible to enjoy the vivacity of this sometimes chaotic, multicultural and eventually irresistible city.

(The country code for Belgium is 32.)

Fun: Comocomo is a Basque restaurant where kids as well as adults will enjoy the tapas-like dishes served on a conveyer belt, as in many Japanese restaurants. 19 rue Antoine Dansaert, 02.503.03.30.

Drinks: L’Archiduc is an Art Deco bar with a piano downstairs and an upstairs gallery, once frequented by the top jazz musicians of the 50s, including Nat King Cole. Now it’s where the Flemish filmmakers and designers hang out. 6 Rue Antoine Dansaert, 02.512.06.52.

The Brontë walk takes in the areas where Emily and Charlotte lived and taught during their stay in Brussels. www.thebrusselsbrontegroup.org.

Pro Vélo does bike tours of the city, with English-language tours on demand, website. Tours in English can also be arranged with Brussels Bike Tours, website.

Originally published in the October 2008 edition of France Today; updated in October 2009