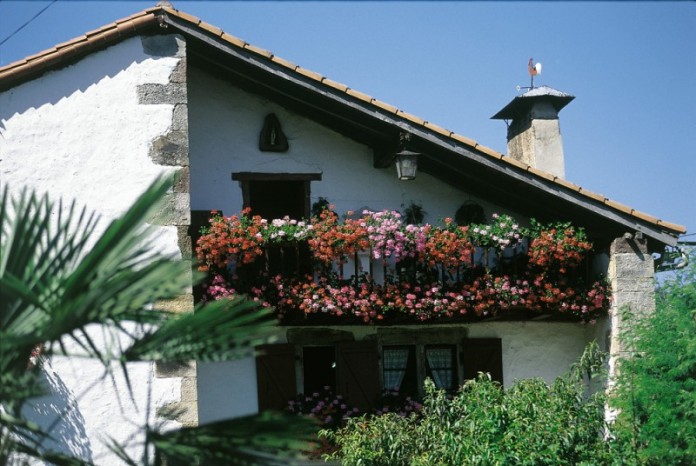 Given its diminutive size, France’s Pays Basque offers house hunters and investors a disproportionate abundance of diversity and charm. Nestled into the southwestern corner of France, the Basque country offers both a long coastline of wide, sandy Atlantic beaches and luxuriant, rolling inland pastures that give way to the majestic Pyrenees.

Officially, the Pays Basque—Euskal Herria in the mysterious Basque language—is part of the Pyrénées-Atlantiques département, along with neighboring Béarn. Architecturally, the area is divided almost exactly as it is geographically. Popular seaside resort towns including Biarritz and Saint-Jean-de-Luz attract thousands of young surfers, drawn by some of Europe’s greatest waves. With them have come modern apartment buildings, built more or less tastefully along the seacoast.

But venture away from the pounding ocean and you’ll find a sparsely populated agricultural hinterland dotted with beautiful old villages and traditional—etxe in Basque (x is pronounced like ch). Dating sometimes to the 17th or 18th century, these properties are some of the most distinctive in France, with their signature whitewashed facades, often half-timbered, and wooden shutters in deep russet red or green—the colors of the Basque flag.

This proudly independent region is a little more difficult to navigate than other French regions because of its complex history. Considered a separate nation by many of the 2.8 million people who live there, the Basque country straddles France and Spain, with three provinces on the French side—Labourd, Basse Navarre and Soule—and four in Spain. Traditionally, it has been the unique Basque language and distinct culture that has defined the Basque population on either side of the Pyrenees, although today those traditions are far stronger in the Spanish Basque country than they are in France. Action by the Spanish Basque separatist movement and the terrorist organization ETA (Basque Homeland and Freedom) is almost exclusively confined to the Spanish side of the mountaintop border. Although arms caches have occasionally been found in the French Pyrenees, essentially the stunning green hills and surfer’s paradise of the French Pays Basque are far removed from the horrors of terrorism, and the region is one of the most sought-after areas in which to live in France.

As almost everywhere else, houses and apartments along the seacoast command significantly higher prices than rural homes inland. Certainly the pièce de résistance in the eyes of those who live there—and for many visitors too—is the city of Biarritz, where fashion designer Karl Lagerfeld entertains le beau monde in his magnificent home. Former racing driver Alain Prost, French TV personality Laurent Ruquier and former President Jacques Chirac all have affinities with the elegant resort city, as did Victor Hugo in his day. Said he: “I know of no other place more charming and magnificent than Biarritz.”

In keeping with such enormous appeal, price tags in Biarritz identify it as a distinctly privileged housing market, says Emmanuelle Hirigoyen, of the real estate agency Le Monde de l’Immobilier. The city has clearly escaped the economic downturn that is crimping housing prices throughout the US and Europe. “Prices here haven’t really changed at all over the last year. There is still a big demand for properties, certainly near the sea, and houses and apartments in the center of town are so rare that they can command high prices. We haven’t yet been affected by la crise, and we are still as busy as ever.”

Large villas with views of the dramatic, rocky coastline are now extremely hard to find, but would set you back around €1 million if you could locate one. Meanwhile apartments in the center of Biarritz are currently selling at around €5,000-€6,000 per square meter—less than Paris, to be sure, but hefty sums nonetheless.

Head slightly further north to the seaside resort of Anglet, with its 11 beaches and surf school, for slightly more modest accommodation with less painful prices. Here property is around €3,500 per square meter, with a two-bedroom apartment in an attractive half-timbered house currently on the market for €200,000. Anglet certainly doesn’t share the same aristocratic history as Biarritz, which was the chosen summer resort of Empress Eugénie, wife of Napoleon III, in the 19th century, but it has a certain appealing spirit of its own. It’s only three miles from Biarritz airport, and also boasts one of France’s finest golf courses (page TK).

Farther south towards the Spanish border, the bustling fishing port of Saint-Jean-de-Luz faces the smaller community of Ciboure across the mouth of the Nivelle River, offering fine, sandy beaches with the arresting backdrop of the snowcapped Pyrenees. On June 9, 1660, the young King Louis XIV married the Spanish Infanta Maria Theresa here, in the church of Saint Jean Baptiste. The house in which the royal bride stayed, belonging to a wealthy local family, still sits facing the port, looking much like a Venetian palazzo, and is now known as the Maison de l’Infante.

The Maison de l’Infante isn’t on the market—it now houses a small historical wax museum—but local properties do command regal prices, only slightly less daunting than those in more exclusive Biarritz. “You’re talking about €450,000 for a three bedroom apartment with a terrace and a sea view in the center of town,” says Hirigoyen. “But go about three or four miles inland, to places like the villages of Ascain or Sare, and you suddenly get a bit more for your money. For example, we have something in Ascain with three bedrooms, a pool and a fair bit of land for €399,000.” Both Ascain and Sare are typical hilltop Basque villages, with charm aplenty and some fine examples of traditional Basque houses.

Another highlight in the Basque region is the town of Saint-Jean-Pied-de-Port, on the river Nive. It’s the former capital of the province of Basse Navarre, still mostly surrounded by its medieval ramparts. The name literally means Saint John at the foot of the gate—in this case the gate was the mountain pass into Spain, and Saint Jean was traditionally the last stop in France for pilgrims on their way to Santiago de Compostella. Today the pretty town is centered around one old cobbled street, the Rue d’Espagne, which descends from the 15th-century Porte Saint Jacques to the Porte d’Espagne. Towering above, the citadel was a strategic stronghold built in the 17th century and later remodeled by the great military architect Vauban. Despite the town’s rich history, prices here tend to be more affordable, with a beautiful five-bedroom farmhouse currently on the market for €389,000.

If you are enamored of the region, but less so of the price tags, then an area to seriously consider is the Béarn, which lies directly to the east of the Pays Basque and comprises the other half of the Pyrénées-Atlantiques département. The predominantly mountainous area, with Pau as its principal city, is hugely popular among people looking for a second home, especially the British. The housing is affordable, the situation is superb and the British connection goes back to the mid-19th century, when Pau— hometown of France’s king Henri IV—became a fashionable winter watering hole for eminent Victorians.

One devoted resident today is Australian Tony Burt, who runs the Agir real estate agency. “We’re 15 minutes from the nearest ski station,” he says. “In 30 minutes you could be in Spain, and we’re an hour from the sea. The people are lovely, and we’re exposed to all the wonderful traditions of France.” Property prices in Pau start at around €300,000 for a family home, he adds, while the same price within a 30- or 40-minute drive outside of town would buy you “something really splendid”.