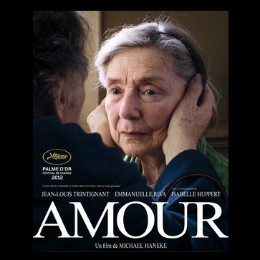 Synopsis: Georges and Anne are in their eighties. They are cultivated, retired music teachers. Their daughter, who is also a musician, lives abroad with her family. One day, Anne has a stroke. She comes back from hospital with her mental and physical capabilities severely diminished. She makes Georges promise that she won’t be made to end her life in care. The couple’s bond of love is severely tested.

On the power of its uncompromising look at life and death and the meaning of a promise, Amour has swept through the award season as no other film has. The Palme d’Or in Cannes, the Golden Globe, the BAFTA, the French César, the European Award and the Oscar for best film in a foreign language are just the main ones out of over 30 awards that the film has garnered. The Wall Street Journal’s film critic said: “Mr. Haneke’s film, exquisitely photographed by Darius Khondji, has won all sorts of prizes all over the world, and no wonder; the performances alone set it off as a welcoming masterpiece,” and the New York Times said that “months after its debut at Cannes this film already feels permanent.”

The theme of euthanasia confronts the viewer with the profound moral dilemma of whether the act of ending someone’s life should always be considered in absolute black and white terms, or whether there is redemption in releasing a human being from their suffering. This unsettling subject is treated with a delicate but unflinching eye. In the way that only a work of art can, the film holds up a mirror to our own apprehensions about mortality and the fragility of the human condition.