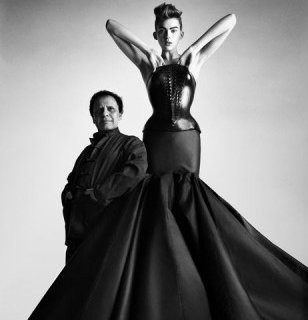 At the crossroads of beaux arts and arts appliqués, the Palais Galliera reopens after extensive renovation with the first ever retrospective in Paris of the celebrated couturier Azzedine Alaïa. To mark the auspicous occasion, the venue is offering free admission to the public on the opening weekend of September 28-29.  The Alaïa exhibition is also presented in the Matisse room of the Museum of Modern Art of the City of Paris (MAM Paris).

An independent spirit, the fashion trailblazer is known to follow the beat of his own drum. His signature style is a sort of “second skin” formed by the way his cut and fabric cling to the body, and is favoured by his high-profile followers like Naomi Campbell, Linda Evangelista or Michelle Obama. Alaïa remains relatively discreet and skeptical of courting publicity, saying about the mediatic style of the creative director of Chanel “It’s too much caricature. Karl Lagerfeld never touched a pair of scissors in his life.”

The seventy iconic models displayed in the exhibition retrace the creative path of the fashion visionary. A Tunisian-born couturier and shoe designer, Alaïa was the son of farmers and started his career as a dressmaker’s assistant. He refers to himself as a builder rather than a fashion designer, and his training in sculpture is reflected in the emphasis on structure and form, as well as his use of ingenious fabrics and rigorous techniques – as in the use of laser cut to give leather the appearance of latticework.

Through his inventivenes and the complexity of his techniques, Alaïa created an impressive body of work that stands out from the crowd. His influence on today’s fashion is fundamental. He was awarded the accolade of Best Designer in 1984, went on to win two Fashion Oscars in Paris the following year, was fêted at the CAPC Museum of Contemporary Art in Bordeaux in 1996, and was inducted in 2008 as a Chevalier de la Légion d’honneur. As further recognition of the transhumance of avant-garde fashion into the field of fine art, his models have been displayed side by side with works by Pablo Picasso, Jean Michel Basquiat, and Andy Warhol.