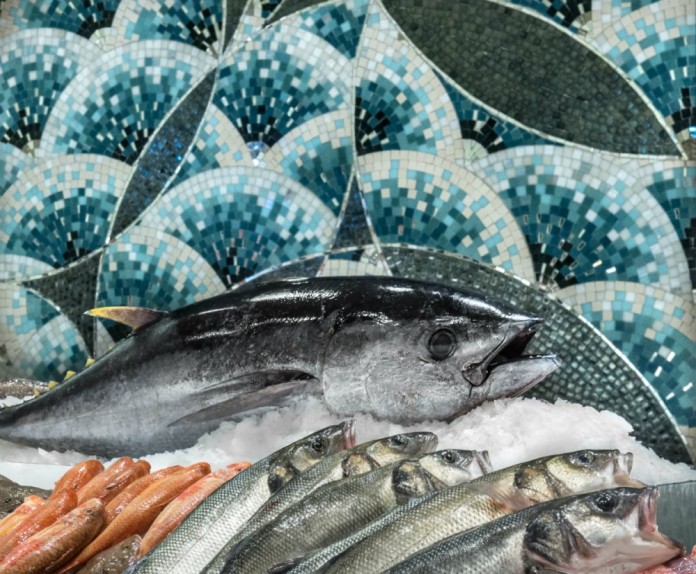 After 18 months of renovation work, La Grande Epicerie de Paris unveiled its dramatic makeover on December 9. Le Bon Marché’s famous gourmet food hall has long been a Left Bank institution and one of the top addresses in Paris for gourmands. From the exquisite butter to the sheer variety of vegetables and meats, La Grande Epicerie is a veritable showroom of the best of French gastronomy and savoir-faire.

The beautifully renovated store is designed like a new Place du Marché, reflecting the Halles Françaises of times past. Shoppers peruse distinct departments—the Pâtisserie, Chocolaterie, Boulangerie, Charcuterie/ Rôtisserie, Boucherie, Fromagerie/Crémerie, Poissonnerie—and can enlist the aid of expert artisans while making their purchases. In the tradition of the 19th century grand magasin, the entire center of the store has been opened up with a glass-domed cupola, and a new set of escalators connect the store’s three levels, creating a sensory visitor experience much like Le Bon Marché itself. (You can gape across the aisles and check out the other shoppers while riding the escalators.)

Suspended above the “Place du Marché, a new restaurant called La Table de la Grande Epicerie is helmed by chef Jean-Jacques Massé, a Meilleur Ouvrier de France (MOF). Bathed in light, the restaurant is decorated with trees that soar to the high ceiling. And on the basement level, La Cave is a wine enthusiast’s dream, with a carefully curated selection of libations, including 2,000 wine references, along with the restaurant Balthazar.

France Today attended the inauguration soirée, where comedian Ariel Wizman stole the show as the DJ.  Set up amidst the fruits and vegetables, a band played Ravel’s Boléro, while the crowd (1,500 strong) gawked over a magical site: a parade of La Grande Epicerie’s artisans on the escalators. The maraîchers, wearing vegetables on their sleeves and hats, followed by the pâtissiers, the fromagers, the butchers, decorated in sausages, and the boulangers—all prized métiers deserving of the hearty applause from party guests including celebrities like actress Diane Kruger.

The Champagne was free-flowing, and the feast, featuring the country’s finest epicurean delights, was a decadent affair: oysters, foie gras, charcuterie, a chocolate fountain, tray after tray of specialty desserts, and ice cream pops dipped in chocolate and rolled in nuts right before your eyes. As guests departed, they were given La Grande Epicerie de Paris shopping bags, and instructed to choose their breakfast for the lendemain. Outside, a series of wooden carts doled out the goodies: fresh fruit juice, jam, croissants, yogurt, chocolate… The perfect finish to a memorable evening.