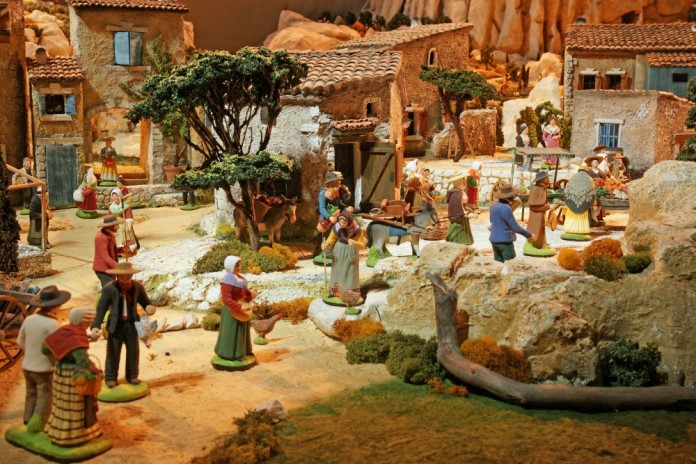 Christmas in France. It all begins with skinning a hare, right in the alley of a city market. When you see that, you know the holidays aren’t far away.

What does skinning a hare have to do with the holidays? Nothing directly. It means, though, that hunting season is full upon us, and when people take to forest and field, their rifles over their perfectly clad olive-green shoulders, it is the advent of the cold and the crisp, and the very special atmosphere that leads to Christmas. The leaves fall, the turkey and oysters must be ordered, the foie gras purchased and prepared.

Because I live in a rural area and know many farmers, vendors and hunters, I see the activity heat up as early as the end of October. Then, fishmongers already have notebooks in their pockets (and calculators in their brains) as they jot down Christmas oyster, clam, mussel, cockle, lobster and scallop orders. Farmers converse with customers about the availability of certain lettuces and squash, root vegetables and the all-important leek (any day in France without leeks is a sad one indeed). Hunters simply glow with pride as they go about their business.

Several special markets devoted solely to foie gras are on the calendar so the ambitious home cook can buy a fresh liver and make his or her own gorgeous, silken pâté, which must age to be good. One mustn’t be late to a foie gras market—they literally begin with a bell and the waiting crowd rushes in, going from stand to stand in search of the perfect specimen.

Along with all this procurement comes the vin chaud, that restorative hot wine scented with a bit of orange, a bit of cinnamon, some star anise and, who knows, a little coin of ginger. Served on street corners, from tents and market stands, in shops and restaurants throughout the land, it is as much a part of the holidays as Père Noël.

Thanks to Alsace and its Germanic traditions—redolent of sweet spices, lebkuchen (small, round honey-and-spice cakes) dipped in chocolate and other culinary delights—most Christmas markets in France do offer gingerbread cookies of some sort. This is where the resemblance with an American Christmas ends, however. While we—Americans—bake our own cookies and fruitcakes, order turkeys and roast beef, hang stockings and decorate the house, we—French—remain concerned with our shellfish and foie gras.

The focus of Christmas gastronomy here is December 24th. Then, families gather for a sumptuous meal and gifts. And when I say family, I mean just that. French Christmas is exclusive, as families knit themselves together in a closed circle around a laden table. There are rare times when the circle opens, and one of my favorite Christmas memories includes a midnight meal (this time, after Mass instead of before) with friends, where the main course was sea-fresh scallops in cream.

Each region has its own particular Christmas traditions, of course. Though I live in Normandy, my favorite Christmas Eve tradition is Provençal. There the rituals are rich and deep, and they begin long before Christmas. In the early fall, the Provençal grape-grower carefully selects perfect bunches and stores them in a cold spot, in straw. There they will stay until Christmas Eve, when they are served as part of the famed treize desserts, the thirteen desserts, which include a varied selection of dried local fruits, almond candies, fresh almonds, hazelnuts, walnuts and clementines. A special bread called pompe à l’huile is part of it, too—scented with orange-flower water and moistened with olive oil, it is a rustic delicacy.

The Provençal Christmas includes traditional decor, which is also planned in advance. My favorite touch is the clementine candle, made by carefully extracting the fruit sections, leaving the central stem intact. This is the wick; the hollow skin the glowing orange candle. Accompanying these fragrant torches on the table is a plate or bowl of sprouted wheat, which signifies hope for a good harvest in the coming year.

Dinner is “lean” which means there is no meat, and dishes include platters of seafood and garlic-laced gratins of Swiss chard. While there is no bûche de Noël (the Christmas cake in the form of a Yule log) among the traditional thirteen Provençal desserts, the tradition of the log itself is said to have originated in Provence. There, before the meal, the eldest and the youngest in the family take hold of a real log and set it on the fire in the chimney. They represent the old and the new, the past and the future. The fire is the energy that binds them.

My own Christmas traditions echo a blend of cultures. Like the Provençaux, I begin my preparations early, during quince season, when I make both quince jelly and diamond-shaped quince-paste candies. Soon after, I team up with a Swedish friend and, with our children, we construct gingerbread houses, gluing them together with icing, decorating them with fanciful French candies, peopling them with gingerbread figures, animals and trees.

I bake cookies, à l’Américaine, and distribute them to friends and neighbors. If I lived in Alsace I’d have competition, for the Alsatians are the only traditional Christmas cookie bakers in France. Here in my corner of Normandy, my efforts are unique. As for the bûche de Noël, I love to make it almost as much as I enjoy the cookie baking and gingerbread-house making. It’s simple and, once it’s frosted, I supply the meringue mushrooms dusted with cocoa and leave the children to the decoration. One year my son put teeny little cars on the bûche, in amongst the mushrooms and green icing sugar—a fanciful little Christmas traffic jam on a cake.

Christmas season for me means a party, too. I invite friends, the children’s favorite teachers, the neighbors who include the coiffeuses across the street and the épicier around the corner. Vin chaud is always on the menu—mine includes plenty of ginger!—along with appetizers like homemade pâtés and savory breads and a big platter of icy oysters, followed by plenty of Christmas cookies. The Christmas tree sparkles in the background at one end of the living room, while a fire crackles in the fireplace at the other.

About 3 tbsp slivered almonds, for garnish

Put all ingredients in a large saucepan over medium heat. Let the wine heat until it is giving off steam, stirring frequently to dissolve the sugar. When sugar is dissolved, lower heat and cook for 20 minutes. Remove it from the heat and let it sit. Ten minutes before you are ready to serve it, put 1 teaspoon of slivered almonds in each of 8 glasses. Reheat the wine until it is very warm, but not boiling. Divide it among the glasses and serve.

If you want a larger quantity, you may triple the amount of wine without increasing any of the spices except the ginger, which you’ll also want to triple. You’ll need to adjust the sugar according to taste.

Susan Herrmann Loomis teaches cooking classes in Normandy and Paris. www.onruetatin.com. She is the author of many award-winning books.

From the France Today magazine archives