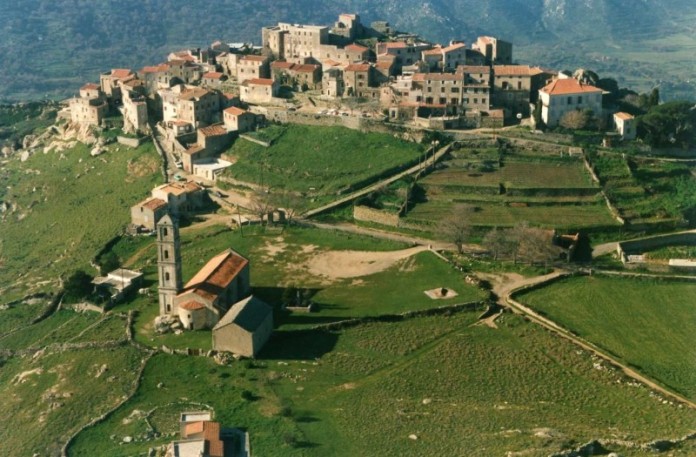 When celebrated French novelist Honoré de Balzac first visited the island of Corsica, he found himself seduced by the “French island basking in the Italian sun.” What he loved most, he told friends in long whimsical letters, were the stunning mountains, which reminded him of Switzerland, and its tranquil population, which he admired for its dolce far niente lifestyle.

Balzac was talking about the L’Ile de Beauté that he happened upon in 1838 while on a journey to its Italian neighbor Sardinia, which lies just 11 km (7 mi) away. But were he to happen upon Corsica again today, it’s more than likely he would fall for the same charms. Now those timeless qualities are attracting a new wave of foreigners who, once intoxicated by the sheer beauty and unique ambiance of the island, are deciding to stay on a more permanent basis.

Corsica, which has been part of France since 1768, is the fourth largest island in the Mediterranean-after Sicily, Sardinia and Cyprus. Situated 166 km (103 mi) off the southeastern coast of France (or le continent as the islanders call it), it is 183 km (114 mi) long and 80 km (50 mi) across at its widest point.

The birthplace of Napoleon Bonaparte, the island is steeped in history-the earliest traces of Corsican cave dwellers date to the pre-Neolithic era-and boasts some of the most beautiful medieval villages in France. It also offers some of the country’s most wild and varied scenery, including rugged mountains, long white sandy beaches and picturesque ports.

The island’s political history is almost as rocky as its much-lauded mountainous terrain, and certainly more talked about. Over the centuries Corsica has been invaded by Romans, Vandals, Goths, Saracens, Pisans and Genoans, among others. Led by revolutionary hero Pascal Paoli, it was independent for only 14 years in the mid-18th century, before reverting to France with the Treaty of Versailles. There is still a strong nationalist movement today, and while many oppose total autonomy for the region, a fervent minority of Corsicans continues to push for complete independence, as well as for the preservation of the Corsican language.

Historically the island’s population of 275,000 worked on the land, producing wine, citrus fruits, cheese, olive oil, honey, meat and fish. But over the last two decades there has been a huge escalation in the number of people vacationing on the island, making tourism its number one trade. More than two million plus visitors now come to Corsica each year.

With the rapid growth of tourism has come an unprecedented housing boom, which has put Corsica firmly on the map vis-à-vis the buy-to-rent investment market. With its four international airports and seven seaports, it is also becoming hugely popular-and viable-for foreigners looking for a holiday home in the sun.

Claire Hall is surprised the “Corsican appeal” has taken this long to reach the rest of the world. Hall moved from the south of England to Propriano, on Corsica’s southwest coast, three years ago, culminating a long and passionate affair with the “Scented Island”, as it is also known. Her work in the travel industry used to bring her to Corsica twice a year, and she found herself missing its wild scenery, wonderful weather and warm people so much that she decided to swap her village house near Eastbourne for an apartment with Mediterranean sea views.

She continues to work for the vacation rental company directCorsica, which has recently branched out into a property search consultancy, helping foreigners looking for property to find their dream home.  “I have been here on a more or less permanent basis for about three years now,” says Hall, “and I have no plans to return to England for the foreseeable future. The lifestyle is much nicer here. The climate is ideal, very much like that of the south of France. And for an island, it has exceptionally good transport links.”

From Paris, there are direct flights daily to all four of the island’s airports situated in Calvi and Bastia, in the north, Ajaccio in the southwest, and Figari in the south. There are also direct flights from the UK during the summer months. In addition, seven ports serve a number of ports in mainland France and Italy. It’s hard to believe, but true, that from any point on the island you are no more than an hour and a half from an airport or ferry port.

The island is split horizontally into two départements, Haute-Corse and Corse-du-Sud, both of which share a range of breathtaking snow-capped mountains that run down the horizontal spine of the country.

The most well-known area is the southeast coast, near the resort town and gulf of Porto Vecchio, where the white sandy beaches are on a par with the Caribbean. Prices in this fashionable area are by no means cheap-but in comparison to the French Riviera, to which it is frequently compared, they are extremely favorable.

The Antibes-based real estate agency Carlton International currently has two Corsican offerings in its portfolio of luxury properties concentrated mainly on the Côte d’Azur-highlighting the demand for prestigious villas on the island. One six-bedroom property just five minutes from Palombaggia, one of Corisca’s most beautiful beaches, is on the market for €790,000  ($1,231,000). A similar property on the French Riviera would cost around €5 million ($7.8 million)- a very reasonable price on this small piece of paradise.

Carlton International director Philip Weiser says most Corsican properties are at least 50 percent cheaper than counterparts on the Côte d’Azur, while much-coveted villas with “les pieds dans l’eau’” (feet in the water) are about one quarter of the Riviera price. “The value of real estate in Corsica is outstanding,” says Weiser, “and we are getting more and more inquiries from our clients for properties there. It’s a beautiful island, with all the qualities you expect from a Mediterranean region without the nuisance value.” The rental yield from buy-to-let properties was particularly appealing to his clients, Philip adds. “Our clients have predominantly been German and British. One English client who has already owns one rental property is currently looking for another two.”

Savvy investors Marianne Bosio and her husband Vincent, who live near Nice, recently bought a four-bedroom villa overlooking Porto Vecchio, which they plan to rent out this summer. The French couple snapped up the modern villa with an infinity swimming pool for €650,000 ($1 million) and expect to be able to ask in the region of €150 ($240) a day for the summer season.

Another area popular with foreigners is the southwest coast, which is less flashy than its western cousin but just as beautiful. “The coastline here is more rugged, and perhaps even more interesting,” says Claire Hall. “The sand is still golden but the beaches are smaller and set around the craggy coastline. You can find little coves that you might have all to yourself, even in the high season.”

Southwest prices are more appealing too, she adds. A luxury villa set in gardens with a pool, within walking distance of the beaches and the bustling town of Propriano, would set you back around €500,000 ($779,000). If you leave the coast and head for the hills, the potential for a bargain is even greater. Traditional granite stone villas within a 45-minute drive of the sea are currently commanding prices between €100,000-€200,000 ($155,000-$310,000).  And inland you will find the true Corsica, where time almost stands still.

Those looking for more action should head to the northwest region called La Balagne, known as the Garden of Corsica. The major town is Calvi, a vibrant resort with an imposing 15th-century citadel. The area is very popular with tourists, and Calvi’s permanent population of about 5,000 swells to some 65,000 in the summer season.

Accommodation here tends to be purpose-built, but most new builds have been carefully designed to fit in with the beautiful surroundings. “There is a large demand for holiday rentals in the area, so prices tend to be higher than they might be in the rest of France-with the exception of the Côte d’Azur,” says Hall. A one-bedroom apartment close to the sea here is currently on the market with London-based Lorraine Campbell Property Services for €126,000 ($196,000).

With such an influx of foreign investment, there is always the question of what the Corsicans themselves-a fiercely independent and reputedly insular race-think of their new neighbors. “There is a strong nationalist movement,” says Hall. “But I believe it’s very much personally motivated, not politically. It is at least 30 years since the last tourist was affected by the actions of the nationalists, and the local people really do seem to like the British and the Americans. They are not so keen on the French, however.”

“If you are willing to fully integrate in the society you will find your neighbors very warm and welcoming people,” she adds, concluding, like Balzac, that the island really is unique. “You get the best of both Italy and France.”

Originally published in the July/August 2008 issue of France Today.