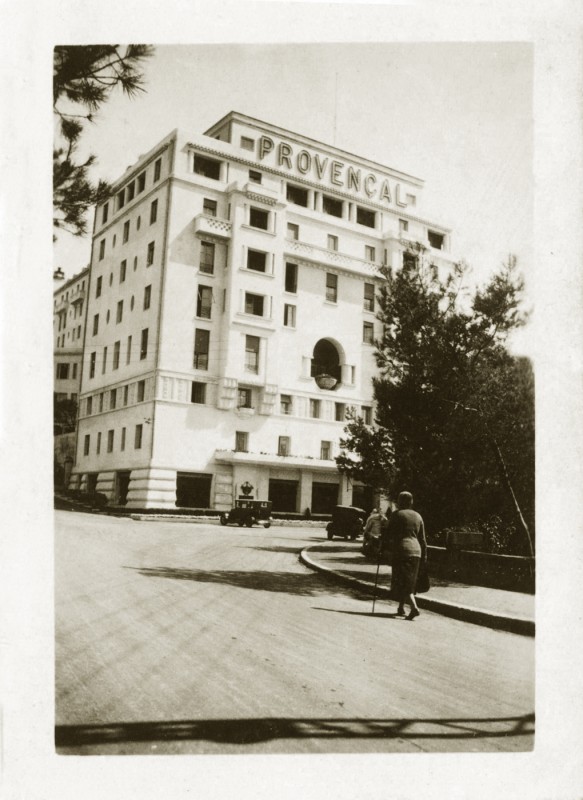 In its heyday, the magnificent Hôtel Le Provençal was the toast of the Côte d’Azur. The huge hotel’s stunning Art Deco architecture, along with its perfect location overlooking the Mediterranean, was a magnet for America’s great and good, and rich and famous, including Marilyn Monroe, Frank Sinatra and the Kennedys.

But for more than three decades the immense building has stood deserted, hidden behind unsightly, boarded-up windows-an eyesore in the otherwise glamorous Riviera resort of Juan-les-Pins, adjacent to Cap d’Antibes and about midway between Nice and Cannes. Towering above the elegant villas that line the seafront, the seemingly haunted building was a frequent talking point, for all the wrong reasons.

But after its long languish in limbo, Le Provençal is about to be put on the map again-transformed into an ultra-sophisticated residence of luxury apartments the likes of which most ordinary mortals can only envision in dreams.

The 290-room former hotel has been bought by English property developer Cyril Dennis, who lovingly refers to his latest project as “Sleeping Beauty, waiting for someone to breathe life into it again”. He intends to do just that, by converting the former Art Deco palace hotel into 56 state-of-the-art apartments whose owners will also have access to spas, private beaches, powerboats, tennis courts and a ski chalet. “Everything you ever dreamt of,” Dennis adds.

Le Provençal was built in 1926 by American millionaire Frank Jay Gould, the son of financier Jay Gould. At its opening the vast hotel, boasting a tennis club, restaurants and luxury suites, was considered terribly avant-garde, and signaled a whole new era on the Côte d’Azur. In those Roaring Twenties, foreigners, especially Americans-Gould and his socialite wife Florence, Scott and Zelda Fitzgerald, Gerald and Sara Murphy, Rudolph Valentino-flocked to the Riviera for its balmy summers and extravagant lifestyle, filling the beaches of Antibes and Juan-les-Pins with youth and glamour, fast cars, sloe gin and jazz. The palatial Le Provençal became hugely popular, first with that Lost Generation and later with the Hollywood crowd, gaining a reputation as the social “engine” of Juan-les-Pins, a place where the world’s glitterati flocked to party. At various times Charlie Chaplin, Winston Churchill and Ernest Hemingway propped up the hotel’s bar, which was an inspiration for Fitzgerald’s Tender is the Night.

Over the years Edith Piaf danced in Le Provençal’s ballroom, Coco Chanel and Marilyn Monroe are said to have lounged on the expansive terrace, and Ella Fitzgerald is remembered for having thrown open an upstairs window of the hotel to serenade the crowds in the streets below.

But by the 1970s its heyday was past, and in 1976 the grandiose hotel was shut for the last time. Its eccentric last owner, Parisianjeweler Alexandre Reza, decided to close Le Provençal for a complete makeover, but the refurbishment never happened and the building was left to fall into ruin.

Fast-forward 32 years and Le Provençal is slowly but surely coming back to life again. The weeds that not so long ago sprouted across the graffiti-covered building have been pulled down and the boards ripped away to reveal the stunning Art Deco facade, synonymous with all that was sexy and hip more than eight decades ago.

Le Provencal’s 21st-century reincarnation is intended to be the epitome of exclusivity. On completion, the residence will comprise 56 one- to five-bedroom apartments ranging from 80 square meters (860 sq ft) to 700 square meters (7,500 sq ft), all with superb views over the Mediterranean. Five penthouse suites will offer the ultimate in luxe, with their own private gardens, swimming pools and vast terraces with views of the pine forests to the east, the snow-capped peaks of the Alps to the north and the beaches of Juan-les-Pins to the south.

The Art Deco exterior of the former hotel will be spruced up but remain unchanged, while no expense is being spared to make the interior as up-to-date luxurious as possible. All bathrooms will have spa baths and kitchens are to be fitted with high-end equipment by brands such as Porsche and Armani Casa. Every apartment will also have access to a humidity-regulated wine cellar, a lounge with a golf simulator and an eight-seat cinema screening room.

And if golf or movies are not your thing, no problem. On buying an apartment at Le Provençal, new owners automatically become members of the building’s Optimum Club, which allows them to enjoy a whole gamut of luxury leisure pursuits: a private beach with two restaurants a stone’s throw from the buildings; a six-court tennis club; a nine-hole golf course in a pine forest valley in nearby Sophia Antipolis; an ultra modern private spa run by Deckleman; and rights to the use of the building’s helicopter, a 30-meter luxury yacht with skipper and crew, and a three-bedroom lodge in Courchevel (plus ski passes, bien sûr).

The ambitious Le Provençal project was launched two years ago by the Dennis family, who saw the crumbling building as the “last jewel in the Cap d’Antibes”, arguably the Cote d’Azur’s most expensive promontory, where one property recently sold for a reported €200 million.

Dennis, a British-born, Monaco-based property developer who made his fortune by investing in London’s Docklands in the 1980s, immediately saw the potential in “the building everybody talked about”, with its staggering 14,500 square meters (156,000 sq ft) set in four acres of gardens in an area of France where property prices have soared in recent years.

However, with a global recession looming, will the apartments’ predictably huge price tags be too high even for the stupendously wealthy? Studios in the complex start at €2 million with penthouses on the market for €40 million-plus annual service charges of around €178,000. Surprisingly, the astonishing prices don’t seem to be putting people off, according to sales agents Savills International, who say that 35 percent of the apartments have already been sold.

But if the mere thought of those prices is sending you into a spin, you need not worry. Although prices in this part of France are notoriously expensive, there are still plenty of bargains to be found in the neighborhood. A studio flat with a sea-view terrace and shared swimming pool is currently on the market with the real estate agency Choices Acquisitions for €176,000, and a 100-square-meter villa in need of some renovation is being offered by JJC International for €1,060,000.

Alternatively-and without any doubt the most affordable option-you could open a bottle of rosé wine, put on a bit of jazz and settle down with Tender is the Night. And before too long you’ll be hearing the cicadas and smelling the pines, just as if you were there.

Originally published in the December 2008 issue of France Today.