Yoga is all the rage not only in the United States but in Great Britain and now in France. There are yoga centers popping up everywhere in Paris. Classes are being offered in a wide range of venues and locations from a posh spa-like environment to free yoga classes in the Tuileries Garden. During the summer months you can get on your mats on the roof of BHV or the Maison Blanche. Both of these offer spectacular views of Paris.

The possibility of adding health benefits, relaxation and yoga to your vacation could be part of your next trip to France. I find the idea of beginning or ending a highly charged week of sight seeing with a retreat in yoga a perfect combination. This is particularly inviting if you will be based in Paris. Despite the many beautiful gardens in Paris, it is a big city and at the end of a week some sunny skies with organic food and gentle stretching is a great concept.

A friend sent me a website listing the yoga retreats being offered in France and it is quiet an impressive list. I immediately fell in love with the idea of spending quality time with like minded yogis in a quaint village far away from the hustle and bustle of my adopted city. Now that I have done it, I can see that this was a brilliant idea waiting to happen. You can also take this idea to seek out other retreats that may be better suited to your passion as running, biking, cooking or meditation. I even found a retreat on knitting and yoga and another on gardening and yoga.

The network of trains in France makes travel easy without the stress of an airport and security. The primary train stations are linked by the métro and Charles de Gaulle Airport so getting to your departure station is not difficult.

I began my journey from Gare Montparnasse where I was whisked south past lovely little villages and green pastures. I took a direct train to Bordeaux where I switched to a local train for the final 40 minutes of my journey to Porte Saint Marie. You can buy lunch on the train. However, I prefer stopping in my favorite boulangerie on my way to the station and coming on board with a picnic lunch and a good book.

At the end of my train trip, I was greeted by my host for the retreat, Tamsin Chubb. Within 15 minutes Tamsin had me installed in her lovely home, sitting in the garden with a cup of hot herbal tea and a hearty slice of homemade cake.

Tamsin came to this part of France in 2013 in search of quiet reflection. The magic of the region took hold and the idea of making this a yoga retreat was born. Tamsin came well prepared having spent the preceding years in training as a yoga teacher and then having worked in ashrams in India and France. Who better than Tamsin to open a haven of wellbeing by combining her love of cooking, yoga and nurturing.

There were five other woman who signed on for this retreat. We were of various ages and varied backgrounds. Our commonality was a passion for yoga and adventure. With such a small group of like minded woman we quickly bonded to enjoy fireside chats, healthy organic meals prepared by Tamsin, twice daily yoga workouts and daily excursions. All of this was mixed with a large dose of laughter.

Amelia Hodge was our yoga professor and daily coach. Amelia teaches Hatha Flow yoga in Bristol, England. She traveled to Southern India to gain her Yoga Alliance 200 hour Teacher Training Certification at the Sivananda ashram in Kerala under the guidance of Swami Govindanandan, Swami Tatwarupananda and Swami Nivedanananda. She continues to deepen her wisdom and self practice and was the perfect instructor for the retreat.

Our mornings began with an hour and a half of Hatha Flow yoga under Amelia’s guidance. This was followed by a substantial breakfast. One morning was porridge and a homemade apple with raisin compote while another morning was a large stack of buckwheat pancakes. Our last morning was a potato and onion tortilla. These breakfasts were accompanied by steaming cups of coffee, homemade jams, bread and organic juice.

Afternoon activities were diverse and included hiking in the forest to spending a morning at the local farmers market in nearby Nérac. This is a colourful market full of local producers where one can sample cheeses, foie gras and wine.

We had our main meal about 4:00 pm. Tamsin varied the choices from a hearty soup or baked vegetables and cheese followed by a yummy and filling vegetarian second course as moussaka or stuffed peppers. The days passed quickly and before we knew it we were preparing for our second Hatha Flow session around 7pm. Tamsin was determined that we would never be hungry and she would prepare a light dinner of soup and/or salad after our second yoga session.

At the end of our day the favorite meeting place was in front of the fire to chat, read or watch a film.

The time passed too rapidly and our little band of yogis were found packing their bags to return to their busy and varied lives refreshed and relaxed. What could be better than to begin or end your next travel adventure with a calming retreat?

[Namaste is used as a respectful form of greeting or goodbye which acknowledges and welcomes a relative, guest or stranger. It is Sanskrit in Hindi.]

Loui Franke is author of Parisian Postcards: Snapshots of Life in Paris. 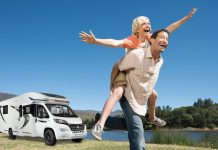 Top 5 Places in France to Visit on your Motorhome Holiday 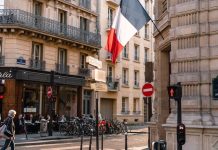