The French, in my experience, are either serious about walking or don’t walk anywhere at all. The local walkers I meet on the valley and mountain trails here in the French Pyrénées are weighed down with professional looking kit and give the impression that they could climb a mountain before breakfast – which is often exactly what they have done. We Brits, on the other hand, are somewhere in between; we love to walk but we generally prefer something more akin to a ramble, ideally consisting of a nice café en route and interspersed with frequent stops to admire the view and, of course, the perfect picnic spot next to a pretty river so we can cool our feet with a nice, soft meadow for a siesta after lunch.

Which is exactly why the gentle valleys and slopes of the foothills of the Pyrénées could have been made for us walkers for whom the journey is equally, if not more important, than the destination. The Alps may be bigger but they are not necessarily better when it comes to walking especially for those of us who see a walk as a pleasure rather than a challenge. The fact that the Pyrénées are on a smaller scale means that there is usually a café, lake or river not too far away and, for longer walking trips, you can start and end most days in typically French small towns or villages, ideal for an overnight stop with good value restaurants devoted to restorative local food and drink.

The Pyrénées offer all that is best in walking: fantastic scenery, great places to stay, good weather and, above all, variety. Serious trekkers will relish the chance to seek out the unexplored valleys of the high mountains while those who prefer an easier pace can stay closer to civilisation, enjoying the culture and history of the area through which they are walking. Moreover, unlike in England, I have never yet come across an angry landowner telling me that I am trespassing. 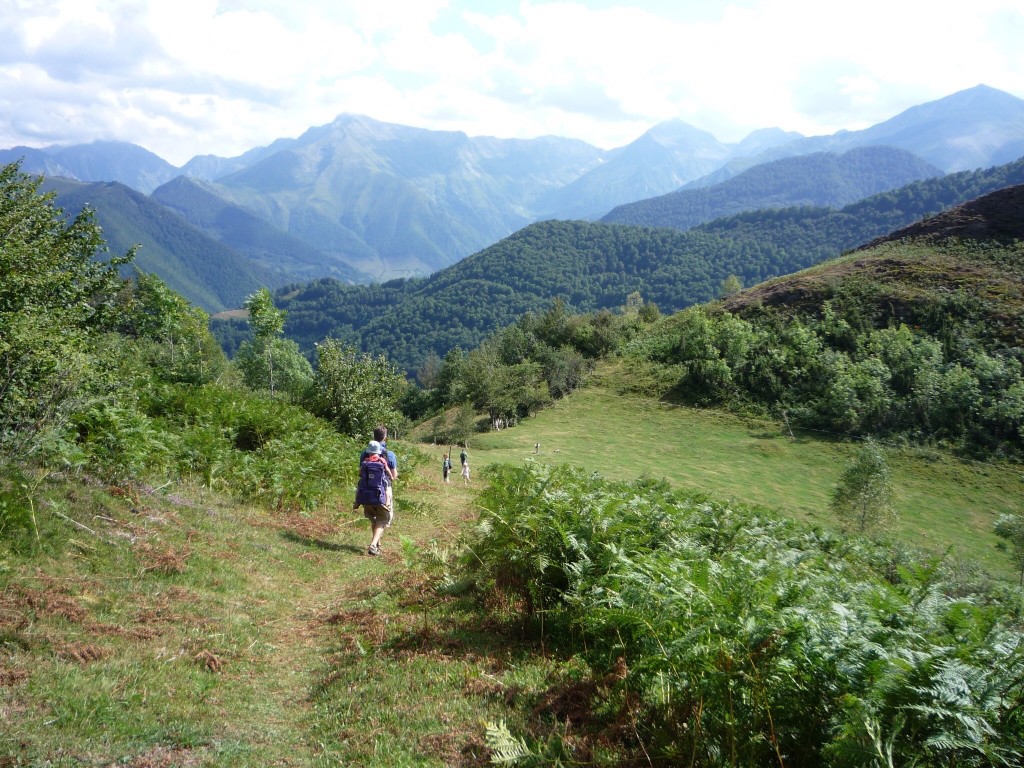 Even on gentle walks here, there are some staggeringly beautiful ascents and descents which are rewarded with magnificent views and, if you are lucky, sightings of birds of prey. This part of the Pyrénées is an important migration route for millions of raptors and other birds as they fly north in spring for the northern summer and south in autumn for the winter. The autumn migrations start in mid-August, beginning with black kites and honey buzzards, followed by black storks, ospreys, hobbys and marsh harriers in September, then red kites, buzzards and sparrow hawks in October. The Pyrénées are also a sanctuary for many animal and plant species which are now very rare or extinct in most other parts of Europe including the brown bear which has been re-naturalised (not without some objection on the part of local farmers) and the lynx. There are 400 species of flowers here, including the famous Pyrenean lily. The pastures in the valleys and higher up in the mountains are full of wild-flowers, a testament to the tradition of organic farming in the area where spraying chemicals has never been adopted as it has in many other parts of the world.

All the major walking routes and many minor ones have been marked throughout the Pyrénées and the mountains are laced with footpaths used by inhabitants for centuries. The best known, long-distance walking trail in the Pyrénées – and arguably the best long walk in Europe – is the GR10 (Grande Randonnée) which runs the whole length of the Pyrénéan chain from the Atlantic to the Mediterranean. It combines farm tracks, ancient pilgrimage trails, village lanes and steep ledges. It is marked for its entire 500-mile course by red and white painted horizontal bars, in a precise size and style specified by the French equivalent of the Ramblers’ Association. All along the track, individuals are assigned the task of painting these symbols on trees, rocks or telegraph poles – and maintaining them – some more diligently than others, hence a map and compass are still vital but it is always a comfort to spot the next mark and a great motivational game for flagging children when we undertake smaller sections of this walk.

Families will find that many routes are quite suitable for young children. There are numerous walks which are graded as family friendly and are not strenuous but have enough variation in terrain and natural features like waterfalls, rivers, crumbling shepherd’s huts and outcroppings to interest both adults and children. Also popular is to hire a donkey or two which allows families with small children to enjoy longer walks than they might otherwise manage.

For history buffs, it is possible to follow the medieval pilgrim route to St Jacques de Compostela and stay in the traditional stop-off points like the pretty town of Saint Lizier in the Ariège, listed as one of the most beautiful villages in France. Or the historical route of the Chemin de la Liberté [1]from Saint Girons, which was one of the secret escape routes into Spain, used by resistance fighters, refugees and stranded allied airmen during the Second World War. For those looking for shorter excursions, there are numerous, lovely day walks up to the many pristine mountain lakes and waterfalls or along the river valleys with their spectacular backdrop of snow capped mountains. Also in the region is the 9000-hectare Réserve du Mont Valier, one of the oldest in the Pyrénées with deep valleys, spectacular views and a huge variety of animal and bird species.

If there is a better place than the Pyrénées in which to go walking, I certainly have not found it yet.

Nadia Jordan [2] runs Foothills of France, a property search service in the Midi-Pyreneeswww.foothillsoffrance.com [3] and is a licensed search agent within The French Property Finders