Should you ever spot a golfer with his flies undone and his most personal of golf clubs exposed for all to see, do not be alarmed. There’s an unofficial rule in British club golf which states that if a man’s drive fails to reach the ladies’ tee (normally just a few metres in front), he has to play the rest of the hole with his trousers and pants undone. It’s known colloquially as a “plonker”.

French golfers don’t go in for sporting humiliation quite like we Brits do. On the other side of the Channel, the forfeit for not reaching the ladies’ tee is to buy all the drinks at the end of the round. They call it a “chiquette”.

The cultural difference is perhaps all down to the history of the sport. Here in the UK we have been striking little white balls since the 15th Century, while in France golf didn’t really take off until the 20th Century. We Brits have had centuries to dream up dozens of quirky regulations. In France, on the other hand, as everyone knows, rules and regulations are there simply to be broken.

“The French always go against what the law is,” jokes Paul Armandary, an Englishman who now lives in Brittany. “Cheating at golf is a French speciality. In any case, there are very few members’ golf clubs in France – most of them are municipal. This means the sport is much more casual than in Britain. Golfers are much more laid back when it comes to the rules and etiquette. That’s why you see people playing in jeans, which you’d never see in Britain.”

According to the Federation Française de Golf there are 563 golf clubs in France, serving 387,000 licensed players. (Compare that to Britain where just under 1.2 million players have access to over 2,500 courses.) In the 1980s the sport benefited from a massive expansion programme which saw around 350 courses constructed in 10 years, often thanks to government tax breaks for farmland converted to leisure use. The greatest number of golf courses in France (by a fairly lengthy drive) is found in the Rhône-Alpes region, followed by Provence-Alpes-Côte d’Azur, Aquitaine, île de France, Midi-Pyrénées and Brittany.

It’s in the latter region that I enjoy my baptism of fire into French golf. A self-confessed hacker, I’m slightly nervous as I drive off from the first tee at one of Brittany’s more upmarket clubs – the St-Malo Hotel Golf and Country Club. It’s a beautiful establishment, with an 18- and a nine-hole course, all carved out of the Mesnil Forest, its fairways and greens as expertly manicured as you would expect.

All of which make things especially embarrassing on the sixth tee where I manage to lob four balls, one after the other, straight into the lake. I quickly realise that instead of trying to drive across the water, I’d actually have posted a better score had I simply putted across the footbridge. Fortunately my shame is very short-lived.

Just as we reach the seventh – an intimidating beast at 433 metres and par 5 – the heavens open and we’re forced to run back to the clubhouse for shelter. Never have I been more glad that rain stopped play.

That evening, the club’s general manager, Philip Petersson, explains how golf can be a much more welcoming sport for beginners in France than it is in the UK. “In general, it’s really relaxed,” he says, loosening the buttons on his shirt. “You don’t get snobby clubs like you do in Britain. A few French clubs, especially where you get lots of members who come from Paris, are quite posh. But I’d say you could count on one hand the number of clubs that are really snobbish.”

This will be welcome news for the federation, based in the suburbs of Paris, which is doing it’s best to democratise the sport. Their research shows that the number of youngsters joining the sport is on the rise, with nearly 10,000 girls, and over 30,000 boys under the age of 18 played golf regularly, comprising 11 per cent of the golfing population as a whole. The demographics are changing, too. While golf used to be very much a sport for the haute-bourgeoisie, nowadays, according to the federation, almost a quarter earn less than 30,000 euros a year.

“Our sport is becoming more democratic,” the federation claims. “The promotional golf activity we organise [this includes free taster sessions and mentor programmes for females] has been really successful with more and more people, notably women and youngsters. Our best professionals regularly flirt with the sport’s world elite, the number of licensed players keeps rising, and the cost of the sport is dropping.”

Not everyone is so optimistic. The day after my water hazard debacle at St-Malo, I head off to Pléneuf-Val-André where the town’s superb golf course is warming up to host a Challenge Tour event – the second tier of the professional game in Europe. In the clubhouse, perched on cliffs above the Côtes d’Armor, a young French pro called Julien Xanthopoulos is happy to share his opinions on his chosen occupation.

“Golf is more snobbish in France than in England,” he says, which seems to go against everything I’ve been hearing so far. “There are more young players in your country,” he adds. “In France when you tell someone you are a golfer they automatically think you are rich, preppie, right wing and narrow-minded.”

But Xanthopoulos does concede that the times they are a-changing. “The federation has had to make golf cheaper and more accessible,” he says. “The media image of the sport means that more young players are coming into the game.”

While France lacks the golfing superstars that we in the UK regularly see on TV – such as Lee Westwood, Ian Poulter and good old Monty – nevertheless the Frogs aren’t exactly stumbling around between the bunkers and the rough. Xanthopoulos is at the very bottom of a pyramid of French professionals, top of which are Gregory Havret (167 in the world), Gregory Bourdy (170) and Thomas Levet (112). The women, meanwhile, have Gwladys Nocera at world No.100 and Karine Icher at 178.

Perhaps the most famous French golfer from recent years is Jean Van de Velde who famously snatched defeat from the jaws of victory at the 1999 Open Championship in Carnoustie, in Scotland. Arriving at the final hole as the clear leader, he had a six-shot margin to finish his round and become the first Frenchman for nearly a century to win this prestigious tournament. So what does he do? He dumps his ball into the river and then proceeds to remove his shoes and socks before wading in to inspect how it lies. This monumental cock-up cost him the trophy.

“That’s the sort of golf I might play,” I mutter to my partners at the next Brittany course we visit, as I limber up for the first tee. It’s a wonderful old club, built in 1887, called Dinard Golf, just west of the town of the same name. A links course, it hugs the rocky coastline, its 18 holes winding in and out of dunes, gorse bushes and fir trees. With its classic art deco clubhouse, added in the 1920s, it’s the second oldest club in continental Europe (the oldest, from 1856, is actually down in Pau, near the Pyrenees) and combines stunning beach views with Victorian charm.

Imagine my horror, then, when on the fourth hole – a 461-metre, par 5 dog-leg – I top my tee shot, and see my ball stutter along just a few feet, before it stops well short of the ladies’ tee. “Thank God I’m in France,” I say to my partners. “Now I just have to buy you all a drink at the 19th hole. If I was back home in Britain, right now I’d be unzipping my trousers.” 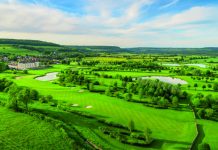 Ryding High: A Look at French Golf as the Ryder Cup Heads to France 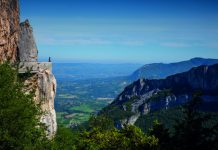