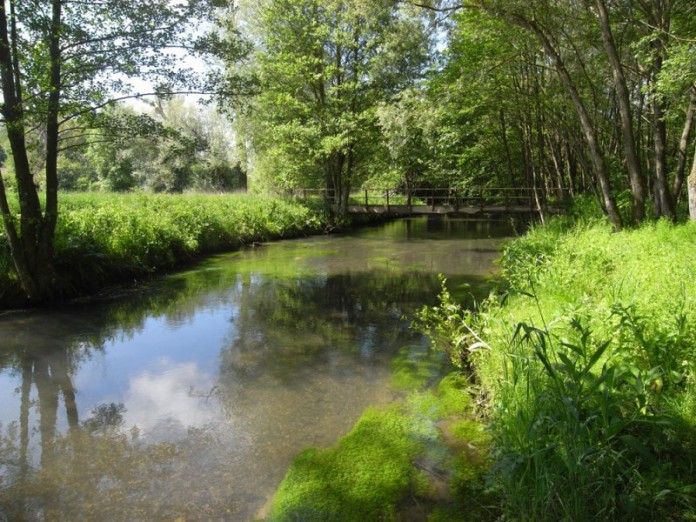 It was mid-September and the trout season was nearing its close as we meandered our way by car from Paris in the latest chapter of an occasional, personal quest to combine fly fishing, food and pampered luxury. When we reached the Manoir de Malvoisine, in the sun-dappled Normandy countryside about a half-hour’s drive northeast of Rouen, it seemed we had come close to finding it.

Rising over the fabled River Andelle–in another era a haunt of Ernest Hemingway and hotelier Charles Ritz–the Manoir is run by an English couple, Hedy Cleaver and Adrian Thompson. They had been living on the Isle of Man before they took over the centuries-old manor house here in 2006, and since then they have completed a remarkable renovation of the buildings and, from an angling perspective, of the river. They have also devised an iconoclastic form of management to run the business they opened in 2009. It works like this: if you and your party book any of the four guest rooms available on the upper floors, you get to have exclusive use of the whole place–including their one-mile private beat on the Andelle–for the period of your stay.

It’s like being baron for a day, princeling for a weekend. And it helps very much if you are a fly fisher enamored of pursuing wild brown trout in clear water that gives all the advantage to the quarry, including mandatory catch-and-release and the preferred use of barbless hooks.

Normandy is the heart of French chalkstream fishing, set in countryside so reminiscent of Hampshire across the Channel in England that it is easy to imagine some distant geological time when the two were part of one landmass. On the Norman side, rivers including the Avre, the Touques, the Risle and the Iton glide their gentle ways to the sea, within easy reach of such attractions as Monet’s gardens at Giverny, the D-Day landing beaches, Bayeux with its unique tapestry and busy seaside towns where it seems almost churlish not to partake of the oysters and freshly caught sea fish on most menus.

Normandy, too, is where foodies feast on cheeses such as Camembert and Pont l’Evêque, where apple orchards produce fine ciders and fiery Calvados. It is difficult, indeed, not to find two of the targets of our three-fold quest-fishing and food-simply by getting into the car and driving.

Before our visit to the Manoir de Malvoisine, we had spent time in Honfleur and in Deauville, known for its beaches and boardwalk, horse racing and yearling sales, whose casino was said to have been the inspiration for Ian Fleming’s original Casino Royale. At Nonancourt, a friend had offered barbecued sausage, local cheeses and fly fishing on his stretch of the Avre-replete with trout, grayling, the occasional chub (the French name chevesne sounds so much more poetic) and some ferociously territorial swans that did not take kindly to a wading intruder with a fly rod.

But we had not anticipated what we found at the Manoir de Malvoisine, after navigating our way through the small villages of Morville-sur-Andelle and Le Héron. We started by chatting with the owners in a sunlit corner of the grounds over a pot of tea-a very English way to pass the time in France-and listening to the story of the manor, accompanied by a chorus of birdsong. In the distance we heard the popping of shotguns and the barking of dogs-not unusual in a part of the world where hunting is common.

“Adrian had been planning to run furniture-making courses,” said Hedy, a university academic. “So we were looking for somewhere with a large workshop. There had to be some kind of income.”

“We wanted a project, so the more tumbledown, the better,” said Adrian, a marine architect and designer. “We were looking for something with history.” They looked for five years. Finally, they found Malvoisine. The previous owner, a Belgian prince, had resolved, with some reluctance, to sell.

It certainly had a claim on history. “Malvoisine is a fortified manoir with a long and tumultuous history,” as is noted on its website. “Its appearance would suggest little has changed since the 12th century when it was first mentioned as a Fief de Haubert connected to the King of France.” In the 16th century, French Huguenots took refuge from persecution at Malvoisine. The name translates as Bad Neighbor, meaning, the owners say, that it had been surrounded by enemies.

A more recent historical footnote comes from a name carved near the gatehouse-Schultz, for Charles Schulz, the American cartoonist and creator of Peanuts, who was billeted at the manor after the D-Day landings on June 6, 1944. And also after the D-Day landings, according to French fishing lore, the Andelle River, not too far away from Malvoisine, was the venue for secret encounters between Churchill and Eisenhower-fly fishers both.

All in all, the story of Malvoisine has a flavor of Peter Mayle’s Toujours Provence, with overtones of The Compleat Angler and a goodly injection of old-fashioned English eccentricity.

Some figures provided an indication of the challenges the Thompsons faced. The manor house nestles in an estate of some 90 acres, some of it woodland dense with alders, willow, oak, ash and poplar trees. The beat of the river needed fencing from cattle, and the banks required opening up to allow fishing. Using a chain saw and a tractor, the couple cleared over 300 trees from the banks. To restore the perimeter walls, they replaced the oak frames supporting 17,000 tiles, aided by visiting friends from the Isle of Man. “This is my fulltime job,” Adrian said. “I’m the groundsman, really.”

For the river itself, they took advice from the Wild Trout Trust, a British nonprofit, and the somewhat posh International Fario Club, founded by Charles Ritz, which runs an exclusive fishing beat downstream from Malvoisine. The river is classified as Category 1, meaning swimming and canoeing are prohibited. There’s no stocking of fish, so the river relies on the reproductive capacities of its shy and skittish wild trout. The number of anglers at any one time is restricted to four. During our visit, I had the stream to myself.

After tea we walked the beat, heading first downstream onto a small wooded island where the couple have now erected a tower-like folly, which anglers can climb up to spot the whereabouts of rising trout. Later this year, the Thompsons plan to open up the beat upstream from the manor house where overhanging trees prevent casting from the bank. The beat is linked by bridges, and there is no restriction on wading for those who prefer that approach.

The river is a legend among French fly fishers. In his authoritative A Fly Fisher’s Life, Charles Ritz (1891-1976)-whose family ran the equally legendary Hôtel Ritz in the Place Vendôme in Paris-identifies the Andelle as the river on which he first tried to catch a fish with an artificial fly. The book is a magisterial compendium of fly-casting technique, equipment and other wisdom. “Fly rods are like women,” Ritz advises, with no regard for subsequent subtleties of gender politics. “They won’t play if they are maltreated.”

He cautions against using the kind of short rod favored by some wading anglers on narrow streams like this stretch of the Andelle. “My dear friend Prinz Paul von Quadt fished with such a rod on the Andelle during the mayfly season,” Ritz recalls with casual hauteur, “and hooked the fly into his right eyelid.”

I used a nine-foot, two-piece La Loue carbon fiber rod by Pezon et Michel that I had purchased some years earlier and rarely used. But, coming from a renowned French rod-maker, it seemed appropriate to deploy it on the Andelle, coupled with a double-taper, four-weight line and a three-pound-test leader. My all-purpose fly on a new stretch of waters is a Gray Wulff, a pattern that an Italian angling friend, Paolo Bordoni, called a cacciatore-a hunter.

I fished all afternoon that first day. I caught nothing, but I knew from the few rises I saw and the occasional interest in my fly where a fish might be lying, not in some secret corner of the river but in full view of the manoir across a manicured lawn. A more zealous angler than I might have placed the late evening rise ahead of the glass of champagne on offer in the manoir’s baronial dining hall. But the temptation was too strong. I laid my fly rod in the racks provided and retreated to the manor.

We had been given a room under the eaves on the top floor with a small window looking onto the woodlands and the gardens and orchards planted with peach, apple and apricot trees, vines, raspberries and strawberries.

Down below, our hosts had stoked up a fireplace with huge logs and laid out the long 12-seater dining table for just the four of us. “One of the joys for us,” Adrian said, “has been meeting some really lovely people, people you wouldn’t normally bump into.” His wife added: “We have had nobody we did not like. What we are trying to say is: You are not in a hotel. This is your home while you are here.” Indeed, in my notebook diary, I had recorded “a remarkable sense of meeting up at a dinner party with people you got on with, and chatting freely.” Dinner was a four-course, home-cooked affair of fish cakes with spinach, lamb with dauphinois potatoes, cheeses and panna cotta with berries from the gardens underneath our window.

I would probably have happily left without catching a fish, but early the next morning, with the mists still covering the stream, I slipped out to look again at the Andelle, returning finally to the lawned area where I had seen the telltale rings of a trout feeding. I switched flies, trying a Tup’s Indispensable-a confection of pink and white-on a small hook. I cast upstream, but nothing showed interest. By this time, I figured I would go home fishless. Then, slightly downstream, I saw out of the corner of my eye the rings of another rise. On the banks, there was a seating arrangement made of thick, chopped logs. I perched there and tied on a #16 Gray Wulff, taking care to press down the barb with a pair of pliers. Then I moved downstream and waited. Sure enough, a trout was feeding. Used to the sensitivities of anglers at such moments of high tension, my wife, Sue Cullinan, approached on tiptoe to tell me breakfast was served.

“This is my last cast,” I replied, repeating one of the great lies of fly fishing.

I cast. The trout rose. And the rest is history, recorded in the Manoir de Malvoisine catch-book which, by some technological miracle, is now visible on its website.

Gourmetfly.com Day-trip fishing with picnics on the banks of Normandy streams website 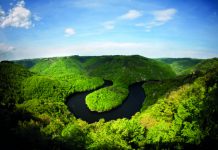 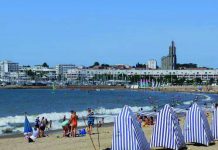 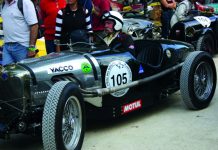 Things to See and Do in Les Deux Charentes