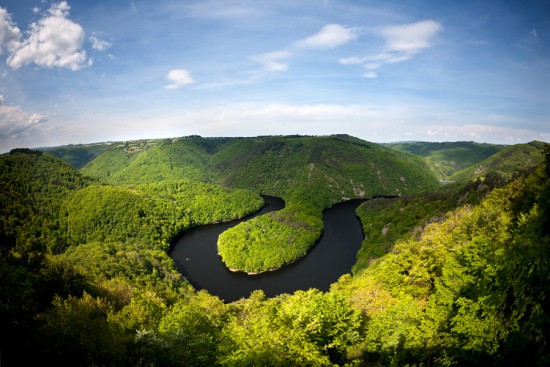 I swear the peacock just tried to peck me. He’s a beautiful chap, showing off his plumage at every opportunity, but stray too close and he verges on the aggressive.

There’s no doubt he’s king of this farmyard. George Orwell would have labelled him “more equal than the others”. His farmyard colleagues – goats, chickens, sheep, donkeys and ponies – couldn’t be more laid back. Hardly surprisingly given the summer heat and the chilled rural location.

We’re staying at Les Gîtes du Berger, a remote and gorgeously pretty farm gîte in the valley of the River Sioule, in western Auvergne, not far from Clermont-Ferrand. With me are my wife and two young daughters. The latter are happy to spend most of the week pestering the farmyard animals. But they know not to mess with the peacock.

It’s the perfect setting for a family holiday. In the other farm gîtes are a French couple with a baby, a Belgian family and some Luxemburgers. Having endured fairly hectic family holidays in the past, my mission is to see if the bucolic location might make for a more relaxed break.

Every mealtime – except once during a rainstorm –we eat al fresco, looking east across the valley. The view is perfect and uninterrupted. No pylons or motorways round here. First of all your eyes take in a vast sweep of wildflowers planted in the gîte’s meadow. As the valley descends towards the river, arable fields give way to woodland. On the far side of the valley you can clearly see several volcanoes.

Yes, volcanoes. This is the Parc Naturel Régional des Volcans d’Auvergne, or Parc des Volcans, for short. Stretching 1,500 square miles along the backbone of the Auvergne, it boasts scores of inactive volcanoes. A few rise high above the Massif Central, some are the classic conical shape with craters gouged out of them, and others are little more than hillocks. 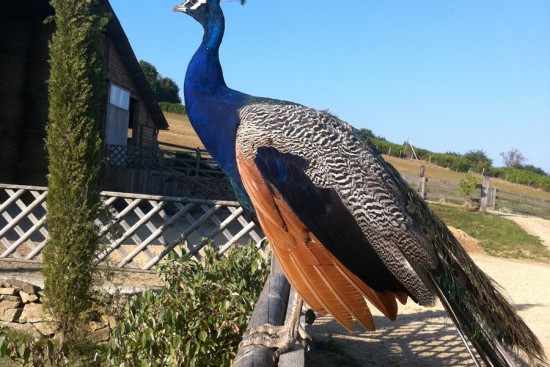 At first my children are worried an eruption might cover them with burning lava and molten ash. “They’ve been dormant for 5,000 years,” I tell them confidently.” The holiday isn’t totally eruption-free, however. One evening we are invited to watch a live show at Volcan de Lemptégy, an outdoor theatre hewn out of the side of an old volcano. Complete with laser lighting, pyrotechnics and fireworks, the show is an uber-kitsch fairytale about demons, explorers and princesses. The kids appreciate it a lot more than I do.

Most days we cool off from the summer heat by swimming in a nearby lake – the Gour de Tazenat, so perfectly round that it has to be a former volcano crater. Anyone who’s enjoyed lake swimming in France will know what a dignified experience it can be. None of the sludge, litter and shopping trolleys you get in certain other European countries. The French treat their lakes like their Riviera beaches, keeping them safe and spotlessly clean. Often they’ve trucked in lorry-loads of sand and spread it along the shore to create a beach. At another lake near us they had even cordoned off a safe swimming area and appointed lifeguards to keep an eye on the children. Which, of course, made it all the more relaxing for my wife and me, enabling us both to indulge in a bit of holiday reading. I’d brought along a copy of that famous childcare book French Children Don’t Throw Food, determined to find out why French kids seem to be so much better behaved on holiday than their Anglo-Saxon counterparts.

If you have young kids and you’ve never come across this book before, then get yourself a copy. By American writer Pamela Druckerman, it expounds the virtues of parenting à la francaise and rejects the obsessive, “labour-intensive and exhausting” Anglo-Saxon style of helicopter parenting.

During my week in Auvergne, I spend many an hour sunbathing by the lake and absorbing Druckerman’s advice. An American who married a Brit and moved to Paris, she studies Rousseau-style childcare philosophy, and discovers “there’s something about the way the French do parenting that makes it less of a grind and more of a pleasure”. She doles out no-nonsense Gallic advice such as the need to teach children to eat proper meals with adults from a young age. (My wife and I try that up until the second evening of our holiday when dinner turns into a food fight.) She stresses the importance of teaching kids to play alone. (Fortunately there are so many animals in our gîte farmyard that my daughters are never alone.) She realises that French children rarely interrupt adult conversation, unlike their English and American counterparts. (I don’t complete that particular chapter as my eldest rudely demands I go swimming with her.) She notices how the French ensure their children wait for treats and learn that whining never works. (The afternoon I read this particular chapter my daughters have to twiddle their thumbs for at least three minutes before I buy them an ice cream.) And she realises how crucial it is that children are taught how to deal with frustration. “French parents don’t worry that they’re going to damage their kids by frustrating them,” she writes. “On the contrary, they think their kids will be damaged if they can’t cope with frustration. They treat coping with frustration as a core life skill.” (After that chapter I tell my daughters that ice cream is off the menu altogether. They stare daggers at me.) 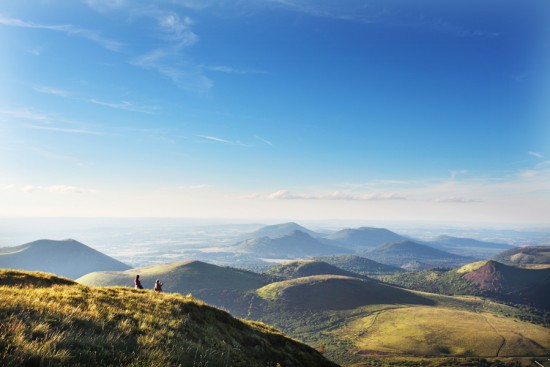 Yet, by the end of the week, after administering some of Druckerman’s advice, I notice subtle improvements in my daughters’ behaviour. They are playing delightfully with the Francophone children staying in the other gîtes. They are sharing breakfast and lunch with us (we haven’t yet progressed to dinner) and managing to transfer food from plate to mouth without mishap. They are still rising at the break of dawn each day but, instead of waking us from our slumber, they head for the henhouse to see if they can find any eggs. And they are talking in pidgin French to Bernard and Christine, the delightful owners of the gîte.

Bernard was brought up on this farm – his mother still occupies the main house. Christine is originally from Paris and moved to the Auvergne, attracted by the monumentally more chilled lifestyle. When they’re not running the gîtes, or pacifying the local peacock, they work the surrounding (predominantly) sheep farm. Bernard and Christine encourage us to visit the local area. One afternoon, on their recommendation, we head off for the Méandre de Queuille, expecting nothing much more than a little meander in the local river. How wrong we are. This natural wonder – an enormous oxbow lake in the making – sees the River Sioule creating a huge teardrop-shaped kink as it passes through western Auvergne. As you admire it from a cliff hundreds of feet above, it seems to defy logic. Why would a flowing river almost create a circle as it meanders through the valley?

The following day we all ascend Puy de Dôme, the dominant volcano here, over 4,800 feet above sea level. But, with kids in tow, we don’t do it the hard way on foot. Instead we take the very convenient Panoramique des Dômes railway. Operational since 2012, this rack railway winds three miles from the base of the volcano to the summit. Efficient and immaculately clean, it has huge stations at both ends – better than most you’d find on the Paris Métro – and can transport up to 1,200 passengers an hour. 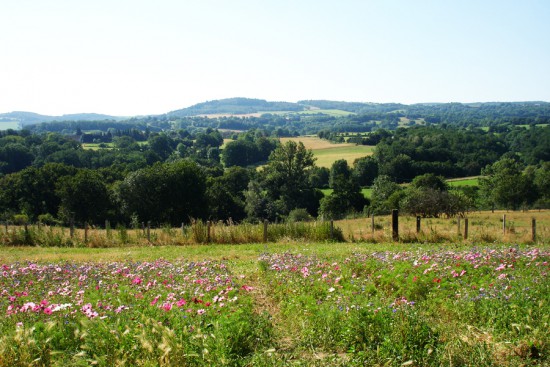 Spilling out at the top with all the other holidaymakers, we walk the final few metres to the peak. Here is where some of France’s keenest paragliders like to show off their skills. With steep take-off points, and summer thermals rising up the side of the volcano, it’s perfect for this sport. My family and I spend a good hour watching them glide gracefully about the mountain top and out across the surrounding countryside. It’s the perfect afternoon, bright sunshine with a cool mountain breeze taking the heat off the day.

Back at the gîte that evening, the pesky peacock tries again to peck me. His beak even connects with the skin of my leg. But, by this stage, I’m so relaxed, I really don’t care.