Even in the midst of World Cup fever (Allez les bleus!), excitement is building for the Tour de France, which starts on July 5 in Yorkshire. As we reported back in October, the 2014 course will commemorate the centenary of WWI, its course tracing the battlefield sites along the Western Front from Ypres, Belgium to the Swiss border near Mulhouse.

It was 100 years ago (June 28, 1914) when the cyclists racing in the 12th Tour de France departed Paris; a few hours later, the warning shot rang out across Europe when Archduke Franz Ferdinand was assassinated, triggering a sequence of events that led to World War I. “The war to end all wars” defined the modern era like nothing else. To quote The New York Times: “It demolished empires and destroyed kings, kaisers, and sultans. It introduced chemical weapons and aerial bombing. It brought women into the work force and hastened their legal right to vote.”

During the Great War, nine million combatants were killed including three Tour de France champions, who died in the fighting.

In a carefully mapped out course, this year’s three-week race will pay homage to those who lost their lives. The cyclists will pass important war memorials like Menin Gate near “Flanders Fields”; military cemeteries like Notre-Dame-de-Lorette, the largest in France; and battlefields like Verdun and the Chemin des Dames. The landscape, once a desolate wasteland of craters and muddy trenches, is now verdant and green with vegetation, though the earth is still scarred, pocked with holes from artillery shells and bombs.

For history buffs keen to learn more about World War I, France Media Group has published a special edition publication for the centenary. Find out more. 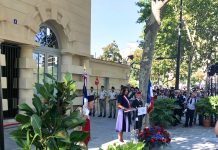 A Remarkable Chronicle of Paris at War