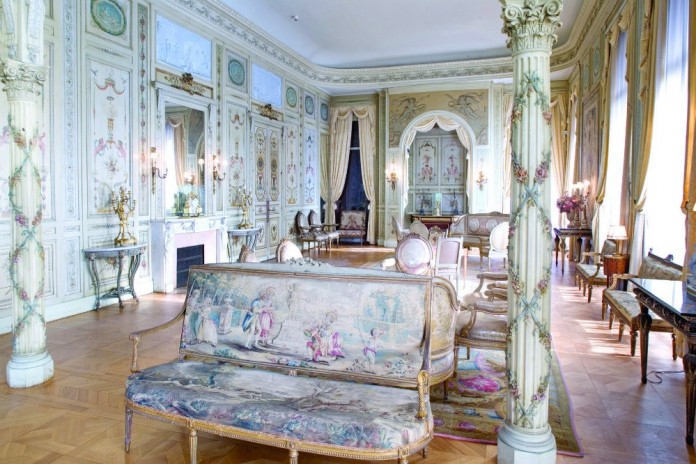 The stunningly beautiful peninsula of Cap Ferrat, which lies between Monte Carlo and Nice, contains some of the most expensive real estate in the world. However, this is no sterile gated community – in fact, it’s surprisingly accessible. You can drive right around the Cap, visit the charming port of Saint-Jean, then stop for a swim or walk the headland, where you can glimpse the manicured lawns and cypress avenues of magnificent villas, which range in architectural style from ultra modern to Italianate and Belle Époque. Of course, glimpses are all you see – unsurprisingly, the walls are high and security is tight around the summer homes of their über-rich proprietors. But who needs to ogle these expensive properties when, for just a few euros, you can spend all day visiting the most exquisite villa of all, the Villa Ephrussi-de-Rothschild at Saint-Jean-Cap-Ferrat?

Fortunately for us, when Béatrice Ephrussi-de- Rothschild died in 1934, at the age of 70, she had the generosity of heart to bequeath her creation, which is situated on an unmatchably picturesque and dramatic hill-top location, to the French Academy of Beaux Arts. We can only wonder how many of today’s super wealthy villa owners would make such a gesture…

To visit the Villa Ephrussi today is to be seduced by the sheer charm and romance of the house and gardens. Beautifully maintained by Culturespaces, the property is an extravagant testimony to the extraordinarily wide-ranging tastes and ambitions of châtelaine Béatrice.

Born in 1864 in Paris, into one of the wealthiest banking dynasties in the world, Béatrice grew up at the Rothschild’s Château de Ferrières surrounded by the kind of art, beauty and wealth that is simply hard to imagine. Béatrice’s father, Alphonse James, was one of five Rothschild sons sent to the capital cities of Europe in the 1800s, to expand the famous German banking dynasty. The monumental ambition of the dynasty wasn’t confined to the male offspring – when Béatrice married, aged just 19, it was to Maurice Ephrussi, a Russian born banker. While perhaps not on the same scale as the Rothschild empire, nevertheless, the Ephrussi family were equally determined to build a powerful and influential network that extended well beyond the Russian Empire port of Odessa, where they made their first fortune in grain trading and banking.

Maurice, 15 years senior to Béatrice, was one of several children sent to such cities as Vienna and Paris, to expand his family’s financial and social horizons – read The Hare with the Amber Eyes: A Hidden Inheritance by Edmund de Waal for a fascinating insight into the Ephrussi family. He certainly fulfilled his mission, by marrying Béatrice his own wealth was added to the Rothschilds’ boundless fortunes. With no children, the couple – particularly Béatrice – were free to devote their time to travelling the world, seeking cultural inspiration and collecting fine works of art, especially Old Masters, porcelain and sculpture.

During a number of family holidays on the Côte d’Azur, Béatrice fell in love with Cap Ferrat. So much so that between 1906 and 1912 she determinedly acquired the prime seven-hectare (17 acre) site on the Cap and began to commission and build her ‘new Eden’. Although the pink palazzo on the hill will fail to score many points with architectural purists, for most visitors today it’s a fabulously eccentric, beguiling and intriguing confection of Venetian, Renaissance and Moorish influences. Inspired by her ocean voyages on the great liner Île de France, the Baroness envisaged a house and garden that would remind her of a vast ship sitting high above the blue waters of the bay. Some 15 architects came and went, attempting to interpret her extraordinary vision for the house and gardens, so she must have been an exacting and demanding client. A visit to the villa will reveal just how successful she was in achieving the creation of her fantasy palace.

Upon entering the villa, you immediately find yourself standing in the patio couvert, almost as if you were walking into the central atrium of a cruise liner. It’s an impressive space, dominated by two floors of colonnades and arches in striking rose pink marble, that possess obvious Moorish and Italianate influences. High above is a trompe l’oeil ceiling, surrounded on all sides by a minstrels’ gallery where hidden musicians would play to entertain the guests below. This awe-inspiring, dramatic architectural centrepiece was doubtless conceived to make an immediate impression upon visitors and, unsurprisingly, it’s where Béatrice entertained guests at elegant receptions.

Those guests better acquainted with the Baroness would be invited into the Grand Salon, a striking room sumptuously decorated with 18th Century painted wood panelling, originally from the Hôtel de Crillon in Paris. It’s a bright, beautiful room where the views to the azure sea compete for your attention with many eye-catching and charming furnishings, including rare carpets from the Louvre and Versailles, and a whist table which belonged to none other than Marie Antoinette.

As you move through the villa, the mood changes from grand rooms with opulent furnishings and decoration, to the more intimate ambiance of Béatrice’s private apartments. In the boudoir and private bedrooms there’s a cosy feeling, with many personal details to delight the eye – fine antique furniture, much of it sourced from the royal courts and collections of Versailles, set against 18th Century painted panelling and collections of 19th Century Chinese clothing and shoes. The villa also contains one of the world’s finest collections of French porcelain, including vases, figurines, dinner services and commemorative pieces, with many examples by Sèvres and Vincennes.

On the first floor, you’ll want to make time to rest at the loggia, in order to appreciate the glorious views over the gardens and the bays to either side. This floor contains the Fragonard Room, with its beautifully preserved works by the 18th Century French artist from Grasse, a favourite of the Baroness. In addition, you’ll find the Tapestry Room and the Room of Monkeys, the highlight of the latter is a collection of Meissen porcelain animal figurines.

Inspired by her travels, Béatrice wanted the gardens of the villa to be as memorable as its interiors and so commissioned no less than nine styles of garden: French, Spanish, Florentine, Lapidary, Exotic, Japanese, Rose, Provençal, and the Garden of Sèvres. They were designed by some of the great names in horticulture and landscape design at the turn of the 20th Century, such as Harold Peto and Achille Duchêne.

From her commanding admiral’s view on the loggia, Béatrice enjoyed imperious views across the Med, while down below – ‘on deck’, as it were – her crew of 30 red pompom-adorned gardeners busied themselves. You can still enjoy all nine of these magnificent gardens today. In recent years, the villa’s ‘musical’ fountains have been restored and, at regular intervals, you can pause to enjoy the magical play of water and classical music. The only thing missing from this spectacular fantasy is Béatrice’s collection of animals. A nature lover, the Baroness filled her garden with a veritable private zoo of exotic birds and animals, many of which became pets and were allowed to sit with her as she received guests in her salon.

But never mind, what you miss out on with the animals you gain with a more recent addition – the delightful restaurant and tea-rooms which overlook the bay of Villefranche. Here you can sit inside in the luxurious tea room or outside on the spacious terrace, rest your feet and try to capture in your imagination the extraordinary, eccentric and romantic lifestyle that Béatrice Ephrussi enjoyed during her years here on Cap Ferrat.

The Villa Ephrussi-de-Rothschild is an essential part of any trip to the Côte d’Azur. If you can, try to visit on a fair day, when you cannot fail to be struck by the bright contrast of the pale blue sky, the sugar almond pink villa and the deep green of the pine trees and lush gardens, overlooking the vibrant aquamarines and azures of the waters in the bay.

Location: The villa is situated at Saint-Jean-Cap-Ferrat, which is 8 km from Nice and 12 km from Monaco. By road: Between Nice and Monaco, access by the Basse Corniche (N98). There is a free car park in the grounds of the villa. By bus: 81 and 100. By train: station of Beaulieu-sur-Mer. Ny plane: Nice Airport.

iPad and iPhone app: There’s a great app you can use as a visitor’s guide.

“I remember well the face of Mrs Maurice Ephrussi, née de Rothschild, a face with immaculately delicate features, framed by silver hair. She was always dressed elegantly in blue, with a ribbon of the same color, and a small fox terrier lying at her feet… Born into a limitless horizon of wealth, yet not conspicuous, except when she held generous parties and, I remember, in particular, one summer night, when we had the privilege to see, in her gardens, which drew from her mansion across to the sea, and bathed in moonlight, Anna Pavlova dancing to the Chopin nocturnes.” So the poet André de Fouquières wrote about the Baroness Béatrice de Rothschild, the creator of Villa Ephrussi de Rothschild.