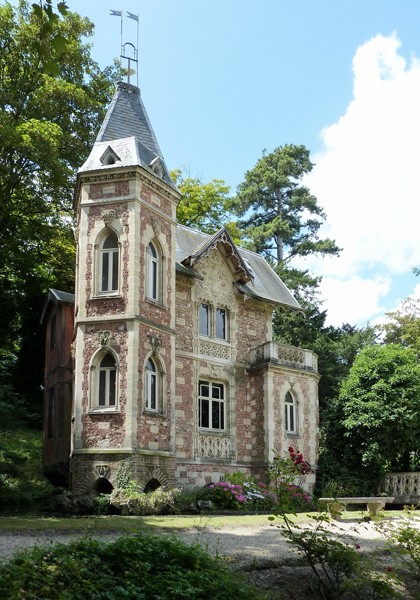 When an architect informed Alexandre Dumas that it would cost several hundred thousand francs to create the elaborate English-style estate he envisioned, the highliving French writer is said to have replied, “I certainly hope so!” Built in 1846, his fanciful country retreat in the hills of Le Port-Marly, some 12 miles west of Paris, reflects the vivid imagination Dumas employed on the pages of the best-selling novels that made him famous: The Three Musketeers, The Count of Monte-Cristo, The Man in the Iron Mask and other intriguing adventure stories.

He named his grand estate the Château de Monte-Cristo, and a visit to it begins with a walk along a wooded path and through man-made caves evocative of the exotic island grottos his hero Edmond Dantès explores while searching for hidden treasure in the castle’s namesake novel. The estate’s secluded location enhances the feeling that visitors might actually be stepping into one of Dumas’s dramatic and romantic tales.

The centerpiece of the domain is the three-story, Gothic-and-Renaissance-style château, its delicate ornamentation and scrollwork giving it the appearance of a pastry confection made of stone. The facade is covered with carved motifs of flora and strange fauna, angels and musical instruments. Two domes bear Dumas’s intertwined initials, and above the entrance is a sculpture of his face and the inscription J’aime qui m’aime (I love those who love me).

Opposite the petite castle is a hill with a gentle waterfall that Dumas insisted be added to the grounds. Sitting on the rise above the waterfall is a small neo-Gothic pavilion, surrounded by a tiny moat, that Dumas had built as his office. He humorously dubbed his workspace the Château d’If, after the notorious prison in The Count of Monte-Cristo—in fact a very real island fortress off Marseille, built by François I in the 16th century and used as a prison from the 17th to the 19th century. The eccentric little red brick and white stone edifice, with its pointy gabled roof, became his own personal fortress when he wanted to write undisturbed, and the titles of his novels, plays and travel diaries are carved into its exterior walls.

“I have created here a miniature paradise on earth,” boasted Dumas upon the completion of the Château de Monte-Cristo, and word soon spread about his storybook castle and gardens. With their curiosity piqued by rumors of its extravagance and eccentricity, the Parisian elite was eager to see the author’s masterpiece for themselves. In 1847, when 50 invitations for a housewarming party were sent out, an estimated 600 people turned up. After that, Dumas regularly held fêtes at the château, entertaining writers, actors and other illustrious guests including Victor Hugo, George Sand and Honoré de Balzac, who, in a letter to his companion Madame Hanska, described the Château de Monte-Cristo as “one of the most delicious follies ever created”.

Every room in the château explores a different facet of Dumas’s professional and personal life, offering a fascinating composite picture of the writer. Several rooms are devoted to his early life, his romantic liaisons and his children, his remarkable career and his literary legacy.

Alexandre Dumas was born in 1802 in Villers-Cotterêts, a village north of Paris, to an innkeeper’s daughter, Marie-Louise Labouret, married to one of Napoleon’s generals, Thomas Alexandre Davy de la Pailleterie. (The general was the son of the Marquis Alexandre Antoine Davy de la Pailleterie, a Norman nobleman who had emigrated to Santo Domingo, and a black African slave named Marie-Césette Dumas; he grew up with his father in Paris, but when he first joined the army he used his mother’s name, Dumas.)

The general died in 1806, but in spite of the impoverished childhood that ensued, the black-haired, blue-eyed young Alexandre went on to become a celebrated novelist, playwright, journalist, newspaper founder, theater owner and ladies’ man. The prolific wordsmith produced more than 300 works during his lifetime. His literary talent was inherited by his son and namesake, Alexandre Dumas fils (1824-1895), a successful playwright and author of the novel The Lady of the Camellias and other romantic works. Legend has it that Dumas père once said to Dumas fils “My best work is you, my dear son.”

Among the many fascinating details throughout the château are stained glass medallions set into the windows in the Games Room with symbols representing various chambers in the house; a portrait of Dumas’s granddaughter—whose mother was a Russian princess—hanging in the Music Room; porcelain statues of the swashbuckling three musketeers in the Cashmere Room; and in the Green Room above the fireplace, a vintage poster from a theater production of The Count of Monte- Cristo.

On display in the dining room is a white marble bust of the writer, along with a portrait of him with Hugo, Sand and other artistic notables. The table is lavishly set with silver and china, highlighting Dumas’s passion for the culinary arts. He was fond of eating out at restaurants, and asked famous chefs to share their secrets. He employed their techniques when he hosted dinner parties, for which he often planned the menus and cooked the food himself. Eventually Dumas took his interest in gourmet cuisine well beyond the kitchen. “I want to finish the 500 volumes of my literary work with a cookery book,” he declared, and went on to add the Le Grand Dictionnaire de Cuisine to his oeuvre (which never quite reached the 500 mark)

The Central Room illuminates a lesser-known facet of Dumas’s literary career: travel writing. Although best remembered for his derring-do novels, he also produced several volumes about his real-life escapades in Italy, Russia, Switzerland and other countries. In his Memoires he wrote, “Traveling means living, in the fullest possible sense of the word.” His love of travel is most apparent in the lavish Moorish Room, the jewel of the château. In 1846, Dumas toured Tunisia, and returned from the North African nation with craftsmen who transformed one of the château’s rooms into a luxurious, exotic salon. With an intricately carved stucco ceiling and walls, stained-glass windows, colorful mosaic tiles and ottomans covered in sumptuous fabrics, the Moorish Room incorporates features Dumas had seen at the governor’s mansion in Tunis and at the Alhambra Palace in Granada, Spain. During the restoration of the château in 1985, King Hassan II of Morocco, a great admirer of Dumas, financed the salon’s refurbishment.

Despite Dumas’s reputation for exuberant entertaining, he claimed in his work Adventures with My Pets to “prefer the solitude of the terrestrial paradise—that is to say, a solitude peopled with animals”. The park surrounding the Château de Monte-Cristo was home to numerous dogs, a cat, three monkeys, two parakeets, a golden pheasant, a tame vulture and other creatures.

Dumas died penniless in 1870 but remained a consummate raconteur to the end, saying of death, “I shall tell her a story, and she will be kind to me.” In 2002, under a decree by French president Jacques Chirac, Dumas’s remains were taken from his birthplace of Villers-Cotterêts to Paris and interred in the Panthéon, the traditional mausoleum for the country’s most notable political and cultural figures. “He will finally take his place beside Victor Hugo and Emile Zola, his brothers in literature,” said Chirac to the thousands who attended the ceremonies. En route to the capital, the coffin—draped in a blue velvet cloth bearing the world-renowned motto “All for one, one for all” from The Three Musketeers—remained for one night at the author’s beloved Château de Monte-Cristo.

Originally published in the October 2010 issue of France Today; updated in February 2012