As we drove up the hill and around the bend, a magnificent, regal château suddenly appeared and took my breath away. Perfectly symmetrical with a large garden and pond with fountain in front and framed by trees in the background, the Château d’Artigny is truly one of the most sumptuous places I have ever stayed. With 56 rooms, eight lounges, two dining salons, a pool and spa, guests are well taken care of.

Located in Montbazon in the Loire Valley, 15 kilometers from Tours, the 65 acre grounds are a manicured oasis of quiet nestled on a hill looking out over the Indre Valley with the Indre River flowing peacefully below. Besides the château, there are two smaller properties, Ariane Pavillon and Fragrance House, that also include guest rooms.

As I entered the spacious Belle Époque lobby, I was overcome by its size, beauty and grandeur. Though there is an elevator, glide up the elegant curving staircase that leads to rooms on the first floor. Pass by larger rooms to the Rotunda to appreciate the view out over the valley and look up to marvel at the trompe l’oeil ceiling fresco. Wide corridors lead to smaller rooms, individually decorated. Our corner room had a warm yellow printed fabric on the walls and apricot upholstered chairs, all with a slightly Asian motif, creative and super comfortable.

This property has a fascinating history. Originally built near the keep of a fortification at Montbazon during the Hundred Year’s War, the chateau was incorporated into a line of defenses along the Indre River. It was demolished in 1769 by the owner, treasurer of King Louis XV, who replaced it with his own private residence. It was modified over the years and purchased in 1912 by the renowned parfumer, François Coty, who was captivated by the location. Not liking its placement near the cliff, M. Coty had it demolished and rebuilt, keeping the 18th century style, only 12 meters away on a new foundation. The chateau is almost a mirror image of Château de Champlâtreux in Val-d’Oise.

The project continued from 1919 through 1928. At this partial completion it had employed over 150 workers including architects, sculptors, craftsmen and various other labourers. Magnificently decorated, it included four master apartments. From 1929 until his death in 1934, M. Coty lived there half of the year with his family. The Rotunda was his office where he had the dome painted in tromp l’oeil to portray his family and friends at a costume ball. The original painting was destroyed but recreated by the present owner to capture the originality of the space.

After the Wall Street crash of 1929, a disastrous divorce and a seriously diminished fortune, M. Coty’s extensive art collection was sold at auction to atone for his debts. Between 1941 to 1942, the chateau was occupied by German troops and painted a camouflage brown. It was then annexed to the Tours Hospital as an outreach facility to care for the wounded.

In 1947, his daughter Christiane Coty inherited the estate, made a few changes but decided to put it up for sale. It was then acquired as a second property by the founder of Grandes Étapes Françaises, a hospitality collection, and after extensive remodeling, it was converted into a luxury hotel that opened in 1961.

Our evening began with an aperitif and hors-d’oeuvres on the veranda behind the chateau, facing the valley and evening sky. Dinner was inside, in the Origan Restaurant. We chose the potager menu, showcasing fresh vegetables from the garden. There are 45,000 bottles of French wine in the cellar, and we were advised by the sommelier and chose a Couly Chinon to complement our meal. The following morning, petit déjeuner was a copious buffet assortment of delights. We contentedly strolled through the gardens and tried to etch in our memory each remarkable detail of this extraordinary property.

Related article: The Châteaux of the Loire, a Royal River 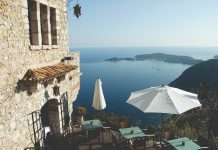 Sleep in a Chateau: Unusual Accommodations in France 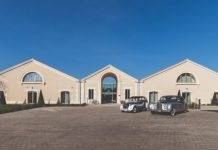 Where to Stay and Eat in Old Poitou-Charentes 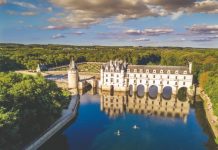 Valley of Queens: Follow in the Footsteps of the Loire Valley’s Female Icons