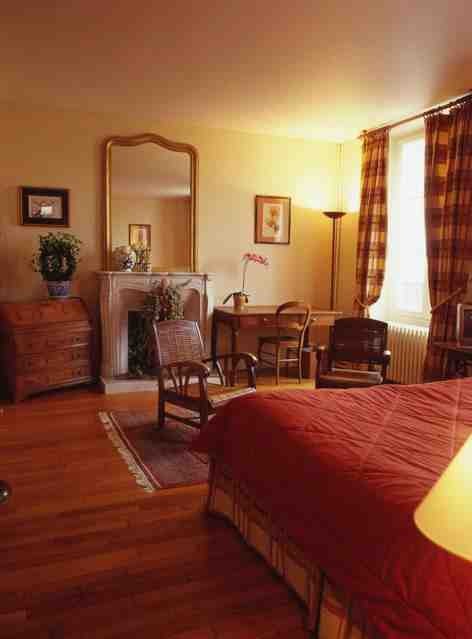 Longing to get away from the city for a brief excursion à la campagne? No need to travel far to find forest walks, country produce and cozy fireside evenings. Just outside Paris, Gîtes de France in four départements of the Ile-de-France region offers a multitude of delightful B&Bs. And if you travel by train or RER suburban train, your hosts will pick you up at the nearest station.

At Nainville-les-Roches, in the Essonne département, the estate that once belonged to tennis champion and pop singer Yannick Noah is now a B&B well worth a detour. It’s set in more than an acre of gardens with an immense copper beech tree, a rare weeping cedar and, of course, a tennis court, but also a pool, sauna, boules court and—how can you resist?—a trampoline at your disposal. Geneviève Soton, a former credit manager for a large company, decided to change her life when she discovered this country home adjacent to an exquisite village church and returned to the pleasures of nature. Eighteenth-century farm buildings house five guest rooms named for spices, each with its own entrance and pleasantly decorated. Just 30 miles from Paris, guests can enjoy a wine-tasting session, paint a watercolor, bike along a towpath by the Seine or visit Milly-la-Forêt or the royal city of Etampes. Not to mention the “flying museum” of Cerny-La Ferté-Alais, whose collection of planes is one of the most astonishing in Europe.

A peaceful stream, opalescent light, silvery mist rising to the treetops, canals and medieval lanes—there’s no end to the charms of the Vallée du Grand Morin, whose singular beauty has always attracted artists, from Camille Corot to Edward Steichen. At the entrance to Crécy-la-Chapelle, a small town built on several small arms of the Grand Morin River—sometimes called the Venice of the Brie—in the département of Seine-et-Marne just 26 miles east of Paris, the Moulin de Saint-Martin is particularly popular with English and American visitors.

Visitors who prefer not to drive can take the RER to Marne-la-Vallée, then the 59 bus to Crécy-la-Chapelle, where owner Bernard Gourbaud will meet them. Gourbaud’s grandfather bought the property, which includes a 16th-century mill set on an island, in 1933. There are just two rooms: Les Anges on the first floor and Les Nymphes on the second. The decor is quietly elegant, with toile de Jouy fabrics, 18th-century furniture and beautiful tapestries. Gourbaud and his wife Agnès offer a table d’hôtes in the evening (delicious chicken with moutarde de Meaux) and, in good weather, breakfast—which includes confitures of pumpkin, pineapple or kiwi—is served on a terrace filled with exuberant vegetation.

A stay here is recommended not only for contemplative souls, but also for hikers: the GR1, one of the Grandes Randonnées trails, passes right in front of the mill located on the property. The area is a paradise for hunting and fishing, especially for pike. There are also boat rides and painting classes available, along with visits to the Crécois countryside or Disneyland Paris.

The French poet Charles Péguy (1873-1914) stayed in this villa, in Saint Witz in the Val d’Oise, just before his death. Carefully restored, the house retains its 19th-century facade and its lovely proportions, while the interior has been decorated with an eye to comfort and modern minimalism by owner Bruno Guatieri, using old marble, delicate patinas, lacquered metalwork and silk curtains that beautifully filter the light. On the first floor, the Charles Péguy room plays on contrasts, with wide black and white stripes; the two rooms on the second floor, L’Antique and L’Alcôve, are done in soft shades of gray. Bathrooms have been fitted with designer basins and footed bathtubs. Most of the furnishings are Italian, reflecting Guatieri’s origins and his admiration for his grandmother Brigida, “a formidable cook, born in Molise, the truffle country near Abruzzo”. Guatieri, who cooks dinner for his guests every evening and happily offers cooking classes, seems to have inherited her culinary talent—judging by his seafood ravioli, his Sorrentina lasagne and his panna cotta—as well as an Italian sense of generosity and conviviality.

Saint Witz is easily accessible from Paris, just 19 miles away on the A1 autoroute. You can also take the RER to Fosses or Roissy. But you’ll feel like you’ve traveled much farther, deep into la campagne, when you visit the nearby forest of Montmorency and the towns of Senlis and especially Chantilly, with its wonderful château housing the rich Musée Condé, and the Grandes Ecuries, the handsome stables with live equestrian performances.

Set in a park of 100-year-old trees, this house in the pretty village of Neauphle-le-Château, in the Yvelines departement, has a proud look, with its Napoleon III facade and its conservatory, an ideal spot for breakfast. The Clos Saint Nicolas offers three upstairs rooms, full of charm, accessible by a separate staircase. Marie-France Drouelle has used color to liven up the rooms—red, yellow and green—and the furniture is a harmonious mixture of old and new (including TV and wireless computer access). All three rooms open onto a comfortable little salon decorated with early 19th-century portraits, where Parisians guests mingle with American, Dutch or Russian visitors. Since the village is only 22 miles from Paris, “many of our visitors come on the train from the Gare Montparnasse, especially to visit Versailles,” says Madame Drouelle, “but we also show them Montfort L’Amaury, Dampierre and Port Royal.”

Originally published in the November 2009 issue of France Today; updated in March 2012